Life along the creek

One writer takes a walk and discovers more than scenery 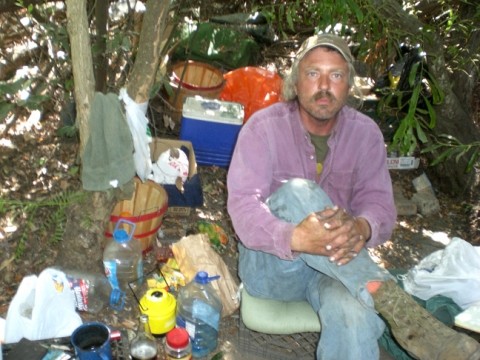 # camp just off of the Los Osos Valley Road Highway 101 offramp. The picturesque location and easy access to outdoor amenities made us wonder why we even considered paying more than $1,000 a month in rent.

After we parked, we headed northbound under the overpass, it didn't take long before we found the first of many creekside campsites.

It was constructed of scrap wood and had tarps drawn over the top for additional weather protection. Well-worn shoes and clothing hung out to dry. Bottles of cheap malt liquor and empty food containers littered the site. It smelled like stale urine.

But the spot was well isolated, close to town, and if you closed your eyes and used your imagination the sound of the highway's busyness combined with the light tinkle of the shallow creek could transform into something similar to an oceanic soundtrack. The occupants were nowhere to be found.

But while backtracking, we stumbled across Eric Olson's campsite. After we assured Olson, 46, that we weren't law-enforcement officials, he went back to sipping his Magnum 32-ounce beer out of a tin mug and writing a letter of request to the owners of the land he was occupying.

What began as an underground exploration of the city changed into the tale of a homeless community situated near one of San Luis Obispo's most traveled roads. We knew we had stumbled upon the real life of the creek.

Life in the open
Olson said that county rangers discovered his camp a couple days before we did and told him he had to pack up and get out unless he could get the landowners to sign a letter saying it was cool if he squatted on their land. He said that the landowners are aware of his occupancy and don't have a problem with him staying there, but even with what he says is a spoken agreement between both parties, Olson is uncertain whether they'll sign a release form. If they don't consent to him living on their land, Olson plans on loading up his two tents, his Costco supply of canned beans, and his various bicycle rims and moving a couple of miles down the creek.

Olson said that he's been living at the spot for nearly a year and that he's come across various law enforcement agents and county officials, all of which except the most recent encounter with the rangers haven't disturbed him.

After getting word about the bum-friendly Central Coast lifestyle last October, Olson fled the shady North County San Diego street scene and came to this county via Greyhound bus.

"This place is safe," he said of SLO. "I don't have to worry about my privacy. The cops are a joke around here. Back in Oceanside, they don't mess around they'll slam you on the ground!"

Besides the beer he regularly consumes, Olson says his diet is top notch mainly because he normally dines from the Trader Joe's Dumpster.

"It's excellent food organic fruits and vegetables," he said. "Last night I ate a steak I got from there. I microwaved it in a Mexican's trailer."

In addition to Dumpster diving, Olson says he makes his way by recycling and pick-up landscape work.

Though he hasn't experienced any problems with other creek dwellers stealing his supplies, he prefers to live alone, away from the larger campsite just down the creek.

Though I was unable to obtain actual figures and statistics on the people living there, it appears to be home to more than a dozen occupants. We talked to one inhabitant, a young woman from Nipomo, who appeared ready to give birth at any moment.

She said she'd been "just kicking it" at the creekside homeless site for about a week and prefers it to the Prado Day Center a SLO homeless hostel.

"I was staying at the shelter, but there's so much drama over there I didn't want to stay," she said.

Location, location, location
"SLO honestly is great place to be homeless because we have a lot of resources and people that help. It's like a hidden garden for the homeless," said LaShea Nelson, the Economic Opportunity Commission's intake specialist for homeless services. "This is a beautiful area and some of [the homeless] enjoy where they are at.

"A lot of them don't like to stay in homeless shelters because they feel slightly confined and are being monitored," she explained.

Back near the creek, the pregnant woman said that she has a lot of friends at the outdoor site who look out for her, which makes it relatively comfortable.

"Besides not having water, it's pretty easy to live here," she said. "Everybody helps out. It's good to get away from the bullshit."

When asked what she plans to do when it's time to deliver her baby, she laughed and replied, "Go to the hospital."

Immediately after I asked if I could take a picture, the interview was over.

After walking out of that campsite, we looked across the once-farmed land where there are now houses. We talked to homeowner Lyn Flanders, who has lived across from where the campsite is for the past 17 years. She said having a community of homeless people living across the field is very uncomfortable.

"We have children in the park and some of us are widows, so it's scary," she said. "It looks messy and it's definitely not good for our property value."

Flanders said that some of her neighbors have experienced burglaries and they suspect that the homeless people "wandering around like zombies" are responsible.

Despite the reported crime and lack of visual aesthetics, Flanders says she still feels semi-sympathetic for her homeless neighbors.

"I feel badly for them because they don't have a place to live," she said. "But there are services in the county that they could take advantage [of]. It's a sad situation, and I'd like to see it cleaned up."

In an effort to help spruce up the creek, the Land Conservancy of San Luis Obispo will host a clean-up day on Sept. 29 at 9 a.m.

"People do live in the creek corridor and we consider that not just an environmental problem, but a social problem," said Brian Stark, executive director for the SLO Land Conservancy. "We do care about the homeless, and it's a big problem. But I don't think people who are living in the creek are antagonistic to our goals."