Life is beautiful, until it's not: SLO Little Theatre's production of 'Cabaret' keeps audiences captivated

Smiling, beautiful girls (and boys) who are scantily clad blow you kisses before the big opening number kicks off. Everyone here is laughing and happy, but only until the curtain closes.

Welcome to the Kit Kat Club, a popular Cabaret house among a certain set of gentlemen in 1930s Berlin, Germany, and the main setting for the San Luis Obispo Little Theatre’s musical production of Cabaret, directed by Kevin Harris, with musical direction by Lacey McNamara and choreography by the Civic Ballet of San Luis Obispo’s own Drew Silvaggio. 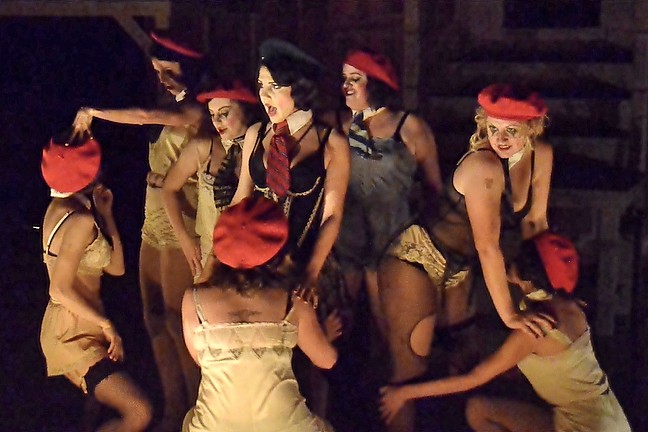 Smoke hits you in the face as the theater doors open. It’s dark with red lights beaming to set that seductive, seedy tone. Anything could happen here.

The charming, impish, and delightfully trans M.C. (Toby Tropper) of the Kit Kat Club welcomes you. “In here, life is beautiful. The girls are beautiful. Even the orchestra is beautiful! Leave your troubles outside! Life is disappointing? Forget it!”

But just outside a war is brewing as Adolf Hitler begins his climb to power. Inside the club, things aren’t always beautiful either. Lead cabaret singer, the very British Sally Bowles (Holly Halay), is told minutes before the New Year starts by the deplorable club manager (John Mackey) it’s time for a new face to lead the cabaret. Enter The charming, earnest (and bisexual) American author Cliff Bradshaw (Mike Fiore). Looking for inspiration for his next novel, Cliff heads to Berlin where he finds himself at the Kit Kat Club on the recommendation of Ernst (Gregory Gorrindo), a friend he met on the train with ties to a mysterious political party.

Even though Cliff runs into one of his former boy lovers at the club, he falls head over heels for the seductively captivating (but also crazy) Sally. When Sally is fired from the cabaret, she worms her way into staying with Cliff in his room at a nearby boarding house, and a relationship is born. When—surprise, surprise—Sally finds herself pregnant, Cliff tries to convince her to keep the baby and have a life of domestic bliss with him. But caged birds do love to fly. 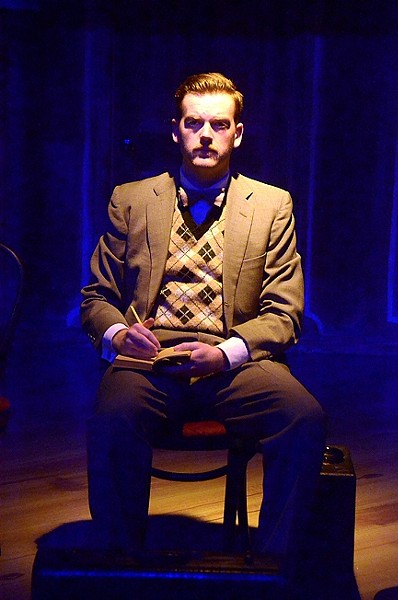 While Cabaret runs long (the first act alone is 90 minutes), it feels like no time at all has passed as you settle in to the simultaneously cozy and unsettling world of the Kit Kat Club. Enchanting and provocative little songs and dance numbers keep the show moving at a nice clip, making you forget that everything isn’t beautiful, until the show comes to a jarring halt, making a very pointed comment about the state of Nazi Germany.

Outside of the club, aging spinster and landlord at Cliff’s boarding house Fraulein Schneider (Jackie Edwards), reconsiders a chance at happiness in marrying Herr Schultz (Michael Siebrass) because he’s Jewish and she fears what will happen if the Nazis take over the country. The musical number “If You Could See Her,” sung by the M.C. as he dances with a girl in a gorilla costume, ends with a line that somehow in 2016 is still shocking.

“But if you could see her through my eyes, she wouldn’t look Jewish at all.”

Cabaret is an entertaining, fast paced musical with a triple threat cast, but above all it’s a pointed reminder that evil is often dismissed, and overlooked just when it’s about to spread.

Ryah Cooley is dancing the can-can at rcooley@newtimesslo.com.