'Life of the Party' is an OK time

LIFE OF THE PARTY

From writer/director Ben Falcone (Tammy, The Boss) and his co-writer/wife Melissa McCarthy (Ghostbusters, Bridesmaids) comes the summer comedy Life of the Party. When her husband, Dan (Matt Walsh, Brigsby Bear, Elf), suddenly dumps her, longtime dedicated housewife Deanna (McCarthy) turns regret into reset by going back to college ... landing in the same class and school as her daughter, Maddie (Molly Gordan, I Am Sam), who's not entirely sold on the idea. Plunging headlong into the campus experience, the increasingly outspoken Deanna—now Dee Rock—embraces freedom, fun, and frat boys on her own terms, finding her true self in a senior year no one ever expected. Editor's note: Arts Editor Ryah Cooley and Staff Writer Karen Garcia took one for the team this week and wrote Split Screen. Senior Staff Writer Glen Starkey and his wife, Anna, will be back next week.

Ryah I've enjoyed Melissa McCarthy's work ever since she was in Gilmore Girls. That said, I didn't have super high hopes going into The Life of the Party. McCarthy's films as of late have become a bit repetitive, not bad, but not great, and always leaning heavily on a particular brand of over-the-top, crude comedy. Don't get me wrong, I loved it in Bridesmaids, but a handful of films later, it's starting to get stale. The premise isn't terribly original. After her husband leaves her for another woman, Deanna, who dropped out of college when she got pregnant with their daughter, Maddie, decides to back to school to finally finish her degree ... at the same college her daughter is attending! Shenanigans ensue! Insert awkward mother-daughter walks of shame and '80s themed college parties with way too many shots of cheap tequila. This time around, with a PG-13 rating, McCarthy, leaned on a sweeter, awkward brand of mom humor complete with dorky puff-paint-adorned sweaters and a woke sense of feminism. It was a refreshing change of pace.

Karen After Bridesmaids, McCarthy really made a name for herself as a female lead comedian in her other films like Tammy and Identity Thief. I give her that much in a time when males like Will Ferrell, Ben Stiller, and Jack Black dominate the comedic film scene. While I began to enjoy her breakthrough in comedic films, I have to agree that it fell flat after a while. She seems to play the same kinds of roles or maybe it's the same kinds of scripts—I don't really know who's to blame. While I did have a couple of burst-out-laughing moments, the film was overall forgettable. Deanna has to find herself again after going through a divorce with a real ass of an ex-husband who, dun dun dunnn, is having an affair with a realtor. She goes back to college to finish off her senior year but being out of the university game has left Deanna a little lost. I mean that's what college is about right? Finding out who you are? It's pretty cliché, I know. Aside from her love for archeology, Deanna is down to clown with Maddie and Maddie's sorority sisters. The transitions from one part of the film to the next were really choppy and abrupt. It made the most awkward scenes, like Deanna sleeping with a frat boy in his 20s (I'm assuming), weirder than it had to be. 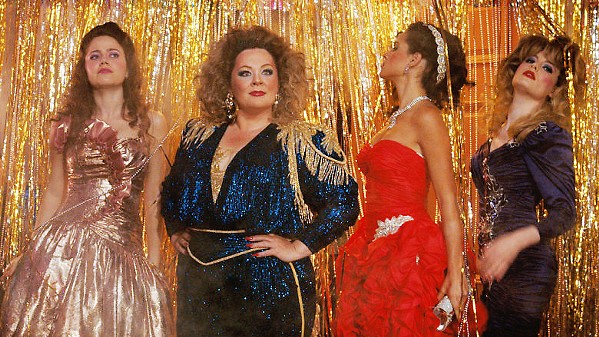 Ryah Due to the PG-13 rating, you won't actually see any scenes of McCarthy banging Jack (Luke Benward, Field of Lost Shoes), Maddie's boyfriend Tyler's (Jimmy O. Yang, Patriot's Day) BFF. They do play that May-December relationship as Jack being in love with Deanna, rather than some weird MILF fetish, which is kind of sweet, I think? Maya Rudolph (Bridesmaids) is hilarious as Deanna's ultra supportive smack-talking bestie. Julie Bowen as the realtor, Marcie, who steals Deanna's husband, just comes off as a mean version of her type-A mom character from Modern Family. Chris Parnell (Anchorman) is charming as Deanna's pun-cracking archaeology professor. Leonar (Heidi Gardner, Saturday Night Live) is perfect as Deanna's super creepy and weird roomie with an aversion to sunlight. Gillian Jacobs (Don't Think Twice) is Maddie's slightly older sorority sister who takes a shine to Deanna when they bond over a shared hatred of a mean girl. Gordan as Deanna's daughter is utterly bland and forgettable. McCarthy's character could have had no daughter and simply had a midlife crisis and chosen to go back to college, and the film would have been about the same. This film isn't Bridesmaids level great, nor is it worth spending $15 at the movie theater, but I would perk up a little bit when it came to my local RedBox.

Karen I give this film a flunking grade, as it wasn't something I'd go to the movies to watch. These characters are just really bland, they belong to a fraternity that's lame, go to parties that don't even get remotely wild, and don't have any interesting encounters with any guys. Even the mean girl isn't that mean. What am I missing? The craziest thing that happened in the film is that a famous singer made a guest appearance to perform at the sorority house—and not an entire song, mind you. I wish this were funnier, especially because McCarthy and her husband, a comedic match made in heaven, wrote the script. It was just a very mom-jeans and ugly-cat-sweater sort of flick that was lacking in humor. Δ