San Luis Obispo is home to a variety of places to eat, but when you’re looking for a place that’s truly out-of-this-world, there’s only one option: Pluto’s. 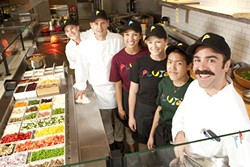 Pluto’s opened its doors on March 27 and offers American, or California-style, food made right before your eyes. It features huge, freshly made sandwiches and salads that could probably fill a crater on the moon. Let’s just say there’s a better chance of an apocalyptic meteor striking the Earth than there is of you leaving hungry, and you may have to loosen your belt a notch or two after your meal.

Owners Louis Kimball and Gerry Bugas, both graduates of the Cornell University Hotel School, opened the first Pluto’s in the Marina District of San Francisco in 1995. While they were living in the city and working at the Stanford Court Hotel, they began the initial Pluto’s conversations that started over dinner at a pizza parlor.

“We started talking about why can’t you find that food—not fast food, not full-service, but something truly in-between. Something that we would want to go to, meaning you can get certain food served on china and glassware,” Kimball said.

Kimball’s goal was to create a sophisticated, comfortable environment where people could get restaurant-quality food for a near-fast-food price and sit down quickly with their family or a friend without having to wait on the staff or worry about a tip.

With seven other stores opening for business in the Bay Area since Pluto’s founding in 1995, the San Luis Obispo location marks the first expansion into the southern side of California. However, Kimball is quick to denounce any claims of Pluto’s being a chain-restaurant.

“We came up with the concept and started it, so that’s why people think ‘Oh, you’re part of some big chain or franchise,’ but we’re really not. We’re both really hands-on owners and will be in and out frequently,” Kimball said. “We want people to feel comfortable here, like it’s their extended kitchen. We want people to be walking around town and know the guys from Pluto’s.”

To further distance themselves from a typical chain or fast-food joint, Pluto’s strives to capitalize on the little things, like inviting its customers to come back and refill their drinks at any time of the day, or to leave their leftovers in the kitchen while they finish their shopping.

While its name is derived from what used to be the ninth planet from the sun, Pluto’s doesn’t overdo its celestial theme. Newcomers might expect to see rocket ships or asteroids hanging from the ceiling with a Cal Poly student disguised as an astronaut taking your order, but the restaurant actually has a sophisticated look. In fact, the only really spacey-looking decorations are some lights in the front that resemble stars, but even with those, customers still feel confident that they’re indeed on Earth.

Pluto’s celestial theme can best be seen on its menu. You might never find items like “Saturn Potato Rings” ($2.35 with or without garlic) or “Martian Mac & Cheese” ($2.65) at other restaurants, but such things are the norm here.

Something else you probably won’t find at even the more pricey restaurants is freshly cooked meats of all kinds that are cut in front of you the moment you order. With options like chicken, tri-tip, and turkey, the salad and sandwich possibilities are seemingly endless. In fact, combined with their Smashed Spuds ($2) and Neptune’s Stuffing ($2), Thanksgiving dinner is an option every day of the week.

To wash down your meal, Pluto’s offers a small local beer and wine selection, in addition to freshly brewed iced teas and a soda fountain.

“We can tell SLO has a great food scene, but there’s nothing quite like Pluto’s here, so we’re trying to add a new dimension to the food scene,” Kimball said.

Come to Pluto’s at 1122 Chorro St. in downtown SLO. For more information, call 439-3200 or visit plutosfreshfood.com.

The San Luis Obispo County Arthritis Walk takes place Saturday, April 27. Participants can walk for one mile or three miles at the O’Neill Green on the Cal Poly campus and can stick around after for food, entertainment, a kid’s zone, and a health expo. Registration starts at 8 a.m. and the walk starts at 9:30 a.m. For more information, contact Asher Garfinkel at 563-4685 or agarfinkel@arthritis.org.