Volunteer with CCCMB to keep them open 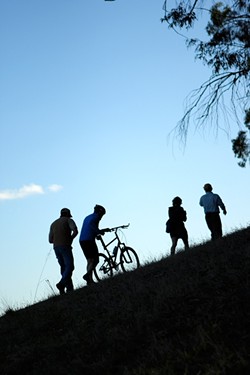 Next time you trample one of the dozens of local trails that stretch all the way from Lopez Lake to Big Sur, thank Central Coast Concerned Mountain Bikers. They probably built it. Over the past 20 or so years the group has managed to plan and build most of the local bike and hiking trails in the county—and at minimal cost to the taxpayer.

The key to their success is their use of volunteers, who show up sometimes more than a hundred strong. Even with such community support, however, several recent and pending land grants will require even more volunteers.

If one thing is more impressive than what the group has already accomplished, it’s what they hope to get done in the next 18 moths. All they need to do it is you.

CCCMB got their start in 1986, with the looming closure of Montaña de Oro State Park to mountain bikers. A small group of cyclists contacted the State Parks Trails Committee and offered to rebuild some badly abused trails. They brought their own tools and fixed areas that were eroding or in danger. Not long after, the group officially bonded under the CCCMB moniker and started taking on more projects. They approached Cal Poly about getting bikes into Poly Canyon—they literally hauled out rocks, broken glass, and debris with mules to accomplish the goal. From there, CCCMB started building trails at Lopez Lake, Cuesta Ridge, Dairy Creek, and Cerro Alto and in the process gained a reputation with the powers that be. Now when a city or the county, the federal Bureau of Land Management or State Parks want a trail built locally, they call CCCMB. And lately, the phone has been ringing.

John Cutter, a longtime member of CCCMB, said their success has a lot to do with bridging gaps between different types of trail users, mainly cyclists and hikers.

“As a mountain bike group,” Cutter said, “we’ve been able to create a good dialogue between user groups; there’s no reason we can’t all get along.”

Bridging the gap has meant bringing together hundreds of volunteers. The group logged 3,500 volunteer hours in less than a year and a half, according to their website. Using that many volunteers effectively is another marvel. CCCMB organizes small teams that include at least one experienced trail builder—the crew leader—and some newer shovel operators. Building a trail right the first time, according to long time member Frank Zika, is everything.

“Trail design is always evolving,” Zika said. “What we thought was proper trail building 20 years ago has changed.”

Zika noted that in the beginning, the group spent a substantial amount of time just repairing trails they had already built or fixed. The sheer number of trails they look after now makes it imperative that the trails are more sustainable. It’s another reason CCCMB has become the go-to trail builder.

In 2008, the city of SLO acquired a chunk of open space they call Johnson Ranch, near the intersection of Higuera Street and Ontario Road. The city wants to have a network of new trails finished there by this summer, and if two adjacent properties are attained by the city through a grant of open space, CCCMB could be entangled in trails that reach all the way from Irish Hills to Ontario Road.

Still more ambitious is the Avila Ranch plan: The 2,400-acre property, which reaches all the way from Avila Beach to Montaña de Oro, will become the site of the most impressive network of trails in the county. The state wants to have trails built over 1,500 acres in the next 18 months. It’s a tall order, even for seasoned trail builders. That’s where the volunteers come in.

CCCMB doesn’t organize hikes, or trail rides, even though the volunteers obviously have that as a common interest. Their only ambition as a group is to build and maintain the trails. They have monthly events where they provide food for volunteers and because of the way they are set up, anyone can volunteer and get on-the-job training. The next big trail builds are scheduled for Jan. 10 and Feb. 1.

Kylie Mendonca can be reached at kmendonca@newtimesslo.com.