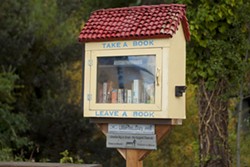 Steinbeck’s Cannery Row, a collection of short stories by Flannery O’Connor, the British murder mystery Death of a Cozy Writer, one fifth of the Percy Jackson and the Olympians pentalogy, the occasional surfing magazine—you could find these at your local library or bookstore, but they might just be available in your neighbor’s front yard. That is if you happen to live near the Teitge family of San Luis Obispo, the proud owners of SLO’s only registered Little Free Library.

Typically resembling a large house-shaped (or library-shaped) mailbox, Little Free Libraries are essentially a box filled with books placed outside a residency or business so community members can borrow a book and leave one of their own for someone else to borrow.

The first Little Free Library was built in 2009 by Wisconsin resident Tod Bol in honor of his mother, a former teacher with a love of reading. Bol built the library as a model of a one-room school house, put it on a post in his front yard, and it became a big hit with friends and neighbors. He went on to build several more that he gave away and eventually helped create the phenomenon that exists today, with an estimated 10,000-12,000 Little Free Libraries in existence worldwide.

One of those libraries was built by Stefan Teitge, an emergency room physician. Teitge built his family’s library in 2012 as a Mother’s Day present for his wife Tara, who learned about the concept on the Oprah Winfrey show and was interested in helping to promote literacy.

“That’s something that’s important to our family to try and promote as much as possible,” Stefan said.

After sending a letter to his neighbors to make sure they were on board with the project, Teitge spent about three weeks constructing the library—the majority of that time dedicated to installing the Spanish-style roof he made from pieces of PVC pipe painted an orangeish-red. Once the work was completed the Teitges held a ribbon cutting ceremony with their sons, Bobby and Graham, to unveil it to the neighborhood.

To make it official, the Teitges registered their library on the Little Free Libraries website, which enables users to search by city and state to find one near them. In addition to the Teitges’ library there are currently two others registered in SLO County—one in Paso Robles and one in Arroyo Grande. To learn more visit littlefreelibrary.org.

Last Stage West BBQ will host a benefit dinner concert for the Alzheimer’s Association on Dec. 28 featuring local acts Cuesta Ridge, Pismo Spanky, and BanjerDan. Tickets are $100 and can be purchased at Cheap Thrills in SLO, Wild Horse Winery in Templeton, Central Coast Music in Morro Bay, and Last Stage West BBQ in Atascadero. The concert can also be viewed online for a minimum donation of $5. For more info go to laststagewest.net.