The Art of Dissent—featuring political art from Mark Bryan, Elizabeth Chaney, Robbie Conal, Colleen Marlow, and Lena Rushing—will be on display through Nov. 8 at Linnaea's Café, 1110 Garden St. in downtown SLO. Linnaea's opens at 6:30 a.m. daily, closing at 7 p.m. Monday through Wednesday, 8 p.m. Thursday through Saturday, and 4 p.m. on Sunday.

If you're in the mood for an epic takedown of all things Trump, get thee to Linnaea's Café for The Art of Dissent, a five-artist political art show featuring works by Mark Bryan, Elizabeth Chaney, Robbie Conal, Colleen Marlow, and Lena Rushing.

"The inspiration for this show was the Women's March last year," Linnaea's Café owner Marianne Orme explained via email. "I kept seeing all these amazing signs of powerful people drawn in the same style. I knew I wanted them to appear more publicly, and I wanted it to be in October and November to cover the election. As I spoke with people at the march, I found out the artist was Robbie Conal, and it snowballed from there." 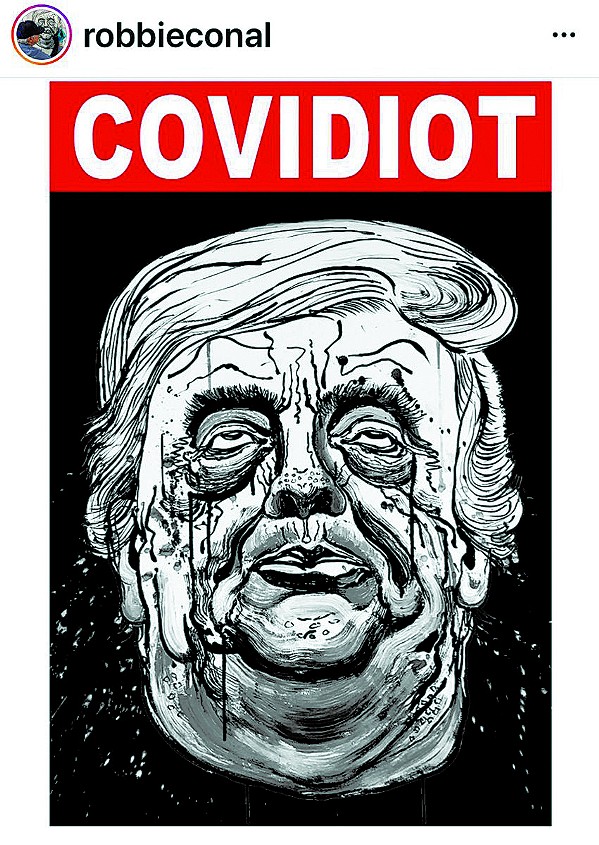 Conal's distinctive style is hard to miss. The artist paints gnarled, often grotesque portraits of politicians, which he's done since 1986, when, according to his bio, he became fed up with the Reagan administration's "rabid abuse of political power in the name of representative democracy." So he began making satirical portraits of politicians, which he would reproduce and hang guerilla-style throughout a city. The Washington Post called him "America's foremost street artist."

The show's second most famous artist is Mark Bryan, who started excoriating conservatism during the George W. Bush reign, which he's continued with Donald Trump, who he's skewered with a relentless, hilarious, and satirical intensity. 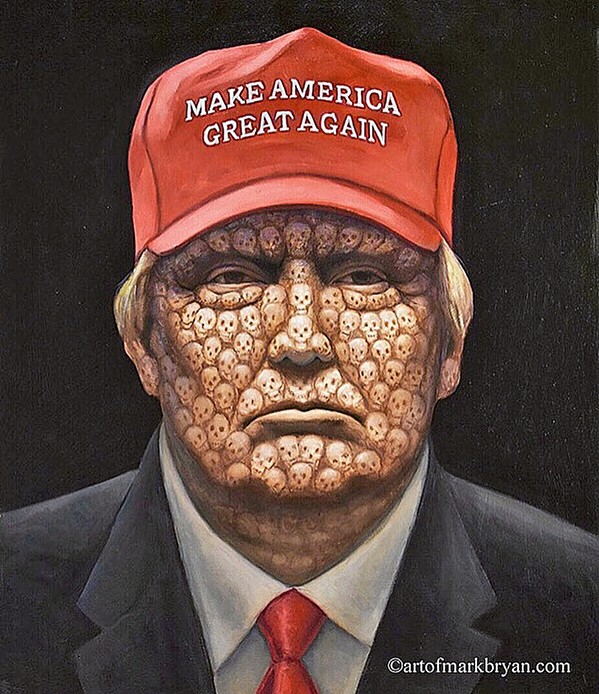 In his artist statement, he quotes Leon Trotsky: "You may not be interested in war but war is interested in you," adding, "When the circus turns especially ugly or when a good idea appears, I feel the need and responsibility to make some kind of comment. Humor and satire have been my way to confront serious topics, which are often too grim to portray directly."

Bryan's 200,000 depicts Trump wearing a MAGA hat, but his face is made of tiny skulls. Another painting, Too Much Trump, refers to the orange one's ubiquitous media presence.

Lena Rushing is a staunchly feminist artist, displaying Time's Up, Intersectional Feminism, Elect Women Now, and Mayday—the latter of which makes reference to Margaret Atwood's famed 1985 novel The Handmaid's Tale, about a dystopian theocracy where fertile women are enslaved for breeding.

In keeping with the show's political-protest-sign inspiration, Elect Women Now, which features a woman's face surrounded by the words "Choice, BLM, Equality, ERA," "is functional and should be used until no longer needed," Rushing wrote on the display placard. "Attached with Velcro so you can remove it for marches and rallies." 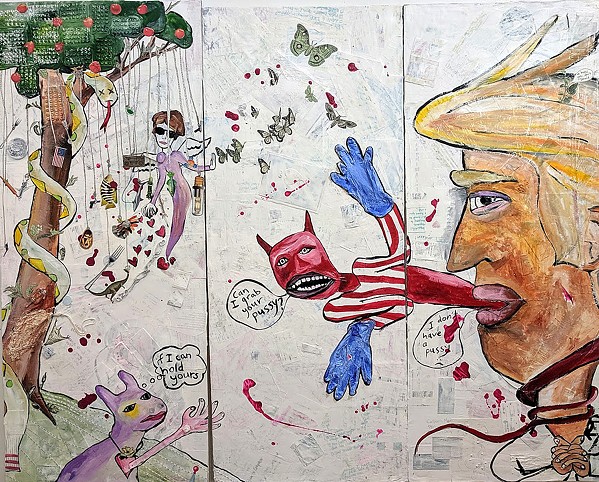 Colleen Marlow has a mask called Fear from her The Masks I Wear series as well as a mixed-media assemblage that comments on environmentalism called The Last of the Polar-corns, which features a polar bear with a unicorn horn. Her triptych painting, Trump's not the first nor the last, references his infamous "grab 'em by the pussy" statement in a folk-art style. 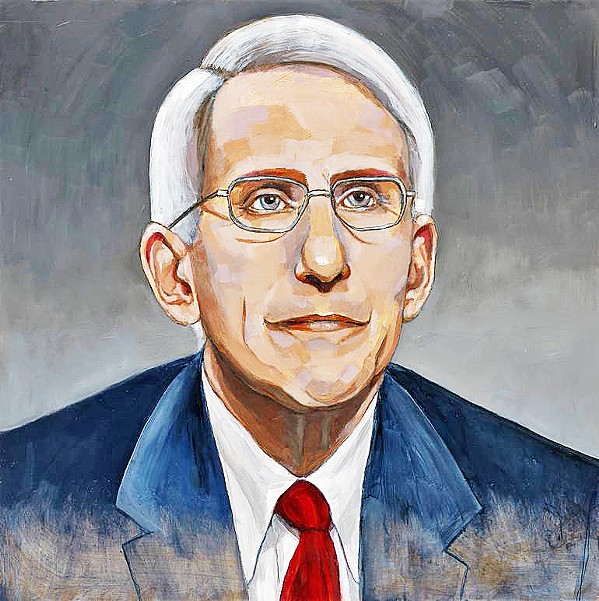 Elizabeth Chaney has a portrait of Anthony Fauci, the immunologist working on Trump's response to the coronavirus, who is often at odds with the president. Called Truth in Transparency, it refers to Trump's lies about the pandemic. She also has a portrait called Justice, of Ruth Bader Ginsburg, and a colorful pop art piece called The State of Our Union.

This is a show worth seeing; it hangs through Sunday, Nov. 8.

"We were planning on a huge reception during Art After Dark, and then the pandemic hit," Orme explained. "We weren't sure if we were going to be able to have a show and put it on hold until just about a month ago. Needless to say, no reception, but the café is open and the art is up!" Δ