Lion King: Love it or hate it

Jon Favreau (Elf, Iron Man, Cowboys & Aliens, Chef, The Jungle Book (2016)) helms this photorealistic-animated remake of Disney's 1994 animated classic of the same name about lion prince Simba (voiced by JD McCrary as a cub and Donald Glover as an adult), who's driven from his kingdom as a cub after his king father, Mufasa (voiced by James Earl Jones), is murdered by his jealous brother, Scar (voiced by Chiwetel Ejiofor). Can young Simba learn the true meaning of responsibility, bravery, and leadership? Can he reclaim his rightful place as king? (118 min.) 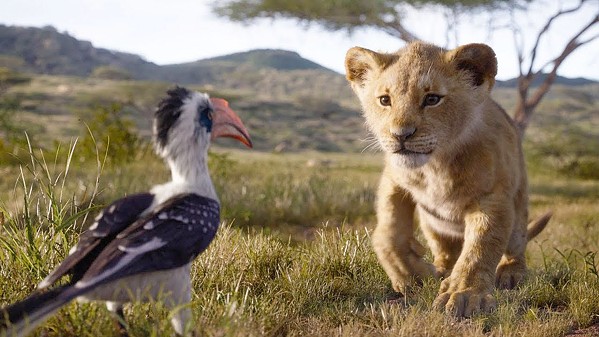 Caleb I can't quite put my finger on what got lost in translation, but somehow this highly anticipated remake of The Lion King—almost a shot-for-shot remake I might add—just didn't do it for me. It's both a faithful adaptation of the original and a visually astounding spectacle in its own right—so what else could I have possibly asked for? Maybe my hopes were just too high. I went in ready to love it but left the theater feeling meh. Most of the original's charm didn't carry over for me. The film opens strong with baby Simba's majestic unveiling to the animal kingdom, set to "Circle of Life" of course, followed by an intricately designed sequence of a mouse scurrying through its surroundings, before being plucked by Scar. "Life's not fair is it, my little friend?" asks everyone's favorite fratricidal feline. Ejiofor (12 Years a Slave, Children of Men) was an inspired choice for Scar, whose original characterization is one of the greatest antagonists in Disney's pantheon. The weight and brutality he brings to the role make it all the more disappointing that the villain's murderous anthem, "Be Prepared," gets butchered down to a mere 20 seconds of talk-singing (one of the few instances the film departs from the original).

Karen OK, can I just put out there that many of the live-action remakes of Disney films have been horrible. I mean the remake of Beauty and the Beast has Emma Watson's horrible, autotune-sounding singing; Dumbo had the horrible acting and the unnecessary added storylines; and I could nitpick Cinderella or Alice in Wonderland to the bone. While some of these films should not have been remade, I think something we forget is these films aren't made for those of us who have seen and love the originals. These are made to excite the next generation of kids. With that being said, I really enjoyed this remake of The Lion King. I like that director Favreau did a great job of not trying to reinvent the wheel with the plot, songs, or characters. The actors perfectly fit their roles except for Beyoncé Knowles-Carter, who lent her voice to adult Nala, and Glover, who voiced adult Simba. I felt like they were both holding back a lot of emotion in their scenes, which is pretty vital to this emotionally heavy film. So the heavy stuff (just a warning: some spoilers ahead if you haven't seen the original), Simba is born to be the next ruler of the wildlife kingdom with the purpose of keeping the peace within the circle of life. His greedy uncle, Scar, wants the kingdom for himself and plots to eliminate Mufasa (current ruler) and Simba by any means necessary. Let me tell you, watching Mufasa get betrayed by Scar and trampled to death in a cartoon was tough, but watching the live-action version was brutal! Scar convinces Simba that his father's death weighed on his shoulders and advised him to scram and save himself from scrutiny. With the bloodline out of the way, Scar takes over the kingdom with the help of his band of hyenas. Simba then travels to the desert only to bump into the lovable Timon (Billy Eichner) and Pumbaa (Seth Rogen). I couldn't stop laughing whenever the duo was on the screen, and I think they're my favorite part of the film. 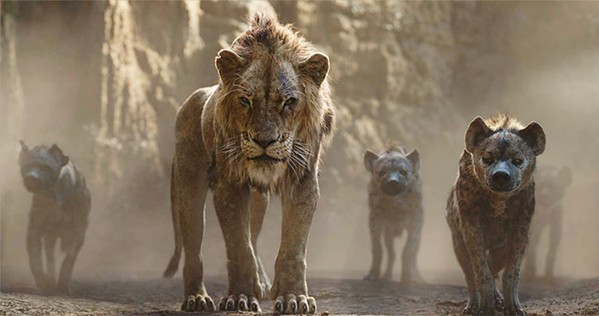 Caleb I'll give you that. It's true that Disney's track record with remakes hasn't been stellar so far. But I actually enjoyed Beauty and the Beast (how dare you dis Watson, Karen), Aladdin, and Favreau's very own Jungle Book far more than this go-round. The Lion King is leaps and bounds ahead of the studio's other attempts though. And you're right about Favreau's direction, too. He doesn't reinvent the wheel—in fact, he's not even on par with the wheel. Burn! I love that director to death (Elf and Iron Man, nuff said), but I didn't feel his creative presence nearly enough here (not a single narwhal in sight). Don't get me wrong though, it's far from terrible. Like a loving sitcom parent, I'm not angry with The Lion King, I'm just disappointed. Remember the moment right before Mufasa has a stern talk with young Simba (after he and Nala are rescued from the hyenas)? Simba walks over to Mufasa but pauses when one of his front paws sinks into his father's footprint. In that instance, the lion prince realizes he's got some pretty big shoes to fill someday. For me, the original Lion King is that footprint. But unlike Simba, who grows big enough to fill that print halfway through the film, this remake is confined to cubhood.

Karen Wow, that's a lot to unpack there. I mean, hakuna matata, Caleb. What a wonderful phrase, right? I get it, though. The 1994 Lion King was the highest grossing traditionally animated film of its time, so doing this remake was a gamble. But while the live-action version will never be the same as its animated predecessor, I'm OK with that. The Lion King doesn't need to be changed in any way, as the story holds its own 25 years later. I'll go back to my only issue, which is the lack of emotion from some characters that might not have come off on screen because of their lame acting (it was like they were barely talking to each other instead of connecting. I'm pretty disappointed with the Queen Bee and her pretentious voice-over, just saying). Maybe the cartoonish design of the original really pushed the dialogue to be better. But, hey, I'll just hold on to my problem-free philosophy for the rest of my days on this review. Δ