Let’s have a contest. Which performer had to overcome the longest shadow? Was it a) Julian Lennon, son of John; b) Chad McQueen, son of Steve; c) Colin Hanks, son of Tom; or d) Lisa Marie Presley, daughter of Elvis?

If you guessed “d,” then you and I agree. I can’t imagine a bigger shadow to crawl out from under than that of The King. I mean, think about it, she even married The Prince of Pop, Michael Jackson. If that’s not a cry for attention, I don’t know what is. But let’s get something straight. In some ways, Lisa Marie is a more creative artist than her father.

Sure, Elvis shared songwriter credit on a few songs, such as “All Shook Up” and “Don’t Be Cruel,” but most music historians believe he had nothing to do with their writing, despite his credits. On the other hand, when Lisa Maria decided to venture into the music business in 2003, her debut album To Whom It May Concern was largely her creative effort. She co-wrote all the music and wrote all the lyrics except for the song “The Road Between,” which was co-written by Gus Black. The album hit No. 5 on the Billboard 200 Album chart and was certified gold. The album’s first single, “Lights Out,” reached No. 18 on Billboard’s Hot Adult Top 40.

Stop for a second and imagine the guts it took to step into the spotlight. Lisa Marie was Elvis’s only child, born exactly nine months after Elvis and Priscilla’s wedding. When her parents separated in 1972, she was 4 years old and shared her time living with her dad in Graceland and her mom in Beverly Hills. She was just 9 years old when her dad died in 1977, and her entire life was a constant reminder of his greatness. In 1993, on her 25th birthday, she inherited his estate, including Graceland. She never had to work, never had to worry about money, and basically was arm candy to a series of “stars,” first musician Danny Keough, whom she married in 1988, then Michael Jackson (’94-’96), then Nicolas Cage (’02-’04). Frankly, I can’t imagine why she risked a music career. She could have been a laughingstock.

Instead, she became a star.

Longtime L.A. Times music critic Robert Hilburn said of her debut: “The music on her new album has a stark, uncompromising tone” and “Presley’s gutsy, blues-edged voice has a distinctive flair.” This is from a guy who wasn’t afraid to eviscerate.

Lisa Marie’s follow-up, 2005’s Now What, hit No. 9 on the Billboard 200 Albums chart and contained the song “Idiot,” a jab at the various men in her life. She was starting to come into her own.

She waited until last year to release her third record, Storm & Grace. “It’s much more a rootsy record, organic record, than my previous work,” she said of the T-Bone Burnett-produced collection. True enough, her first two records seemed to be aimed at making Lisa Marie a pop star, but on Storm & Grace, she comes across as an artist. It’s a moody, haunting album reflecting her turbulent life and maybe hinting at her current grounding as a mature woman. She’s been married to music producer Michael Lockwood since 2006, and they have twin girls together, which makes four kids including the son and daughter Lisa Marie had with Keough. She doesn’t need the spotlight anymore; now she needs a creative outlet. Best of all, her music’s good!

Lisa Marie has also been very active in a number of causes, including opposing the over-prescription of ADHD medications in children, AIDS research, literacy, the Elvis Presley Charitable Foundation, raising funds after Hurricane Katrina, and more. OK, before I gush too much, she’s also a Scientologist, which I find nutzo, but there have been rumors but no public announcements of her leaving the “church.”

As her press materials note, “With all the hoopla that has surrounded her, it’s easy to forget that Lisa Marie Presley is at heart a simple Southern girl whose earliest musical memories are of obsessively listening to 45s in her bedroom at Graceland and of her dad catching her singing into a hairbrush in front of a mirror at the age of 3.”

Burning James and the Funky Flames are teaming up again with Bon Temps Creole Cafe to create a New Orleans-style themed party in the Halloween spirit at the SLO Vets Hall on Friday, Nov. 1, to benefit the Noor Foundation.

“It will mos’ def be a spooky, creepy, funky good time,” said James. “Visit the Marie LeVeau VooDoo Lounge and get your fortune read. You will be dying to get out! The Art Department (Sullivan Studios) is in full production with larger-than-life-size voodoo dolls, skeletons, voodoo shrines, and all variety of apparitions.”

The SLO Strummers Ukulele Society of the Central Coast will play a Brown Bag Concert on Friday, Nov. 1, at noon in SLO’s First Presbyterian Church Community Room. Doors open at 11:45, the show is free, and you’re encouraged to bring your lunch and enjoy! 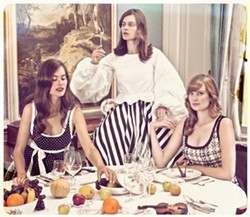 Witness the genius and glory of The Four Freshmen and their amazing harmony vocals at two shows: Friday and Saturday, Nov. 1 and 2, at 8 p.m. at the Cuesta Performing Arts Center. With 70 top-selling singles, six Grammy nominations, and induction in the Vocal Group Hall of fame in 2001 (along with ABBA, Bee Gees, Beach Boys), this is a must-see for lovers of harmony vocals. Visit cpactickets.cuesta.edu.

The Red Barn plays host to Mamajowali in concert plus an All Soul’s Day Halloween Party and Costume Contest hosted by Joe Craven on Saturday, Nov. 2, starting with a potluck at 5 p.m. ($15 suggested donation at the door; BYOB!). Mamajowali is Joe Craven, Mamadou Sidibe, and Walter Strauss, a new “Afromericana” act! 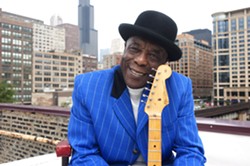 Hailing from Holland, Snowapple is a trio of lovely lasses—Fanny de Ruiter, Laurien Schreuder, and Una Bergin—who combine three-part harmonies and multi-instrumental backups. Schreuder is an opera singer who also performed with a gypsy punk band. De Ruiter is a classically trained vocalist and composer. Bergin is a jazz singer with worldly influences. See them during three shows: Sunday, Nov. 3, at 1 p.m. at Sculpterra; Monday, Nov. 4, at 6:30 p.m. in Bon Temps; and Wednesday, Nov. 6, at 8 p.m. in Linnaea’s Café. All the shows are all-ages and free.

On Wednesday, Nov. 6, check out living legend and blues master Buddy Guy when he plays a 7:30 p.m. show in the Performing Arts Center’s Cohan Center. Guy’s been at it nearly 50 years and has recorded more than 50 albums. Celebrated 14-year-old guitar prodigy and Buddy Guy protégé Quinn Sullivan will open. Tickets range from $44 to $68 (call 756-4849 or order online at calpolyarts.org).

Learn from the masters!

We’ve got some serious talent on the Central Coast, and thankfully they’re happy to share the wealth.

If you play violin, there’s no better person to learn from than Brynn Albanese of Café Musique, who’s holding her Gypsy Swing Violin Technique boot camp the first weekend in November, which sadly is already full, which is why I’m telling you about her next one, set for Saturday, Jan. 4, which will focus on orchestral excerpts and sight reading for intermediate to advanced students. She says she may do some beginners’ clinics in the future. The cost for the November camp was $100, and depending on the number of students—she wants no more than 12—it should be the same for the Jan. 4 clinic. E-mail her at Brynn68@gmail.com.

“I’m starting to do some songwriter workshops at my home in Cambria,” said Johnstone, who’s a terrific performer as well. “I’ll have some notable performers and songwriting partners [during the workshops], a different one every two months.” The first runs Friday, Nov. 15 through Sunday, Nov. 17.

Space is limited to 15 participants, and the price is $800, which includes all meals on Friday, Saturday, and Sunday breakfast. She suggests staying at The Creekside Inn, which is across the street from her house (mention you’re with the workshop and get a discount). Visit judejohnstone.wix.com/workshops for details and to signup.

This is a great opportunity to really immerse yourself in your craft and learn from one of the best in the business.