"There's something in the water around there," Bill Payne said of the Central Coast during a recent phone interview. "That's all I can tell you. You know [Grateful Dead lyricist] Robert Hunter was born in San Luis Obispo, right?"

I did not know that, and I also didn't know that Payne graduated from Santa Maria's Righetti High in 1967 before he founded the world famous jam rock act Little Feat, with Lowell George, in LA in 1969. 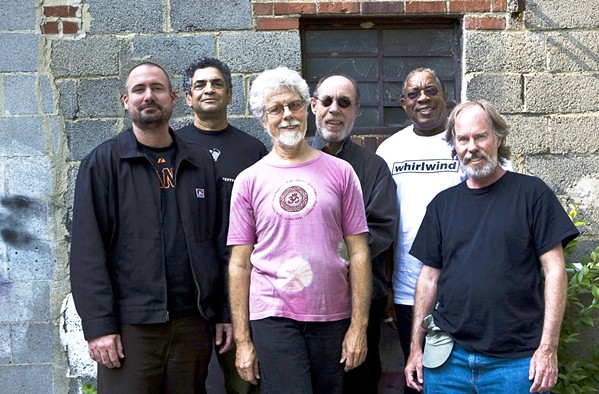 Little Feat has so many classic songs, from "Fat Man in The Bath Tub" and "Dixie Chicken" to "Spanish Moon" and "Oh Atlanta," not to mention "Don't Bogart That Joint," "Time Loves a Hero," "Feats Don't Fail Me Now," and dozens more.

Payne, 70, is the only original member of the 50-year-old band, but most of the band members have been with Payne for decades. Paul Barrere, Sam Clayton, and Kenny Gradney joined in 1971. Fred Tackett came on board in 1988. "Newcomer" Gabe Ford joined Little Feat in 2006 as original drummer Richard Hayword's drum tech and took over as drummer in 2010 after Hayward's death.

Payne's as busy as ever these days. He's an amazing photographer and writer. Check out his website to see for yourself (billpaynecreative.com). He's written a slew of new songs with Hunter. He stays young with a wife 26 years his junior. In addition to Little Feat, he plays with the Doobie Brothers and will go on tour next summer with Santana. In between, he enjoys the ranch life.

"I live out in the middle of nowhere in Montana," Payne said. "It's beautiful up here, and I've had the ranch for 37 or 38 years, but I've only lived full time out here for about 10 years. I used to live in your neck of the woods. I played the Rose Garden [Ballroom] in Pismo Beach."

Had Little Feat been writing any new music?

"Not technically. I've written 20 songs with Robert Hunter, four of which were on [Little Feat's] Rooster Rag [2012] album, which leaves another 16 that I haven't recorded. I've got a bunch more I've written with other people too, so I'm active with what I'm doing, which is also playing with the Doobie Brothers. It'd be nice if we could get in and record one more record with Little Feat, but I'm not sure if that's going to take place or not."

Little Feat and the Doobie Brothers are both iconic American rock bands. Does he have a preference?

"It's all good. It's different enough. Little Feat has more of a jam nature, and I get to sing with Little Feat—they're my songs, as well as other people's—and we're starting to incorporate more of my tunes. I write complicated stuff, and we're working more of that into our shows, but I love playing with the Doobie Bothers. I've known those fellows for, God, almost as long as I've had Little Feat. It's a family, too."

Elton John, who's no slouch in the piano-playing department, called Payne the best rock and blues pianist alive. Can his Little Feat bandmates keep up with his "complicated" compositions?

"They can keep up, but it's challenging, but that's what Little Feat has always been. I don't do it on purpose; I'm just trying to write things that accomplish what I want to do, which is part of the fun with writing with Robert Hunter, I might add. I wasn't sure how that was going to go, and I'm sure he was in the same boat, but it turned out that we had some tall ideas on both sides. Once I said, 'You know the music's in the lyrics,' and he said, 'Yeah, but it takes a composer to draw them out.' I thought that was pretty nice of him to say."

At this point, you'd be forgiven if you started feeling like a slacker in Payne's presence. He seems to excel at everything. I asked him to tell me something he's bad at so I could feel better about myself.

"My first couple of marriages," he laughed, "but let's stop there."

Next Sunday, May 26, Little Feat will headline the 26th annual Avila Beach Blues Festival on his band's 50th anniversary tour. The show will also feature Eric Burdon and the Animals and harp master Charlie Musselwhite (gates at noon; show at 2 p.m.; all ages; $55 to $110 at Boo Boo's and eventbrite.com).

You can expect a show that gives the fans what they want.

"We have some newer songs," Payne said, "but we mostly play a lot of the classics. It's a rich catalog of music, so we try to put in a lot of different things depending on how much time we have, what guitar changes Paul [Barrere] wants to make, and I'll make some suggestions as we go along. It's a little different at each gig but not wholesale different. We want to make the fans happy, but it's for us too. It's a two-way street. We like playing them, and we play them a little different sometimes.

"I didn't think Little Feat would still be around 50 years after Lowell [George] and I started this band," he continued. "We thought the music would, but it's pretty interesting and humbling to say the least, not only to have the band still be around but to have groups like Phish and others cover our material.

"I'm looking forward on a personal level to coming back there and playing again," Payne said. "I used to surf at Avila Beach when I was a kid. I played Paso about a year and a half ago with the Doobie Brothers, and oh how it's changed. I didn't even recognize it! But I really like that part of California. It's beautiful."

And there's something in our water. Drink up, Bill!

First, don't forget that Numbskull and Good Medicine Presents are bringing San Fernando Valley rock band She Wants Revenge to The Siren on Thursday, May 16 (7 p.m.; 21-and-older; $23 presale at Boo Boo's and ticketfly.com or $25 at the door).

Their big show this week is blues masters Tommy Castro and the Painkillers at The Siren on Friday, May 17 (7:30 p.m.; 21-and-older; $25.50 at Boo Boo's and ticketfly.com or $30 at the door), with The Nick Moss Band opening. Castro will deliver blistering, high-energy blues!

Numbskull and Good Medicine are also bringing Koe Wetzel to Barrelhouse Brewing on Saturday, May 18 (5:30 p.m.; all ages; $16 presale at Boo Boo's and ticketfly.com or $20 at the door). Born and raised in East Texas, Wetzel mixes "Southern rock energy and East Texas charm," according to his bio.

Yoke Lore plays the SLO Brew Rock Event Center on Wednesday, May 22 (7 p.m.; 18-and-older; $12 at ticketweb.com; standing room only), with Adam Melchor opening. Lore is touring in support of Absolutes, his new EP that "explores the gray areas between black and white ideas while building upon the lush, sonic palette of his past works," according to press materials

Master percussionist and avant-garde sound artist Tatsuya Nakatani plays a solo set at A Satellite of Love this Thursday, May 16 (8 p.m.; $10 donation; all ages). Expect an experience that's "visceral, non-linear, and intuitively primitive, expressing an unusually strong spirit while resisting genre," according to press materials.

The Journals, father-and-son team John and Dylan Krause, play a CD release party at Southern Station on Saturday, May 18 (5 to 8 p.m.; all ages; free), for Home Feeling ($10), featuring 15 heartfelt original songs. "Much to my surprise, when my son Dylan became 15, he got bit by that ol' music/songwriter bug, just like his dad," John said. "Now that he's getting close to 17, we're launching our act."

The 2002 Australian Fingerstyle Guitar Champion, Adam Miller, plays the Morro Bay Wine Seller on Saturday, May 18, as part of the Songwriters at Play showcase (6:30 p.m.; $11.49 at my805tix.com). Now based in LA, Miller said, "My music ranges from jazz and blues through to pop and soul—very approachable and groove focused."

Trumpet star Brandon Ridenour plays Cal Poly's Performing Arts Center on Sunday, May 19, in a program of classical music accompanied by guest organist Katya Gotsdiner-McMahan, on the Forbes organ, and pianist Peter Dugan (3 p.m.; all ages; $28.80 student and $36 general at calpolyarts.org or (805) 756-4849).

The SLO Chamber Orchestra presents its season finale concert on Sunday, May 19, in Trinity United Methodist Church of Los Osos (3 p.m.; all ages; $10 donation requested). Music Director and Conductor Keith Waibel helms this program of classical music including Vivaldi's Concerto for Three Violins and Continuo in F Major, with violinists Bette Byers, Christopher Reutinger, and Sal Garza! Ought to be amazing!

British Columbia's husky-voiced bluesman Harpdog Brown and The Uptown Blues Band play Morro Bay's The Siren on Sunday, May 19, as part of their "For Love and Money Tour" (7 p.m.; 21-and-older; $10 at Boo Boo's and ticketfly.com). Expect vintage-sounding Chicago and New Orleans style blues.

Spin me right round!

"We will again be extending our event to an outdoor grove behind the main hall for people to convene and hang out, featuring a family-friendly beer garden, with guest DJs spinning vinyl records all afternoon long. There will also be food trucks serving up the goods to keep you nourished as you dig through the crates," organizer Manuel Barba said. Δ