As her guests settled into chairs gathered under a shady spot on the porch, Joanne Ruggles set four glasses of ice and a glistening pitcher of fresh-squeezed lemonade at the center of the table. It was a sweltering, record-breaking-heat kind of August afternoon, and according to Joanne, if it's not made with real lemons and it isn't ice cold, it's not lemonade worth drinking. She disappeared into her house again briefly, and then returned with a plate of homemade persimmon cookies to share.

"They were Phil's favorite," she said. 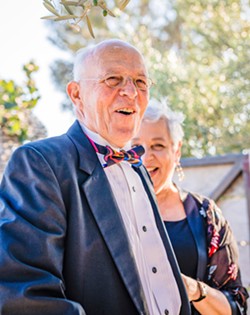 Phil Ruggles, Joanne's late husband and a once beloved Cal Poly professor, was the reason Joanne and her newfound friends gathered that day. They're working to get the word out about the risks associated with a family of blood thinners they believe could have contributed to Phil's death.

In the fall of 2019, Phil died suddenly after suffering an aortic dissection, a rare and often deadly event in which the innermost layer of the aorta tears, allowing blood to surge through the wound and causing the inner and middle layers of the aorta to separate.

Treatment typically requires emergency surgery, and Phil sought help at French Hospital Medical Center. There, Joanne said she was told that Phil couldn't go into surgery immediately because he was on Eliquis, a new-era direct oral anticoagulant used to prevent blood clots. While there is an antidote, Andexxa, which almost instantly reverses the effects of Eliquis, Joanne said she was told that French Hospital doesn't keep it on-site.

Phil died while en route to another hospital in Los Angeles.

Shortly after Phil's death, Joanne and her daughter, Lauren Donovan, dedicated themselves to getting Andexxa into local hospitals and to preventing any possibility of what happened to Phil from happening again.

They read up on the issue and found that Phil's situation wasn't all that unique. Eliquis and other blood thinners like it—factor Xa inhibitors—hit the market in the early 2010s and offer what's largely considered a more effective and convenient alternative to warfarin, a decades-old anticoagulant that often causes serious side effects and requires close monitoring.

Factor Xa inhibitors come with a caveat: While the effects of warfarin can be easily reversed with a shot of vitamin K in the event of major bleeding, factor Xa reversal is more complex. Andexxa, andexanet alfa, is the only antidote approved to reverse bleeding in people taking Eliquis. While Andexxa is widely available in densely populated areas of the U.S., its price tag and concerns about its efficacy have kept it off hospitals' shelves in regions like the Central Coast.

Joanne's push to bring Andexxa to the region found allies in locals Susan Robinson and Sally Kruger. Robinson, a retired OB-GYN, and Kruger, a retired medical researcher, heard Phil's story and found it troubling—medically and personally. Both have husbands who use blood thinners and were, until recently, prescribed Eliquis and a similar anticoagulant called Xarelto.

Robinson and Kruger collectively read dozens of studies and articles on Andexxa. All seemed to show, they said, that while there is disagreement in the medical community regarding the necessity of and risks associated with Andexxa, it's the only FDA-approved reversal agent for Eliquis and Xarelto and an option that should at least be available.

They discussed the issue with those working in quality improvement at both French Hospital and Sierra Vista Regional Medical Center, spoke to their own doctors and their husbands' doctors, and reached out to the California Department of Public Health Licensing and Certification.

Oct. 19 marked the first anniversary of Phil's death, and little, if anything, has changed. Andexxa is still not on the formulary at either Tenet Health Central Coast or local Dignity Health hospitals, and it's become clear that Andexxa was likely just one of many reasons for Phil's transfer to Los Angeles, including the need for more experienced surgeons and a larger blood bank.

In statements to New Times, both Dignity and Tenet said they carry Kcentra, a prothrombin complex concentrate, which is routinely used to reverse the effects of factor Xa inhibitors.

"Our skilled team of physicians and pharmacists have reviewed the current literature regarding the use of Andexxa in similar situations," Dignity Health representatives wrote in a statement. "Currently, there is insufficient evidence to recommend Andexxa over Kcentra in life-threatening bleeding in patients on a [direct oral anticoagulant] medication. This conclusion is based on a number of patient-centered outcomes such as effectiveness in stopping bleeding, risk of blood clot formation, mortality, functional outcomes, and cost."

"With the existence of other equivalent and safer treatments, the decision has been not to carry Andexxa at our facilities," Lisa wrote. "The primary agent relied upon for reversal of oral anticoagulants at both hospitals is Kcentra."

Joanne, Robinson, and Kruger respectfully disagree with those conclusions.

The group gathered on Joanne's patio that hot Aug. 17 afternoon—sipping Joanne's lemonade and nibbling on Phil's favorite cookies—to rethink their strategy. What's most striking to all three women is the lack of information available to the general public regarding the true risks associated with Eliquis and Xarelto.

How is it that Phil—a man who was notoriously persnickety about his health and medication—and the husbands of two women with medical backgrounds weren't aware of the nuances surrounding these new-era blood thinners and their antidotes?

Robinson said her husband was on warfarin for years, and when he switched over to Xarelto, he asked his doctor if there was a reversal agent in case of a bleeding event. The doctor, Robinson said, confirmed that there is an antidote.

"And [my husband] said it never occurred to him to call the hospital and say, 'Do you carry the reversal agent?'" Robinson said with a laugh. "You know, like, exactly how deeply are you supposed to go into this?"

Both Kruger and Robinson had their husbands switch from factor Xa inhibitors to a direct thrombin inhibitor, Pradaxa, which they said appears to work as well as Eliquis and Xarelto, and has an FDA-approved antidote that French Hospital carries.

"So here are all these people on Xa inhibitors when we don't carry the antidote," Robinson said, "and almost nobody is on the direct thrombin inhibitor, which works just as well, and French hospital has the exact reversal agent for it."

Kruger added that while she respects the medical opinions of the physicians and surgeons at Dignity and Tenet regarding Andexxa, she just didn't feel comfortable with her husband on Eliquis.

She just wants others with similar reservations to know there are other options available.

"I think why we still feel invested in this cause," Joanne added, " ... is to at least inform people in our county of this problem, of this difficulty of a huge amount of prescriptions for Eliquis, but a disinterest in providing what at least half the medical field or world seems to think is the appropriate antidote." Δ