Little moth is no big thing 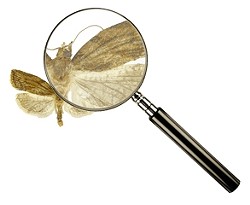 On August 25, the California Senate Food and Agriculture Committee, chaired by Senate Majority Leader Dean Florez, held a hearing regarding the Light Brown Apple Moth, more commonly known as LBAM. A panel of eminent scientists and consumer advocacy groups provided testimony that encapsulated many of the concerns experts and citizens have regarding attempts by the California Department of Food and Agriculture (CDFA) to eradicate LBAM from California. The eradication program began with aerial spraying of pesticides over Monterey and Santa Cruz counties, scheduled sprays over several other counties, the application of a variety of pesticide products in private and community properties, and the proposed release of millions of “sterile” insects.

When the emergency eradication program began in 2007, it was met with staunch opposition from citizens within the spray zones. This led to a lawsuit and the Monterey Superior Court ruling that no such evidence of an emergency was provided by CDFA. The ruling also required CDFA to conduct an Environmental Impact Review (EIR), which was released early last month. The Senate hearing was in response to the EIR.

The panel opened with a review of the hundreds of adverse events reported by Monterey and Santa Cruz County residents after being sprayed with two different pheromone pesticides. One speaker, who along with his wife was among those sickened, gave personal testimony. Both thought they would have to leave California if the pesticide spraying was to continue. At least 450 other human adverse effects were reported. The overwhelming majority of these reports went uninvestigated, including the near death of an 11-month old Monterey child who suffered acute reactive airway disease immediately following the spray. In addition to the human effects, reports
of dead wildlife, including hundreds of seabirds, land birds, bees, dogs, cats, rabbits, and goats
were recounted.

Two senior entomologists testified: Dr. James Carey, a professor of entomology from UC Davis and Dr. Derrell Chambers, a 44-year veteran of the U.S. Department of Agriculture (USDA) who is an expert in eradication programs. Both testified that LBAM is so widespread in California that it is virtually impossible to eradicate and that the tools being used by CDFA, according to Dr. Chambers, “have virtually no chance of succeeding.” UC Santa Cruz professor, Dr. Daniel Harder, testified he traveled to New Zealand where LBAM is endemic to study LBAM and how it is managed. After meeting with experts in agriculture and horticulture, as well as regulatory agencies, Dr. Harder concluded that LBAM is nothing more than a background food-chain insect that presents little threat to crops and is easily and cost-effectively managed in agricultural settings. Dr. Harder, a co-author of a formal petition calling for the reclassification of LBAM, asserts that 70 years of agriculture literature supports LBAM’s status as a very minor insect.

A Sonoma County resident, Yannick Phillips, became worried about the potential effects of LBAM on grapes, especially in that area so dense with viticulture. Ms. Phillips contacted numerous wineries, grape growers, entomologists, and agricultural associations in Australia, New Zealand, and Hawaii, where LBAM has been observed for more than 100 years. According to her testimony, the response was unanimously in support of Dr. Harder’s findings; LBAM is a minor insect of very little concern regarding any crop and is easily managed. She declared, “As long as I am a resident of Sonoma, I will not allow CDFA to come in and expose our communities to pesticides that are not needed.”

All of this leads to two questions; why is USDA now spending $3 million on a “Hungry Pest” ad campaign to convince California residents to  buy and use more pesticides to kill all the moths that are flitting around our porch lights? And why should a program be perpetuated that is neither needed nor has a chance of succeeding? CDFA Secretary AG Kawamura has publicly stated that LBAM will destroy California’s precious redwoods, oaks, cypresses, and “our way of life.” The opposition counters there is no precedent for such a scenario due to LBAM anywhere in the world and it is best managed in agriculture settings, not in our communities.

Formal transcripts of this hearing will be available on the California Senate Food and Agriculture  Committee website soon (californiasafefood.com).

Roy Upton represents Citizens For Health, a national citizens’ advocacy group focusing on issues of personal choices in health care and environmental health. He is a resident of Soquel, in Santa Cruz County. Contact him via the editor, econnolly@newtimesslo.com.