Although much of the cast for the San Luis Obispo Little Theatre’s current show, Little Women of Orchard House, is small in stature, they make up for it in acting chops. 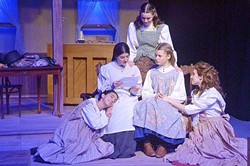 Based on the beloved young adult novel of the same name by Louisa May Alcott, Little Women is presented by the child actors of the theatre’s Academy of Creative Theatre and is directed by Shelagh Garren.

Alcott’s novel is loosely based on her own childhood with her sisters Anna, Elizabeth, and Abigail. The Alcott girls had an unusual upbringing for young women during the Civil War era. Raised by transcendentalist parents, each was allowed to pursue her passions and grew up around great intellectuals of the day such as Ralph Waldo Emerson and Henry David Thoreau.

Alcott became the protagonist of her story, the tomboy playwright Jo (Elizabeth Tharp), while each of her sisters became the basis for the other March sisters, Meg (Samantha Mucciacito) the teacher, Beth (Abigail Dorman) the musician, and Amy (Linnae Marks) the artist. The Little Theatre cleverly paid homage to this with a lovely visual: The show begins with a narrator, Alcott (Sara McGrady), talking about her childhood and her sisters as they play on stage and then literally hand off each of their prized possessions, a painting or a doll, to their doppelganger March sister counterparts before leaving the stage. The play circles back to this same moment at the end as well.

The majority of the play takes place on the simple but homey set of the living room and attic of Orchard House in Concord, Mass., where both the Alcott and March sisters
grew up.

While the March sisters fall on hard times when their father is off at war, they have more freedoms than many other women of their time. Jo works on her play, and Amy gets the chance to go to Europe with a wealthy aunt to study art. Alcott never married or had kids, and this viewpoint is espoused through Jo, who dreams of being a successful writer in New York, not of a husband and children, like her sisters do. Still, the play hints that sometimes women must do the conventional thing and settle down as both of Jo’s surviving sisters end up marrying, one for love and the other for wealth.

The Little Theatre does justice to the classic coming-of-age story of Little Women, a show that is a delight for audiences of all ages.

Though she be little, Arts Editor Ryah Cooley is fierce at rcooley@newtimesslo.com.