Saturday in the park

The Seven Sleeping Dragons meet every Saturday from 1 to 4 p.m. at Santa Rosa Park in SLO. Visit their Facebook page for more information.

It's Saturday afternoon at Santa Rosa Park and the Seven Sleeping Dragons (SSD) don't look asleep to me. A few members of the local Amtgard group are either sleepwalking or fully awake and unpacking padded weapons and armor around 1 p.m.

One of the club's newer members, Josiah York, is already suited up and in the middle of a duel with a peer. The Cuesta College freshman came across SSD shortly after moving to the Central Coast. 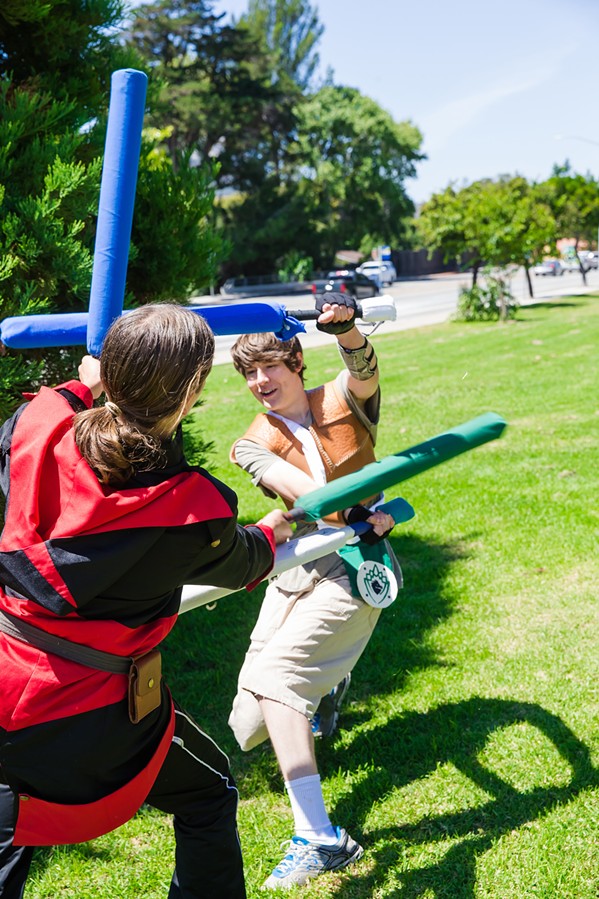 "I had just moved down here from Sonora and was looking for something to keep myself active and make friends. Then I found out about this," York said. "One weekend, I decided to just give it a go. I was so nervous."

For those unfamiliar, Amtgard is a live action role-playing (LARP) game that features boffer (foam weapon) combat. York had zero Amtgard experience before attending his first SSD meeting but felt welcomed right away. As an incoming freshman to a school more than 200 miles away from his hometown, York has found the group to be a fun way to meet new people.

"Amtgard is really about letting your playful side out and just having fun," York said. "It's a great way to make friends, get rid of stress, or just mess around. And everyone is extremely welcoming."

York recommends that anyone even remotely curious about LARPing should at least attend one SSD meeting for the heck of it.

"Worst case, you end up wasting an hour or so on a Saturday," York said. "Best case, you discover a new hobby that you tremendously enjoy!"

A single LARP adventure was all it took for both York and longtime SSD member and Cal Poly alumni Megan Fay to get hooked on Amtgard. Fay, known as Regent Lady Squire Faye McKenzie in-game, was introduced to Amtgard in 2002 while living in Santa Barbara.

"I was not familiar with Amtgard at all before that," Fay said. "I was vaguely aware that there were groups that did medieval re-enactment and similar things."

The concept of Amtgard first caught Fay's attention when one of her friends described it to her as a live action version of Dungeons and Dragons, which she was familiar with.

"I had played tabletop role-playing games, so I had the starting blocks before I joined," Fay said. "My friend called me up to invite me, and I said yes. We went out and the group handed us some spares [weapons and armor], gave us the rules, and threw us into battle."

That was only the first of many Amtgard adventures for Fay. Shortly after moving to SLO in 2004 to study animal science at Cal Poly, she joined SSD. Almost 15 years later, some of the club's other longtime members have her beat in terms of seniority.

"Some have been playing for up to 20 years," Fay said.

Many of the longest running members of SSD were recruited at various PolyCon events throughout the decades, Fay added. PolyCon, founded in 1983, is an annual gaming convention presented by students and alumni of Cal Poly.

"We don't participate every year [in PolyCon]," Fay said. "But we've done many demonstrations there in the past."

But whether it's during a convention demo or regular weekly meeting, SSD embraces the behind-the-scenes nature of Amtgard just as much as the actual battles.

"We make all of our own gear. Members can learn how to build weapons and shields, sew garb, and make armor," Fay said. "So even if you don't want to be at the front of the battlefield, you can still participate."

"There's a place for everyone here," York said in agreement. "You can build, craft, help come up with games, watch, or come to just talk LARP politics." Δ