Courtesy Photos By Rylo Media Design, Ryan C. Loyd TAMING OF THE CREW Cast members Jeff Salsbury, Suzy Newman, and Billy Breed (pictured, left to right) task themselves to perform as many highlights as they can from all 38 of Shakespeare's plays in a single sitting during San Luis Obispo Repertory Theatre's production of The Complete Works of William Shakespeare [abridged].

The San Luis Repertory Theatre presents its production of The Complete Works of William Shakespeare [abridged] through Aug. 8, with performances every Friday and Saturday at 7 p.m., and every Saturday and Sunday at 2 p.m. Call (805) 786-2440 or visit slorep.org for more info. The venue is located at 888 Morro St., San Luis Obispo.

To see, or not to see, that is the question. In the case of The Complete Works of William Shakespeare [abridged]—San Luis Obispo Repertory Theatre's first live, in-person production in more than a year—the answer is yes!

Cast members Billy Breed, Suzy Newman, and Jeff Salsbury—three very familiar faces to Central Coast theater buffs, each sharing past credits with both PCPA and the Great American Melodrama—task themselves to perform as many highlights as they can from all 38 of Shakespeare's plays in a single sitting, dividing the major and minor roles among themselves, in under three hours.

The end result is chaotically irreverent in all the right ways, paying tribute to Shakespeare's works while checking off too many pop culture references to keep track of—Charlie's Angels, Edward Scissorhands, The Matrix, the list goes on. Even if younger viewers don't get The Love Boat jokes, they'll have the last laugh when older folks start scratching their heads over the Mortal Kombat spoof.

But before the trio's deep dive into Shakespeare's portfolio begins, Salsbury (as himself, or assumedly an exaggerated version of himself, simply referred to as Jeff) kicks off the show by reminding the audience to silence their phones and refrain from recording the production in any shape or form, while ironically posing for a recurring camera flash.

Newman and Breed, also referred to by their first names, soon make their introductions to the audience as well, and once that fourth wall is torn down, it never goes back up.

In fact, some of the best bits in the show involve audience participation. While tackling Shakespeare's Hamlet, the trio enlists one audience member to play Ophelia during the "Nunnery Scene." Breed asks for the lucky participant's name but immediately opts to call them "Bob" instead, as it's much easier to remember.

During this segment, the rest of the audience is broken up into three sections (representing Ophelia's ego, superego, and id, respectively), and each section is instructed to yell out a separate phrase over and over again, up until "Bob" lets out a much needed, therapeutic shriek. In those moments, it's as if the audience is collectively slipping into madness together. It's honestly a fever dream of an experience (of the midsummer night variety, so to speak). 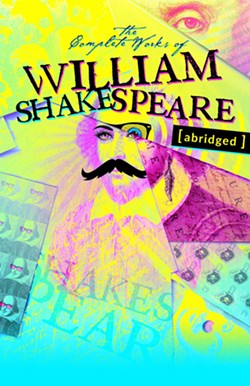 Luckily for attendees, the darkest bit in the show doesn't involve audience participation, as the trio reinterpret Titus Andronicus as a Food Network cooking show, with a Guy Fieri-esque version of Titus (played by Newman) cracking jokes about grinding the bones of his enemies and baking their decapitated heads. This skit gives a whole new meaning to Emeril's "Bam!" catchphrase.

The show's director, Kevin Harris (SLO Rep's managing artistic director since 2008), has lovingly described The Complete Works of William Shakespeare [abridged] as a celebration of not only its titular playwright, but the concept of live theater in itself. In this way, the show was an ideal candidate for the return of live, in-person performances at SLO Rep.

"We couldn't be happier to welcome you back to SLO Rep with this production, with this cast, with this crew, in this special place," Harris said in the show's program. "We missed you so much." Δ

Calendar Editor Caleb Wiseblood is stoked to be seeing live plays again. Contact him at cwiseblood@newtimesslo.com.