One man fights cancer at 200 mph 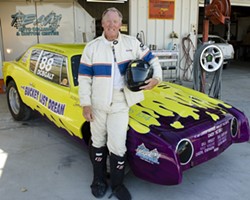 When Dan Sallia was 14 years old, he snuck his mom’s 1960 Studebaker Lark station wagon into a drag race while his brother distracted her. Once she saw Sallia on the track in her car she was “livid,” he said. But after Sallia won in his race class and showed her the check and the trophy, she said, “My car won that?”

Now, Sallia is 58 years old, lives in San Luis Obispo, and has been racing cars since that first victory.

He squints a lot and has the stature of an actor playing a military commander. He has a raspy voice and clears his throat often, occasionally rubbing his fingers over long white scars that streak across his neck.

On Aug. 22, 2005, Sallia was diagnosed with squamous cell carcinoma, a form of throat cancer.

“It’s like living with a hand grenade in your neck,” he said.

Over the past five years, Sallia has had three tumors cut out of his neck. Doctors discovered a new tumor in March—his fourth, about the size of a marble and lodged at the base of his tongue on the right side.

After the diagnosis, when his doctor initially told him he would likely die in five months, Sallia sat alone, facing his own mortality. He called it a “pity party.” But later, partially inspired by his pastor and a country song called “Live Like You Were Dying,” Sallia decided he was going to do the things he’d always wanted to.

In spring of 2006, Sallia made his bucket list. First, he wanted to win the world championship of softball, which he did. Also on Sallia’s list: attend the L.A. Dodgers Fantasy Camp, drive NASCAR at the Richard Petty Driving Experience in Las Vegas, and race a Studebaker at the Bonneville Salt Flats in Utah. He’s currently working on the latter.

After posting his story on online racing forums, Sallia acquired a 1953 Burke Bros. Studebaker that set 15 records at Bonneville and 20 records at El Mirage Dry Lake in the Mojave Desert.

With help from Pat King, owner of High Gear Ranch in Paso Robles, Sallia was able to rebuild the car and qualify to take it up to 150 mph at El Mirage. Next stop is Bonneville, where Sallia hopes to outfit the car with the parts necessary to take it up to 200 mph.

“That’s where we find ourselves now … this close to seeing the dream fulfilled,” Sallia said, pinching his thumb and index finger together.

But Sallia still needs money to get there: about $3,200 to upgrade the car, pay the Bonneville fees, and fund the traveling costs to make the 1,700-mile trip.

If he raises the money and rolls his Studebaker onto the Bonneville flats, Sallia admitted he’ll be facing death—only in a different form from the cancer he’s lived with for five years. He shrugged off the danger, saying the car has been heavily reinforced for safety.

His latest tumor is responding to a regimen of prayer, exercise, and a healthy diet, Sallia said. But it’s almost inoperable, and if it spreads to his lungs, the cancer will be treatable, but incurable. For now, he’s just hoping to scratch one more item off his list.

After that, “I’ve got two more things I gotta check off here,” he laughed.

Non tax-deductible donations to help Sallia get to Bonneville can be made through PayPal using dsallia@yahoo.com; by a check made out to Dan Sallia, 1563 El Tigre Court No. 5, San Luis Obispo, 93405; at Heritage Oaks Bank; or by texting “Bucket” to 90210.

Help support Noel Phillips, a Paso Robles High School softball player diagnosed with acute lymphoblastic leukemia on July 13. A parking lot sale to support the “Noel Phillips Benefit Fund” is scheduled for Sept. 11 from 7:30 a.m. until 3:30 p.m. in the Paso Robles High School parking lot. For more information, contact Sheila Johnson at 238-2383 or info@renditioninterior.com; Linda Keith at lindak@prodocumentsolutions.com; Diana Phillips at 238-6851 or geodiana@prodocumentsolutions.com; or Jeff Phillips at 391-0187 or info@renditioninterior.com. Cash donations can be made at any branch of Heritage Oaks Bank. …

Bambu Batu has moved. The business relocated from 1127 Broad St. in San Luis Obispo to 1023 Broad St. The new location will be larger with more windows and natural light, creekside vistas, and “enhanced Zen access.”