Back in January, California lifted its ban on outdoor live music. It was only for outdoor venues where food is being served, and social distancing and masks were still required, but the good news is we're now in the red tier, which means indoor concerts at 25 percent capacity for venues that serve food. In short, live music is coming back, as evidenced by four shows this Friday and Saturday.

You can kick things off on Friday, March 5, when Brass Mash plays live at Liquid Gravity starting at 6 p.m. (675 Clarion Court, SLO).

"Bring a mask, a friend, and a jacket, and enjoy drinks with your meal!" the band said. "Limited seating, so get there early!" 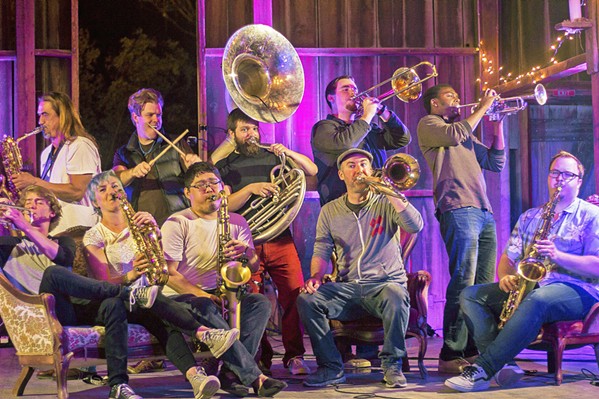 Liquid Gravity's patio is pretty sweet. It's in the same location as Tap-It, so if you'd been there, you know the setup. They bring in outside food venders so you can get your nosh on along with their selection of tasty microbrews.

As for Brass Mash ... fantastic! The horn band mashes up funk and pop tunes into super danceable party tracks. They look like they're having so much fun you'll regret your decision to drop out of band in the third grade. Also on Friday, March 5, out at SLO Brew Rock you can hear reggae acts The Late Ones and Dread Kennedy starting at 6 p.m. The show will also be streamed on Facebook, but there's limited outdoor seating at the brewery.

The Late Ones formed in Laie, Hawaii, but now reside in Gardena. Brothers Tui (lead vocals) and Tau Avei (vocals), along with cousin Josh Brunson (vocals), are the voices that make up the group, which is rooted "in Samoan culture and complemented by the group's African American heritage, the familial bond between the three members [that] transcends throughout the group's conscious lyrics and catchy melodies," according to press materials. "The name 'The Late Ones' pays tributes to all of the late and great revolutionaries who have come and gone such as Bob Marley, Tupac, Jimi Hendrix, Steve Biko, and John Lennon. It's the fusion of each revolutionary story, struggle, and message that inspires and resonates with The Late Ones' own journey and love for all genres of music. Built on this deeply rooted conviction, The Late Ones harness something undeniably special in calling for justice, freedom, and equality with their music."

Also on the bill is Dread Kennedy, a Polynesian of Samoan descent who grew up in Long Beach and Carson. Language, music, and dance have always been three pillars of the multi-instrumentalist's life. In addition to his solo work, he's lead singer of the So-Cal band Ital Vibes. 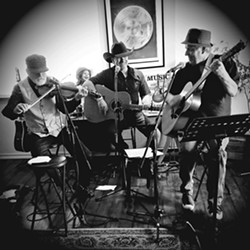 On Saturday, March 6, Steve Key presents a musical afternoon at Sculpterra Winery from 12:30 to 3:30 p.m. Key will be joined by Ken McMeans and John Nowel of the band Stereo Chickens, an Americana group "blending country, bluegrass, folk, and gospel into their own unique sound," according to press materials. "Steve, Ken, and John are all writers, so they'll swap songs in the style of a Nashville in-the-round, as well as jamming on some favorite tunes. Special guest Ynana Rose will swap songs with us too!"

That evening on Saturday, March 6, back at SLO Brew Rock, check out The FrenZ with Kenny Lee Lewis at 6 p.m. This show will also be streamed on Facebook.

Kenny is the longtime bandmate of Steve Miller, playing bass and guitar in the Steve Miller Band and on some of Miller's most legendary recordings. Normally, he'd have spent much of the past year touring, but ... well, you know. The FrenZ is one of Kenny's side projects, made up of "of like-minded San Joaquin Valley-raised musician/singer/songwriters who enjoy coming together and paying homage to the Golden Era of '60s and '70s classic rock, R&B, and mild prog. The FrenZ also offer up original songs and rearrangements of that era."

These guys are terrific! Lifelong players with a ton of rock history among them. If you like classic rock, you're going to dig this band and their dueling guitars and three-part vocal harmonies.

Tip of the hat to South County resident and guitar legend Merrell Fankhauser, whose song "Lila" was included in the film The Trial of the Chicago 7, which was nominated for Best Drama at this year's Golden Globes. The film lost to Nomadland, but it still may be in the running for an Academy Award.

"The producer told me when you get a Golden Globe nomination you are sure to get an Academy Award nomination," Fankhauser wrote in an email. "A possible soundtrack album also if it wins. I just signed a deal for a song to be in a TV series starting end of this year. Several movie and TV music agents have now contacted me about my large catalog of music from the '60s to now. It's helping financially during these COVID times."

Fingers crossed for an Oscar, Merrell!

Hearst Castle and Monday Club architect Julia Morgan is getting the tribute treatment on a new album coming out on March 5, called 13 Women. "Castles," by Bay area native Susan Anders, is inspired by Morgan and her best known work.

"When I was growing up in Berkeley, I kept hearing about the architect Julia Morgan, since her buildings are all over the Bay Area," Anders said. "But I didn't learn her story of diligence, drive, and love of work until my husband, Tom, suggested her for the album. I often noodle on the piano as a way to clear my head and segue from left brain to right, and the piano figure for 'Castles' came from a good noodling session."