I’m reminded of the shower scene in Psycho when the dark blood swirls down the drain as Marion Crane breathes her last. Except it’s not blood; it’s Live Oak dirt, and I'm covered in it. It’s in my lungs, nose, hair, the very pores of my skin, and there it goes down the drain.

This ritual of the first “real” shower after four days in the dirt is one Live Oak fans know well. Even though the campground has brand new shower facilities, as soon as you walk out, you’re back in the dirt and dust of the annual Live Oak Music Festival. Feeling dirty for days is a small price to pay for admission into this community of music fans who every year turn this area off of Highway 154 into a little utopia of good vibes and great music.

The drought made this year’s event even drier and dustier, and some of the stately old oak trees that speckle the 40-acre Live Oak campsite succumbed to the arid conditions and were cut down; others look sickly, like they’re barely hanging on. Even Steve Earle, in his closing concert, mentioned California’s drought and expressed some relief that the golf course near the camp was going brown rather than being watered. 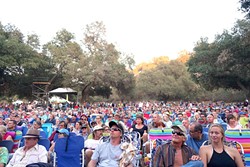 “We were just down playing near Coachella and the golf courses were all green,” he said in disgust. “We had a bad drought in Texas but it seems to be over. Be careful what you wish for,” he added in reference to his home state’s flooding.

Despite the bone-dry conditions, this year’s festival was one to remember, in part because of Earle’s amazing closing concert. True, he and his band seemed a maudlin bunch. I heard he went from his bus straight to the stage without bothering to enjoy the festival’s famous backstage hospitality. I suppose every artist has his or her process to prepare for the gig, and despite the rumblings I heard in regard to his prickly demeanor, his show was incredible.

It didn’t hurt that his band, The Dukes, delivered performances worthy of Earle’s iconic songs like “Guitar Town” and “Copperhead Road.” Bassist Kelly Looney and drummer Will Rigby laid down a watertight rhythm section, while guitarist Chris Masterson threw down spellbinding guitar solos and fiddler and backing vocalist Eleanor Whitmore added lush layers to the band’s sound, leaving plenty of space for Earle’s guitar, mandolin, and harmonica playing as well as his growling voice.

It was an appropriately epic closer to an epic event. I mean, where else could I wake up on a Saturday morning to hear Stuart Mason singing “Pretty Saro” off his new CD, Tradition, and be able to wander over, plop down in a chair, and listen to this impromptu mini concert firsthand?

Everywhere I wandered through the camp I found musicians jamming, friends laughing, kids roaming, and campsites decorated with all manner of props, each an inviting oasis.

It’s a lot of work to pull the camp gear out of storage, load up the truck, drive 80 minutes south, find a suitable camp spot, and set everything up. It’s even more work packing up all that dirty dusty gear and getting it back into my now filthy truck, only to bring it home and set it up again to try to clean it before putting it away for next year.

Yes, it’s a lot of work, but it’s worth it, because Live Oak memories last a lot longer than the brown boogers I’ll be blowing out my nose for the next week or so.