Live Oak returns: After a two-year hiatus, the beloved local music festival is in full swing

The Live Oak Music Festival returns to El Chorro Regional Park June 17 through 19. RV hookups and large vehicle (22-feet and bigger) passes are sold out. Camping passes for tent and smaller than 22-foot vehicles are going fast, but there are still plenty of day passes available. Visit liveoakfest.org for availability and to learn about family activities and more.

For many families and music fans, the Live Oak Music Festival has been a multi-year and multi-generational tradition—one that for the past two years has been disrupted thanks to a global pandemic. Now it will return live and in person from June 17 through 19 at El Chorro Regional Park, just off Highway 1 across from Cuesta College.

The first Live Oak Fest was a one-day affair at Biddle Park, near Arroyo Grande, in 1989. The following year, it moved to Camp San Marcos off Highway 154, about 80 minutes south of San Luis Obispo, where it remained for 28 years—long enough for Camp San Marcos to be renamed Live Oak Camp. Finally, in 2019, the festival returned to SLO and its new home at El Chorro ... and then the next year COVID-19 changed everything.

The event—the main annual fundraiser for local National Public Radio affiliate KCBX 90.1FM—went virtual the past two years as "Live Oak on the Radio," and as fun as it was listening to recordings of old Live Oak performances as well as live music broadcasts, it was no replacement for the camaraderie of the real thing.

Since tickets went on sale a couple of months ago, RV hookup sites and oversize vehicle (22-plus feet) parking passes sold out, so now only under-22-foot vehicles and tent camping passes remain, as well as single day tickets for the day-trippers.

She estimates that all camping passes may sell out this year.

"I have a feeling people are going to be disappointed if they wait much longer. I anticipate we'll have day tickets available, but we could sell out of those too. We never have before in 34 years, but this year is very different."

Let's face it: People are tired of being cooped up, and the thought of gathering with friends and family over the Father's Day weekend in a beautiful grassy campground to listen to music sounds grand.

The festival has only been at its new digs once, but organizers learned a lot that first year and have adapted accordingly. One reason for the reduced number of large vehicle passes is that "Acreage-wise, there is a little less [space]," Maggelet explained, "but we created some new tent-only areas, and we have some new areas in which to camp.

"All told, we're down about 1 acre of camping area," she continued. "We're trying to encourage more people to tent camp, and we do have room for that. There's even a place where you can hike up the hill, and it's a walk-in-only tent camping area. We're calling it Campo Alto as kind of an homage to the old location," Maggelet said.

At Camp Live Oak, they had a hike-in-only spot called Campo Alto.

"They did that for many years," Maggelet recalled, "and then things started to get a little crazy up there because there was a lot less visibility and a lot less security. My understanding—and I was not up there—but things were getting a little spicy! So, the festival decided to change that to the long-term parking. That's why we named this spot on the hill Campo Alto as a fun little recognition to that part of Live Oak history."

Those at the 2019 festival may recall the overflow camping on a fairway of Dairy Creek Golf Course. That's no longer available, so the festival had to get creative with space. But honestly, the overflow area felt so remote from the rest of the festival that it was less than ideal.

Also, at the old camp off Highway 154, concertgoers were funneled through the vendor area to reach the stage, but not at El Chorro in 2019. Vendors reported less business. Did they find a way to remedy this?

"We definitely heard that, and we absolutely honored that feedback," Maggelet said. "We learned so much after 2019, and then we had way too much time to think about it because we couldn't do it for two years, but we redesigned the main stage area where all patrons will flow in through a large gate closest to Highway 1, and it's basically a march past not only the craft, art, and merchandise vendors but also the food vendors. We figured that part out, and I think it's going to make a huge difference for those vendors."

Aside from that, things are pretty much the same.

Just like the past few years, Todd and Korie Newman of Good Medicine Presents worked with the festival to book the performers. Considering the last two years of lockdown, it was ... let's say "different" than years past.

"It was a struggle," Maggelet admitted. "If you talk to anybody in the music industry now, all these bands had basically zero income for the last two years, so they're having to charge a little more, and they have to be a little more cutthroat with the gigs they take. I know it was very challenging this year."

Live Oak is a fundraiser for a nonprofit, so its budget is limited. They lost out on some performers because they got outbid.

"We can't offer top dollar to these performers," Maggelet said. "We do it as competitively as we can, but we had a couple of performers who got a better deal and reneged. It was challenging to say the least. We didn't even get our last headliner, Los Lobos, until about a month ago. Usually, we have the lineup completely in the can by January."

"It's definitely a competitive environment for booking," Good Medicine's Todd Newman agreed. "I think it's the combination of two things. You have a lot of musicians out looking for opportunities, but you also have this awakening of all these events happening at the same time." 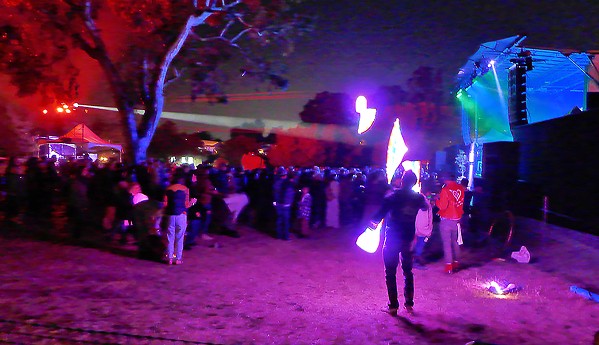 Touring is trickier, too, according to Newman. Municipalities have various COVID-19 regulations, and various performers have their own internal protocols, and then you have acts like Jamaican reggae band Third World that will be traveling internationally.

"To Live Oak's credit, thanks to their heritage and the community that it embodies, artists are definitely interested in working with the Live Oak Music Festival," Newman continued. "You always feel the pressure putting together a lineup that will please the community. I think this is our fifth year booking the festival, and this was definitely the most complicated. Given the complexities of COVID and coming out of COVID, it was certainly more challenging than in the past."

It's not like we're out of the pandemic, but between high vaccination rates and the fact that the festival is outside, for many patrons, it feels relatively safe.

"In the age of COVID, outdoor events are more readily acceptable by the general public," Newman explained. "I'm not a COVID expert, but if you read the many different sources of information that come down the pipe, outdoor settings seem to be less prone to transmission."

For the Newman family, including their two adorable rug rats, missing two years of the festival has been tough.

"In my family's perspective, what the Live Oak Music Festival has offered to this community is truly unparalleled," Newman said. "The communion that happens—in retrospect of what we've all been through the last two and a half years—is really unprecedented. COVID has changed a lot [of normal activites], but this grassroots community that gets together at the Live Oak Music Festival is very representative about what we love most about San Luis Obispo County."

Both Newman and Maggelet wanted to reiterate that the festival has a good chance of selling out.

"If you're interested in coming, I'd say get your tickets now," Newman said. "Just as a reminder, it did sell out in advance in 2019."

"There is some urgency," Maggelet added. "If people are on the fence, they really should buy their tickets. Of course, they can have just as much of an experience coming for a day or multiple days. I mean, it's fun to camp, but I wouldn't want anyone to not come just because the camping is full."

It's a family affair

"This is a great Father's Day, multi-generational event. It's a wonderful way to treat dad and grandpa and get extended family together. You can do it with your family, and your kids are so safe, well taken care of, and so occupied that it's almost like you're out on a date night, just you and your husband. It's a wonderful family experience because you really don't have to hang out with your family," Maggelet said with a laugh.

Indeed, one thing my wife and I really loved about Live Oak when our son was young was being able to turn him loose and leave him to his own devices. The festival just feels sheltered from danger.

"They're just running around like kids should do—free range, safe, doing wholesome activities," Maggelet said. "Everyone there is kind of watching out for everybody else—we call it the Live Oak Way. It's almost like being transported to a bygone era." Δ