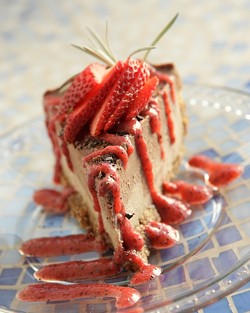 There’s something deceptively simple about a raw-food diet. It’s a way of eating that constrains a chef from significantly altering a food, and certainly from cooking it. Yet, there is a complex theory behind such simple eats and, in California at least, there is a growing movement of raw-food devotees, people who live almost exclusively on uncooked food. And the movement has nothing to do with sushi.

Ask a raw foodist about eating raw, and the first lesson they’ll give is about the term. Many don’t like the expression “raw” food—that, they say, implies that cooked is the natural state of food. Instead, they’d prefer the designation “live.” The second lesson regards how eating live food can be life changing.

Brandie Michelle has been eating live or raw food for about four years, and recently she opened the live food café at Smiling Dog Yoga in San Luis Obispo. Sitting outside at a round mosaic blue table, talking about live food, she seemed to outshine the afternoon sun.

Turns out, this live-food devotee is not emaciated, tired, or sickly. In fact, she appeared quite well-nourished and was excited to share her passion for uncooked food.

Michelle’s transformation began four years and 45 pounds ago when she read a book called Harvest for Hope: a Guide to Mindful Eating, which was co-authored by Jane Goodall. She began to evaluate her own life and food habits, which included eating meat and dairy products.

“First I tried to eat for 30 days only food from Farmers Market,” Michelle said. “I was eating a lot of salads and green, live foods. And it was all local and organic … after a couple of months, I cut out dairy and eggs.”

“The more I learned about live food,” she went on, “the more I just wanted to keep going; keep evaluating and keep cleaning house. I definitely had to make a lot of new friends. I started a garden, I started recycling, and I started being more active.”

There are dozens of books and websites devoted to live food. Most of them agree that live food means mostly vegetable matter, but there are raw milks and cheeses that are considered edible by some live foodies. Also, most live-food advocates accept food that has been heated to no more than 115 degrees, the point at which they say it starts to break down. There are also myriad fermented delectables, including kimchi and kombucha; dried fruits, crackers, and shakes or juices. And, of course, there are unaltered fruits, veggies, nuts, and sprouts to feast on.

The live food movement has a lot to do with synergy; it combines several models for sustainability and environmental stewardship, such as getting fresh, local food that is organically grown with care by smaller farms in a sustainable manner, instead of factory farmed. That, plus it’s considered good for the body. It’s as if a dozen green buzzwords decided to unite under a common moniker: live food.

“Mostly, this is about a consciousness of food,” Michelle explained. “Where it comes from, the intention in growing it. And when you cook food, you alter it.”

One of the main arguments for cooking food versus eating it in a raw state is cooking kills such bacteria as salmonella, parasites, and mold that may be present. Live-food proponents, however, say that eating fresh food and keeping food prep areas clean can prevent food-borne illness.

Then there is the enzyme theory, which many live food supporters consider science to support the diet. They contend humans are born with a finite amount of enzymes for breaking down food in digestion. Raw fruits and veggies come with the enzymes needed for digestion, they say. The theory goes: cooking food destroys those enzymes and the body compensates by consuming some of the enzymes people are born with. Some live foodists even claim that the eventual loss of these enzymes is a factor in aging more quickly.

Beyond enzymes, many supporters of a live-food diet say the benefits are limitless,  ranging from reduced prep time for meals and better health of the immune system. Some devotees even contend a raw- food diet could prevent the common cold, heartburn, and cancer. Those are big claims but at the very least, a diet based on raw vegetables results in substantially less packaging waste. And people who have switched to live food claim to
feel better.

Still, the diet dictates no breads, no pasta, no coffee, no meat, and no eggs. “That doesn’t even seem like food to me anymore,” Michelle said. “It’s not vibrating. The food that I eat vibrates.” ∆