Livestock to be cleared out of Carrizo Plains 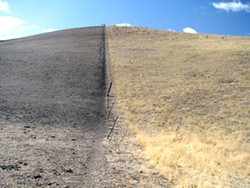 An agreement has been reached in a lawsuit filed by local environmental groups to protect the Carrizo Plain Ecological Reserve from livestock overgrazing.

The settlement made in San Francisco Superior Court Jan. 10 mandates that all livestock are to be removed from the reserve until environmental studies can be completed to determine the effects of grazing on the ecologically sensitive wildlife habitat.

The 30,000-acre reserve is located between the Los Padres National Forest and the Carrizo Plain National Monument in southeastern San Luis Obispo County.

The agreement settles a lawsuit filed in February 2010 by attorneys for Los Padres ForestWatch and the Santa Lucia Chapter of the Sierra Club, which allege that improperly managed livestock violated the terms of a grazing lease.

The California Department of Fish and Game, which manages the reserve, issued the lease in 2006 to Neal Dow of Prineville, Ore. It was renewed in 2009 and allowed for Dow to graze 3,600 cows on the reserve through 2012.

The lawsuit alleged the department issued and renewed Dow’s lease without notifying the public or preparing environmental studies required by the California Environmental Quality Act.

According to Andrew Christie, executive director of the Santa Lucia Chapter of the Sierra Club, the suit came about after visitors to the reserve reported livestock excessively removing vegetation from hundreds of acres of wildlife habitat, causing terracing and erosion on hillsides. They also noted fences in disrepair, which allowed livestock into areas where grazing is prohibited.

“The place was being trashed,” Christie said.

Under terms of the agreement, Fish and Game will terminate Dow’s grazing lease in 90 days, and give him an additional 90 days to remove all livestock from the reserve. The department will then prepare an initial study—which will be available to the public—and determine if there is need for a full Environmental Impact Report.

The department agreed not to reissue any lease on the reserve until the process is completed. In addition, it will make an effort to prepare a long-term land management plan draft by August.

According to the environmental groups, the protected area is home to rare blue oak woodlands and provides habitat to at least 26 sensitive, threatened, or endangered species.

Fish and Game representatives hadn’t returned a request for comment as of press time, and New Times was unable to locate Dow.