A local delivery driver is at the helm of an 11th hour effort to stop proposed water rate hikes before the SLO City Council makes them official. A vote is expected June 19. 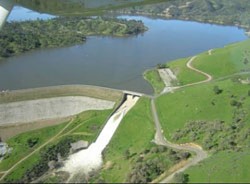 # Terry Mohan said he believes that the council "sidestepped" Proposition 218 which allows voters to approve tax increases and utility rate increases by taking the rate increases to a council vote instead of the ballot. He said he's further outraged that current residents will be paying for a pipeline to bring water for future development.

City residents could be paying considerably higher rates for water as early as July 1, if the city council approves a 13 percent increase for the utility, largely to fund the Nacimiento pipeline, which would provide water to SLO, Paso Robles, Templeton, Atascadero, and Cayucos for an estimated $186 million.

SLO Mayor Dave Romero, however, said the 3,308 acre feet per year that the city would receive is essential to both residents' quality of life and the city's build-out plan.

"I don't mind if they build a pipeline, but I don't want to pay for it," Mohan said. "I don't think the people who live here should have to pay for it. New development is supposed to pay for itself."

Citing Proposition 218, Mohan has sent out more than 11,000 postcards to city dwellers, and is personally delivering 500 more that refer to a "failure of the city council to hold adequate public discussion on this massive taxpayer subsidy of future large development." Mohan is hoping to get at least half of the utility-paying public he's estimating about 7,200 people to vote in a letter to the city clerk opposing the hike. If he can pull it off, rate hikes would stop in their tracks though the pipeline probably wouldn't.

Water has long been a limiting factor for growth in SLO County. Both Cambria and Los Osos, for example, have current building moratoriums to protect the water basin. While SLO city staffers have said that the city has more than enough water to sustain the current population, long-term goals are unattainable without serious conservation and reclamation efforts. And, citing a five-year drought that ended in 1991, Romero and others worry that another drought or a failed dam could leave SLO high and dry.

"It's in the general plan to have sufficient water for build-out," Romero said. "We will have enough to make it to [2025], and should we lose one of our supplies? What this does is give us a third option."

According to Public Utilities Director John Moss, there's a deficit of about 1,300 acre-feet a year to support SLO's projected population of 56,000 if water conservation and reuse isn't taken into account. This leaves SLO with rights to almost 2,000 acre-feet a year more than it needs to provide for the future population. Although it's not in the general plan, Moss estimated that the surplus water could potentially support about 4,000 new households.

City Councilmember Christine Mulholland said she considers growing past the projected build-out of 56,000 living beyond the city's means.

"I believe in resource-based management," Mulholland said. "That means that we look at the resources we have, and how many people that can support, and that should be our build-out number."

Romero acknowledged that a smaller pipeline would cost the city less, but if the city only builds to accommodate 2025 projections, "we'll be in the same situation again."

"More than 50 percent of this is going to new development!" Mohan fumed. "My main grievance is that they are charging the current ratepayers to build the Nacimiento pipeline. Not to be selfish, I'm for moderate growth but I don't see why I should have to pay more to enrich the Margarita area and the airport expansion. Let the developers pay for it."

The Nacimiento pipeline, affectionately referred to as Naci by those in the know, has been in the works since 1994 two years after residents voted down state water. The project came up for public hearings several times in 2004 when the city contracted a design for the project.

The project's cost is now estimated at well above the initial figures. At this point, any of the cities involved could pull out of the deal by Aug. 14, because of the increased cost. Also, Prop. 218 was amended in April to include utility rates as taxes. Prior to that, voters couldn't object to rate increases. In compliance with these changes, the city recently sent out a mailer informing utilities customers of their right to protest before or during the June 19 City Council meeting.

"If I don't get enough votes," Mohan said, "my goal is to get all the disenfranchised: people living in mobile home parks and people in apartments they don't get to vote on this. We could still get a referendum."