A  few years ago, Jake Johnson found himself in dire straights.

He had been arrested for burglary and possession of heroin. Up until that point, he had been in and out of jail, and, according to him, declared dead three times. Things needed to change. So, he began an 18-month treatment program through the SLO County Drug and Alcohol Services. 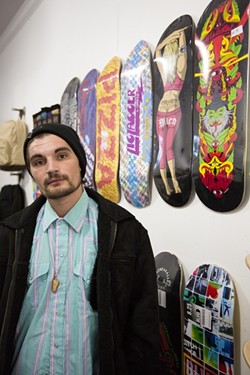 New Times previously covered Johnson’s treatment in a cover story by former News Editor Matt Fountain (“Coming back from the dead”). The experience was, not surprisingly, an intense and trying challenge.

The program demanded rigid adherence to an exacting schedule of counseling meetings, drug tests, and near full-time employment. To cope, Johnson turned to art. During group sessions, he started doodling. It was a return to a different kind of habit for him.

Johnson, who works under the pseudonym R.j. Whittacker, has  been drawing and painting since he was young. As a kid, he picked up skateboarding and became immediately enthralled with the creative aesthetic that surrounded that world.

“I was a curious kid,” he said over a cup of coffee. “I was influenced by everything around me. I would eat skateboarding magazines.”

Around the age of 13, he began sketching and experimenting with geometric designs and oils on canvas. At the same time, he began experimenting with drugs. At first, it was a means to enhance his art, and then it spiraled out of control. Between 2005 and 2008, Johnson only managed to complete two paintings. The drugs had become his fixation.

Now, Johnson’s three years clean and sober. The 18-month treatment turned into a lengthy 2 1/2, during which he developed and honed the artistic skill that had taken a back seat for too long.

“I got to the point where I became this marionette,” he recounted. “There was no light at the end of the tunnel unless I did that [art]. The meetings forced me to pinpoint the image. I didn’t have the colors to distract me.”

Johnson’s style drifted away from oil paintings toward ink illustrations. During some downtime at work in Atascadero, he found a Micron pen and starting shading with it. The drawings evolved into a series inspired by the likes of Dali and modern cubist painter Doze Green. They range from satirical cartoons to eerie images of characters without eyes. He incorporates otherworldly elements into casual scenes—people in animal masks and talking fire hydrants. They walk a fine line between wacky surrealism and the dark cynicism that marked Johnson’s work immediately following treatment.

“Sobriety was like exorcising demons,” he said. “That whole body of work after was extremely dark. I was trying to rid myself of the memories in order to move on.” 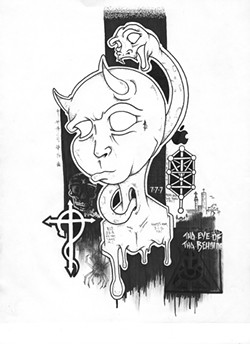 Soon, Johnson began posting these images on Instagram, and they caught attention. A friend of his offered him exhibit space at a salon in Pismo Beach. He had never framed or a sold a piece before. Out of the 15 pieces he submitted, he sold eight almost immediately. Currently, Johnson’s been working on the image campaign for a sister company of KR3W denim, but that’s far from the only project he’s working on.

Around the same time Johnson started working more and more on his art, he started HoodxRitual—an independent music label created with friends Tommy Vaughmpiro and Reuben Sawyer. Like with his art, music’s been a passion of Johnson’s since he was young and sharing cassette tapes with his buddies. He graduated community college with a degree in music production and, for a time, worked at the legendary Sunset Marquis recording studio, witnessing the likes of Steven Tyler and Amy Winehouse. HoodxRitual is his attempt to bring back that early ’90s youth culture of DIY mixtapes and hand-printed zines.

“I was an ’80s baby who saw the Internet happen, but it happened so quickly that people don’t absorb anything,” he explained. “We wanted to take those feelings and bring back youth culture the way I experienced it.”

In this way, HoodxRitual deviates from the mainstream. The name itself derives from the mysticism of cult director Alejandro Jodorowsky’s 1973 fantasy epic, The Holy Mountain, combined with the unsavory reputation Johnson garnered from his earlier days on the street. It’s a name with diverse inspirations befitting for a group with diverse ambitions. It’s a hip-hop label, an artistic collective, and an ethos all in one. As Johnson puts it, “our main focus is music, art, and skateboarding.”

This exhibit at PMA Retail Gallery is a big premiere for HoodxRitual. About 12 years ago, when Johnson was 18 and in jail for the first time, he conceptualized a rap song. He loved the lyrically intricate, pop-culture-based humor of the GZA’s “Fame.” He envisioned a takeoff of GZA’s wordplay epic (ex: “Tom Cruised the boulevard, Chris Rocked the song”), but with something he knew intimately—cigarettes.

He wrote up the lyrics, including just about every cigarette brand known to man, but the track never came into fruition. Drugs, jail, and treatment got in the way. Now, on the eve of his 30th birthday, he’s previewing the music video before its official premiere on VICE.

When we sat down at Linnaea’s, Johnson was visibly excited to talk about his work and his goals. He mentioned his 7-year-old son who’s gotten into drawing just as his dad had at that age. At this moment, it looks like everything’s on the up for him.

“It’s literally scientific,” Johnson said. “Those neurotransmitters have the same neurons fire, and I’m able to get high from the creativity. It’s the best rush you can get.”