For most of her life, Marguerite Costigan has been an artist. She’s written profound, lyrical poems and painted vivid scenes, all steeped in the wild and captivating imagery of her natural surroundings. Vultures, foxes, brambles, streams, and barns populate the stanzas and canvases of what Costigan so aptly calls, in her poem “Resolve,” “this forever landscape.” A longtime staple of the Central Coast art and poetry scene, Costigan was recently named San Luis Obispo County’s new poet laureate. In celebration of this honor and of the San Luis Obispo Poetry Festival’s upcoming 30th anniversary, I spoke to Costigan about her beginnings as a poet, her inspiration, and why she continues to set the pen to the page. 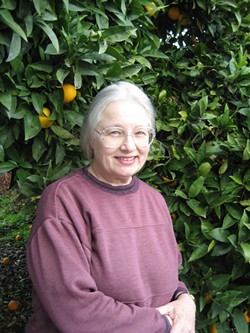 NEW TIMES Do you remember the first poem you ever wrote?

MARGUERITE COSTIGAN The first poem I ever wrote, I was 5 or 6 years old. My parents were just incredible people. [They] were both artists, from New York City, and had all this background of culture that they passed on to us kids. My father had a nervous breakdown when I was 4 years old, we had to flee New York City, and go somewhere quiet, to live in a farm in Pennsylvania, and it was that farm. I had the best inspiration from that experience of living that close to nature, out in the wild the whole time. Any minute I could get free, I was out there; it was so wonderful. I started writing poems when I was 5 or 6, and got several awards through middle school. My first year in high school, I was asked to submit two poems along with all the other people in class for a state anthology. I got a free copy of the anthology, and, to my horror, I opened the anthology and realized that a least two-thirds of the poems were plagiarized from such important and well-known works as Little Women. I realized publishing had its own problems, and academia and teaching poetry had its problems, so I kind of went my own way, and read and read and read … and listened.

NEW TIMES What poets were you reading at that age that really stood out?

COSTIGAN Oh, Walt Whitman, Carl Sandburg, Edna St. Vincent-Millay—these were incredible poets to me. I inhaled everything they wrote, and my parents had anthologies of poetry that I read cover to cover.

NEW TIMES Has your approach to poetry or your style changed at all over the years?

COSTIGAN My viewpoint from which I write has remained the same. I think that way. I think from observing something small and circle outward into larger and larger areas where they matter—divergent thinking rather than convergent thinking. I’ve always written my poems that way. I use “I” and “me,” not trying to puff myself up, [because] I want people to understand this is my only viewpoint, these are the limitations of my viewpoint, and then see how that applies to themselves.

NEW TIMES How does writing poetry differ from something like painting and sketching?

COSTIGAN I’ve been trying for years to combine them, but it’s very difficult. They affect different areas of my brain or are stored in different areas. [With] plein air, I’m overwhelmed by the immediacy, by the stimuli of the environment. A poem will come through. Sometimes, they come through like a stenographer. It feels like that. Other times, I have pieces of it and sew them together. With poetry, I always know when I’m done. It’s the ending that comes to me first and then I aim for it, but in art, it’s really different. I need a whole other side of my brain. I don’t even think; you get out of your head. I turn my thinking and words off when I do art. When I do poetry, I turn off another side, and emotion comes through. … I think emotions are tools for creating things. They’re tools, not bad things. You just have to say, “These are my tools; what can I do with them?”

NEW TIMES What is your typical process when you sit down to write a poem?

COSTIGAN They want you to use the front of your mind, to be conscious about it. That doesn’t work for me. I have to close down and let that sleep, then listen as the poems come through, almost a different language than you use in everyday life. [But] you have to be careful with accessibility. I write things that I think are accessible to everyone. That’s what poetry should be about.

NEW TIMES I feel like a large part of writing is trying to clarify, trying to make sense of things. What about writing poetry still interests you? What about it do you still enjoy?

Jessica Peña has left the New Times basement to see what this nature thing is all about. Drop her a line at jpena@newtimesslo.com.