Drew Davis' work will be on display at Park Street Gallery in Paso Robles through Nov. 30. For more information, visit parkstreetgallery.com.

Drew Davis, a longtime local who grew up in Nipomo and is now based in SLO, started painting and selling his artwork in the community when he was still a teenager. Homeschooling allowed him to graduate early and focus on his art, and Davis' career took off after his first gallery showing.

Now, 18 years later, Davis is well established in the local art community, showing his work at a variety of venues across the county. He currently has a show at Park Street Gallery in Paso Robles. 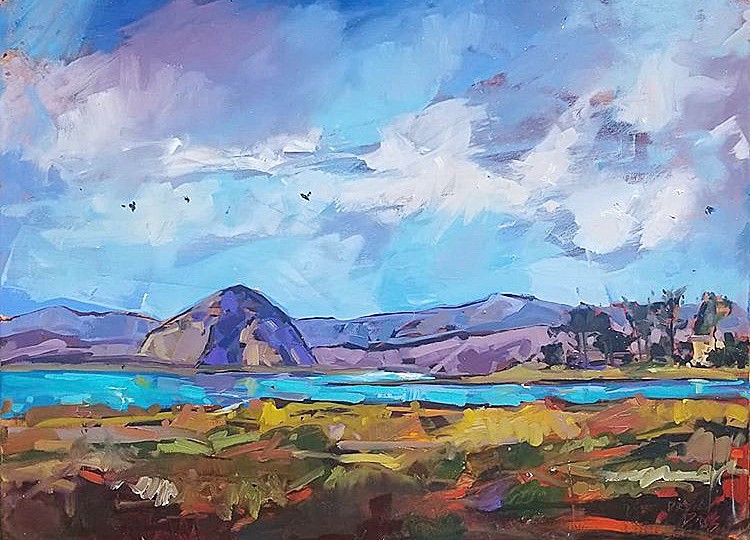 Dabbling in everything from impressionism to abstract work, Davis told New Times that his recent pieces include a series of notable local landmarks, many of which are up at Park Street Gallery. The landscapes in these works are immediately recognizable to the local eye, yet Davis makes them uniquely his own through his distinct style and painting the familiar scenes from less common vantage points.

Sweet Springs depicts the majestic Morro Rock that finds its way into many local paintings. But Davis' work sets itself apart by painting the classic local landmark from across the bay, over in Sweet Springs Nature Preserve. From this perspective, Morro Rock is farther away and becomes less of a focal point for the painting, instead being balanced by the lush foreground, the bright aqua blue bay, and the surrounding hills and eucalyptus trees. Davis' careful framing of the scene and attention to detail gives a new take on a well-documented landmark. In classic impressionistic style, his exaggerated colors (bright purples are found in the sky, on Morro Rock, and in the green foreground) breathe new life into a quintessential Central Coast scene.

Davis said that when he isn't painting on-site (en plein air), he uses photography to capture moments that he will later reference when he paints.

"I'm always taking photos. I would say I'm almost as much of a photographer as a painter because I love to use the photos as reference," Davis said. "If I have some good photos I've taken, I like to make sure I go and paint them. It's nice to be able to capture those memories and experiences."

For impressionism especially, which focuses on the specific light and contrast happening in a given moment, having a fresh memory of the scene is vital to making the painting work.

In addition to his fresh landscapes, some of Davis' recent works take a different direction, featuring figures in motion against completely abstract backgrounds. While the figures are representational, meaning clearly recognizable as what they're meant to depict, the contrasting backgrounds add a sense of motion and energy conveyed through bold brushstrokes and bright colors, rather than clear images. The result is two typically opposite styles of art juxtaposed in perfect balance: Because the moving human figures are layered on equally kinetic backgrounds, it works.

Davis said he finds he has to be in the right mood in order to create abstract work because of the more conceptual images and feelings that these works evoke.

"That's how my current process came about. I really enjoy the initial looseness of painting really abstract and just enjoying how the paint works," he said. "It becomes an underpainting. I'm not actually trying to finish it as an abstract. ... I'm bringing that element into my representational work."

Between his distinct take on archetypal California scenes to his ventures into abstraction, Davis is not afraid to break the mold as an artist. And while making a living as an artist can be challenging in its unpredictability, Davis seems to thrive in that type of environment.

"I've learned to just keep going forward," he said. "It's a matter of being persistent." Δ