Lost and Found: Paintings by Tony Girolo is on display at the SLO Museum of Art from June 28 to Aug. 18. An Art at High Noon with Girolo will be held at the museum July 11. The event is free and open to the public. Visit sloma.org for more information.

Artist Tony Girolo is from San Luis Obispo, born and raised, but his love of art began in Geneva in high school, when his family moved there for a time when Girolo's stepfather was working abroad as a professor.

"That showed me [art] is something viable that you can do," Girolo said.

As a teen, the local's art even hung in the SLO Museum of Art when he won the Arne Nybak Painting Award at the museum's annual countywide High School Art Portfolio Competition. After going to art school and moving away, Girolo is back in town and his art is back at the SLO Museum of Art as part of the Lost and Found: Paintings by Tony Girolo exhibit.

"It was an ego boost," Girolo said of having his art displayed as a teen. "I got this sense of identity, almost."

After graduating from SLO High School, Girolo continued his art education at St. Mary's College of Maryland, including a summer study at the International School of Drawing, Painting, and Sculpture in Italy, before graduating in 2003. He later attended the Pennsylvania Academy of Fine Arts to acquire his MFA in painting in 2006, before returning to San Luis Obispo to make his living as an artist and a teacher.

These days, Girolo works mostly in acrylics. He used to have a studio space at The Bunker SLO, a collaborative space for artists and makers. He describes his work as abstract and figurative, which is a nod to the title of the show, Lost and Found, which includes his abstract and representational paintings. 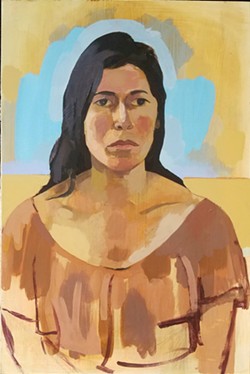 "It's like different moods," he said. "I've always gone back and forth."

Girolo also works a day job as an eligibility worker for programs like CenCal for the Department of Social Services.

"It's been interesting how it's fed the art because you're dealing with human stories," Girolo said. "It's heavy stuff. You carry that with you."

Girolo feels that the title of his show has a double meaning, in addition to referring to his mix of artistic styles.

"It summarizes the process," he said. "I'm trying to be open. I want the work to unravel. There's something that can be found in that that's better than an intention." Δ

Corrections: This article was updated on July 3 to correct errors related to Girolo's background and a caption that contained inaccuracies.