Artist Jordan Quintero's reception for his show at Dune Central Coast (641 Higuera St., entrance on Nipomo Street, San Luis Obispo) will take place at Art After Dark on Dec. 13 (note that Art After Dark occurs on the second Friday this month rather than the usual first Friday). Learn more about Quintero's work at jordanquintero.com. His gallery and studio is located at 2216 Sunset Drive, Los Osos.

After spending his teenage years in San Luis Obispo County, receiving a formal art education at UC Santa Cruz, and exploring the arts community in San Francisco, local artist Jordan Quintero today finds himself back on the Central Coast.

"The plan was just to stop over here for a couple months, do some projects for my family, and then go to LA to explore the art scene down there," Quintero said.

But instead, Quintero found himself sticking around. While simultaneously starting up his architecture business, he continued to make and show art around town. His next show at Dune Central Coast, a mid-century, modern-style furniture store, will be on display at Art After Dark on Dec. 13. The mixed media series features landscape scenes rendered on wood panels.

"I've always been sort of averse to doing [landscapes] because it is so saturated around here with landscape painting," Quintero said. "So I'm going about it in my process."

That process includes a culmination of building the wood panels, digital work, and preliminary pencil sketches.

"I workshop the images on my computer and do value studies ... [until] I'm comfortable with the image. ... I made a series of hardwood panels with sustainably harvested maple wood," Quintero said of his unique methods. "I'm interested in the mystical, mathematical stuff that goes on in natural patterns."

Quintero also noted that his process includes working on multiple pieces at once.

"I'll start one, and then I'll start another one, and that way they'll speak to one another, and I can explore different ideas and modulations," he said.

Inspired by local scenery, Quintero said his work should feel familiar to the audience.

"These landscapes have that quintessential California character," he said. "It's going to be interesting to see how people connect to different spots, and see what kind of stories they can bring to the work."

Yet, the classic landscapes stray from tradition through an abstract style.

"There's a lot of abstract expressionist sensibility about the way that I work," Quintero said. "But there's also representational elements that those gestures, movements, and techniques are hung on."

While landscapes are clearly discernible in Quintero's pieces, the nature scenes he paints are often abstracted by contrasting textures, bright colors, or patterns that juxtapose the natural settings. Yet, his works remain grounded in natural elements through the images they depict and the wooden panels they are painted on.

As for the meaning behind his paintings, Quintero said he hopes to highlight Native American motifs in his work. 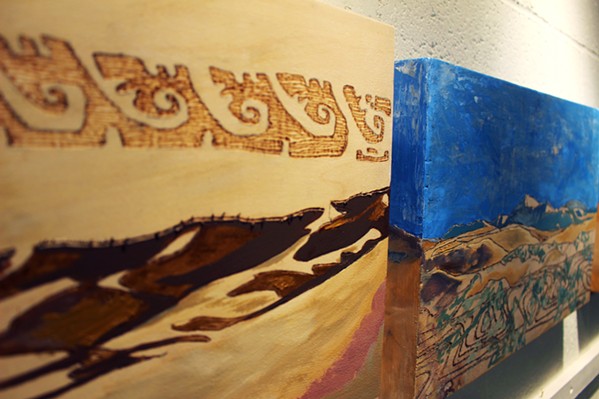 "It has a lot to do with feeling like we need to connect with the land in the way that native people did," he said. "They had these mythologies [about nature], they were part of the cosmology of people's consciousnesses, and I feel like there's this tragic disconnect between people and the land. There's a loneliness there, an emptiness, in these landscapes."

Before Quintero moved back to the Central Coast and found himself inspired by these local landscapes, he and a few partners owned Branches Mobile Gallery, a company that designed, built, and installed art at music festivals.

"I was partnered with the creative director for Lucidity Festival and helped them run their art program for the first few years they did the festival in Santa Barbara," Quintero said of the Burning Man-like festival held annually at the Live Oak campground just down the coast.

Quintero shared just a small snapshot of how much behind-the-scenes work goes into festival installations.

"We would curate group shows with 30-plus artists, build the space, get everybody in, get all the artwork, make all the labels, build an inventory database, manage the whole show, sell a bunch of art, break it down, make sure everybody got paid," he said. "It was a lot of work, but it was a lot of fun."

After working in many temporary spaces over the years, Quintero has decided to establish a permanent space locally that he can call his own. The environmental design office and art gallery is called Roots Gallery + Design Co., and is located in Los Osos.

Though his time living in a big city presented certain advantages, such as a younger populace and a larger art community, Quintero said he has seen SLO grow and evolve over his years of being acquainted with the area.

"After the six or seven years that I've been here, it's becoming more feasible and accepted for people to take the creative route," Quintero noted of the local art scene. "There are people that are starting to really push for working artists, especially younger artists, to have the means to exhibit, and to create, and to have an audience." Δ