Morro Madonnas, featuring the work of Maysha Mohamedi and Maureen St. Vincent, will be on display at the SLO Museum of Art through Sept. 1. Visit sloma.org for more information.

When Maysha Mohamedi walked into an art class at San Francisco State University years ago, the last thing she expected to find was a reminder of home.

But that's exactly what she got when she spotted a young woman wearing a shirt from the San Luis Obispo Academy of Dance.

Mohamedi is five years older than Maureen St. Vincent, so although the artists were both born and raised in SLO, they had never crossed paths before that art class in San Francisco.

"We were instantly friends," Mohamedi said. 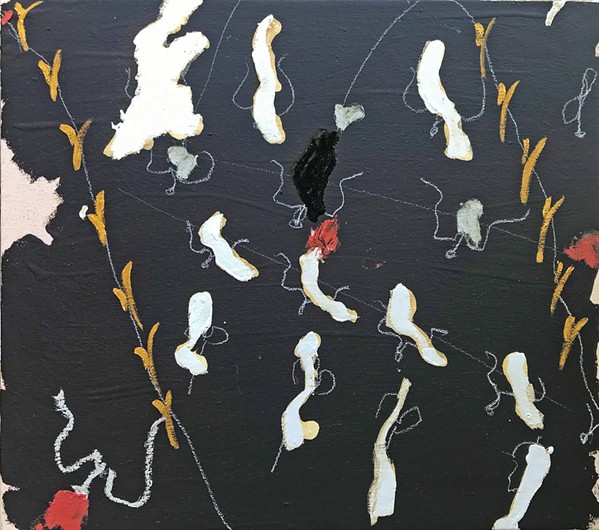 Since then, the two have shown their art together in Los Angeles and New York City. Now, the locals will show their work in their hometown at the San Luis Obispo Museum of Art. Their exhibit, Morro Madonnas: Maysha Mohamedi and Maureen St. Vincent, will show through Sept. 1.

As the daughter of Iranian immigrants, Mohamedi's experience growing up in predominantly white SLO was different from her peers. But her mom, who was also an artist, had her watercolor paintings on display at the SLO Museum of Art back when Mohamedi was a kid.

"Being Persian on the Central Coast was pretty unique at that time," she said. "Having my mom show artwork at the museum made me feel like someone important." 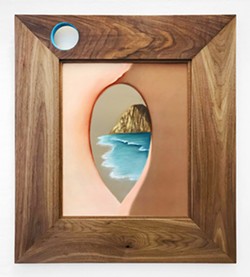 There are a few ways to look at the show's title, Morro Madonnas. It's obviously a nod to Morro Rock, a popular scene for painters.

"For both of us, the landmarks on the Central Coast figured greatly into our upbringing," Mohamedi said.

St. Vincent said there are also other layers to the show's theme.

"The Madonna is a [Christian] motif in historical painting, so it's tongue in cheek," St. Vincent said. "It's also related to the Madonna Inn, which is an influence in my work."

Among St. Vincent's pieces in the show are paintings of a Madonna Inn goblet and also Morro Rock. While St. Vincent grew up in SLO, her grandparents lived in Morro Bay and she spent a lot of time there as well, which inspired her to paint the pastel piece, Erockita, featuring the famous landmark.

"It's this motif that symbolizes the art community on the Central Coast," St. Vincent said. "I love that rock."

While St. Vincent's work is representational, in a fantastical, surreal sort of way, Mohamedi's work is more abstract and expressionistic. In addition to using traditional art materials like oil paints, she also uses more unconventional materials, such as tar found on the beach, in pieces like Diablo. She also takes inspiration from the shapes of the letters in the Farsi language.

For both artists, the exhibit will be the first time showing their work in their hometown.

"It feels triumphant," Mohamedi said. "Since I grew up in a place where community was paramount, it feels really good to come back and bring my expertise to the place that shaped me."

St. Vincent said she hopes their art might throw viewers for a loop.

"It feels really personal and intimate," she said. "I hope they're surprised to see work that they don't normally see in SLO. I hope they see the work and it's surprising." Δ

Arts Writer Ryah Cooley is a native Paso Roblan. Contact her at rcooley@newtimesslo.com.