Different Is The Same, with words by Michael Kincade and illustrations by Steve Kalar, is available on Amazon in paperback for $14.96.

Michael Kincade, the San Luis Obispo County poet behind Positively American, knows a thing or two about the national culture and values. Which is why after the 2016 presidential election, he was dismayed to notice that a lack of respect between people was becoming the norm. And thus, an idea was born: to write a children's book in poetic verse where the message of tolerance might reach the younger generation. Kincade and local illustrator Steve Kalar sat down with New Times to discuss their new book, Different Is The Same.

New Times: What inspired you to create Different Is The Same? 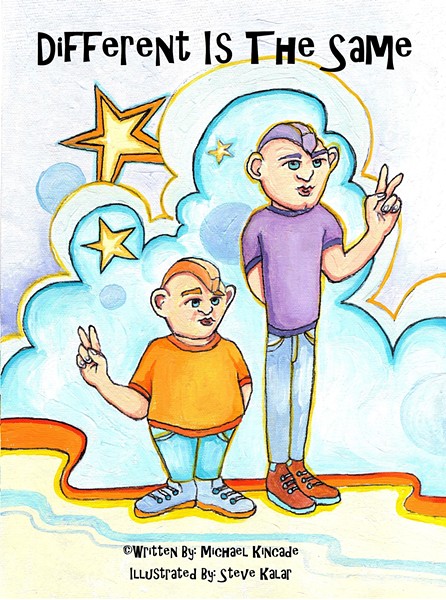 Michael Kincade: I had a previous book called Positively America and had gotten a lot of feedback that respect was something that was lacking in society today, which morphed into Different Is The Same, which is written in poetic style about respect and tolerance. Through my son I met Steve, who is a renowned artist, and we became friends and together we've collaborated on a very powerful book for children.

Steve Kalar: It's something positive. It's absolutely a need in a greater, broader scope.

NT: What age range is Different Is The Same best suited for?

MK: We talk about the age of 3, when children are starting to imprint, to about 10 or 12 years old. For the young kids, just having their parents read to them and teach them about respect is so important, and Steve's artwork is appealing to all of those ages.

NT: Why do you think children today need to hear this message?

MK: One of the things I've noticed is that children are early on learning to single out other children. "Different is the same" is the essence of the book. If we can look underneath all of the differences, we can see that we all want to be respected, loved, and feel like we belong.

NT: What sorts of characters make an appearance in Different Is The Same?

MK: I started to create characters that fit the book. One is a girl whose ears are too big, but she's a mathematician, or this kid with really big glasses. We tried to zero in on our own experiences. There are things kids go through. We wanted the kids to realize that they're all really the same and that if they treated each other the same, that would be a characteristic that would pass on to other people.

NT: What was the creative process like for the book?

MK: The writing was I simply put pen to paper and collaborated with Steve and my daughter-in-law, who edited it, and we also worked with Amazon, which published it.

SK: We worked on it together for about four months.

NT: What other books would you recommend for parents wanting to teach their children about respect and tolerance?

MK: Steve has a book he's working on. Eric Hill's Spot books are very popular and also about respect.

SK: The book I'm working on is called Finding Joy. It was written two years ago by a 13-year-old as a class assignment. Then I ended up doing some illustrations. It should be coming out in January. It's about an older woman who has lost her husband and decides to go out and adopt a cat, and she gets another and another. One of her cats, Joy, gets out and she goes looking for her and doesn't know any of her neighbors and ends up meeting all of these people along the way.

NT: What should readers take away from Different Is The Same?

MK: I just hope that parents understand how important their role is, and that the book will allow them to reassess their own view of respect and then convey that to their children.

SK: Everybody can be affected by this book. Δ

Can't we all just get along? Tell Arts Writer Ryah Cooley why not at rcooley@newtimesslo.com.