While working full time as a lawyer, Lida Sideris relied on nights, weekends, and scattered pockets of spare time—usually in the form of 5 a.m. writing sessions—to finish her first novel.

Sideris released the passion project, Murder and Other Unnatural Disasters, in 2015. The book introduced readers to an adventurous protagonist, Corrie Locke, who, like Sideris, works as a lawyer by day.

But Locke doesn't spend her evenings writing prose. She moonlights as a private investigator.

"Corrie was entirely me in the first draft. I just kind of took a blueprint of myself and started writing—but it was so incredibly boring," Sideris said. "So I had to go back and I had to rewrite it so she wasn't me. I made her unpredictable. I made her have skills that I would never have, or wish I had."

Over the span of the next seven years, Sideris wrote four more books that follow Locke's tenacious heroics. Gambling with Murder, Sideris' newest entry in her ongoing mystery series, was released at the end of March.

While many aspects of Locke's character remain loosely based on Sideris' own traits, the Santa Ynez author gave her plucky heroine a very particular set of skills—as Liam Neeson's Taken character might call it—to make her the ultimate sleuth.

"She's smart, she's accomplished, she's fearless. There's pretty much nothing she can't do when it comes to catching a criminal or case cracking," said Sideris, who often appreciates the escapism of writing fiction. "And that was a lot of fun for me because on the page you can do that stuff, and no one's going to get hurt. It's a lot better than me going out there and attempting to do anything like that."

One of the skills Sideris gave Locke was a mastery of various weapons, including guns. Sideris had never shot a gun before, but she wanted to see what it felt like before attempting to describe the feeling in her debut novel.

"Most importantly, I wanted to know what it smelled like. I used that in the first book—it smelled like someone lit a thousand candles," said Sideris, who found the scent she was looking for at a local shooting range.

"I do sometimes try to do things myself, or at least try to visualize myself doing it to the extent that I can, so I get a feel for what she [Locke] might be doing," Sideris said. "I have tried lock-picking too, I can do that to a certain degree—not like her though." 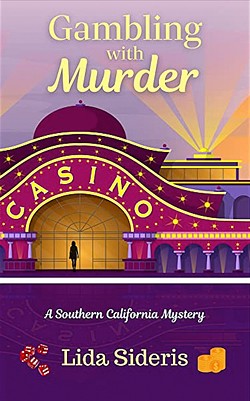 During her latest adventure in Gambling with Murder, Locke investigates the disappearance of a retired politician, Dom Rosetti. In order to infiltrate Rosetti's residence within a posh retirement community for senior citizens in Santa Barbara, Locke employs her mother to go undercover and live among Rosetti's neighbors.

Sideris said the character is not based on her own mom but feels like an amalgamation of people she's met.

"Everybody is inspired by somebody," said Sideris, who teams Locke up with a handful of different sidekicks throughout the five books.

Some members of the author's supporting cast are based on friends and acquaintances, while others were inspired by celebrities or random individuals "I've just had a brush with," Sideris said.

Zachary Levi, the star of Shazam! and Chuck, checked both of those boxes.

"I happened to run into him accidentally in Westwood Village," Sideris, an avid Chuck fan, recalled. "I just saw him standing in line in front of a Starbucks."

Sideris later based Locke's best friend and love interest, Michael, on her impression of Levi.

"He was so kind. He just seemed like a wonderful, wonderful person," Sideris said.

Although Gambling with Murder is the fifth in Sideris' series, the author said the book is accessible enough for readers to jump into without reading the previous entries.

"I don't think you need to read the rest of them, but you're welcome to," Sideris said. "I definitely write them as stand-alones." Δ