At 12 years old, Clover Blue has no idea when his actual birthday is or who his actual parents are, but he does know he's happy living in Northern California as part of the Saffron Freedom Community. Through Blue's eyes, San Luis Obispo author Eldonna Edwards crafts a story that is part mystery, part love story, and part coming-of-age tale in her most recent novel, Clover Blue, hitting stores May 28. 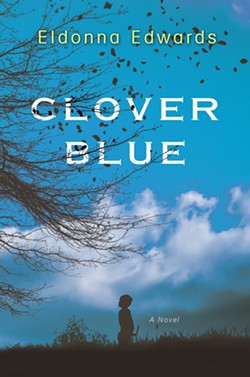 Blue knows that everyone in his rural, nature-loving community—made up of a surfer, a midwife, a Grateful Dead groupie, a Vietnam deserter, and other characters—is family, but he begins to ask questions. And, for the first time, group leader Goji's answers don't satisfy.

Edwards, who is a Central Coast Writers Conference coach and a West Coast transplant, visited the themes of religion and the supernatural in her first novel, This I Know; she took inspiration from her fascination with communes for her second fiction book. Edwards spoke with New Times about the 1970s, living off the grid, and forgiveness.

New Times: How would you describe Clover Blue?

Eldonna Edwards: Clover Blue is about a boy who grows up in a 1970s California commune not knowing who his parents are.

NT: Where does the story take place exactly?

EE: It's set outside of Freestone, north of Santa Rosa. The commune's sleeping quarters is an elaborate tree house.

NT: What inspired you to write Clover Blue?

EE: I just missed all the cool stuff. I always imagined how cool it would be to live off the grid and be in nature. It kind of got my imagination going. I like writing about tribal identity. It's a spiritual commune.

NT: Would you describe Clover Blue as a young adult novel?

NT: What is life in the commune life for Blue?

EE: He loves his life. He has all this freedom. It's clothing-optional. They're all vegetarian. A birth causes him to question his paternity.

EE: There was this huge movement of people, people who were destined to follow in their father's footsteps as a doctor or lawyer, and they said, "Screw it, I'm going to go find myself," and that's Goji. He travels and brings back this collage of Eastern philosophies and starts a commune. Everyone gives up their name when they join the commune and they get new names, but no one knows where Goji's name comes from.

NT: Who should read this book?

EE: I think baby boomers are going to dig this book, but also people whose parents are baby boomers and they really want to know about that era. They were like adult children.

NT: What do you hope readers take away from Clover Blue?

EE: I really hope that they'll consider that the truth is a malleable thing and everyone has their own truth. What may be true for one person may not be true for another. Also forgiveness. The book is about forgiveness and realizing that we can be hung on this hook or we can pull the hook out of our own jaw and live our lives. Δ

Arts Writer Ryah Cooley could see someone starting a cult up in Big Sur. Contact her at rcooley@newtimesslo.com.