Joe Eister's Out of His Mind is available
online at Amazon, Barnes and Noble, and iBooks.
Prices range from $5.99 to $9.99 for digital or
physical editions.

It's always a struggle to listen, really listen to that little voice inside your head, offering up exactly the right thing to do. But what happens when there's more than one voice and they're all saying something different? 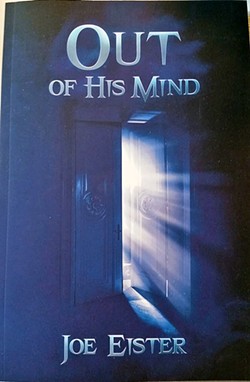 There's been a murder in San Luis Obispo County, and Anthony, the schizophrenic protagonist in Joe Eister's debut novel, Out of his Mind, can't figure out which of the voices in his head is pointing him toward the truth of what really happened. The SLO-based author and Transitions Mental Health employee sat down with New Times to talk about writing, mental health issues, learning not to judge others, and more.

New Times: So what is Out of His Mind really about?

Joe Eister: It's funny, but I saw what it was about after I wrote it. It's really about parents' influence over their children. In three different stories, you have Anthony who has schizophrenia, and his mother is in the story and she's constantly influencing his decisions. And then you have Sherriff Tim Callahan and his father was the sheriff before him, and so there's that influence. And then you have Snake, and he was influenced by his father and his father was a criminal so he developed down that road.

NT: Where did the inspiration for Out of His Mind come from?

JE: Well I work in the mental health field, I work for Transitions Mental Health. I used to have clients who had different mental health problems and some of them had schizophrenia, and I know someone in my personal life who has it as well. So I became curious about what it was, how it got treated. The Vietnamese look at it as a spiritual problem whereas in the West we look at it as a medical problem. There's also a culture that believes people who have schizophrenia are communicating with another world, the afterlife. And I thought well, what if they're right?

JE: I've done it for a long time, different ways. I have a pretty extensive theater background, so I would write one-man shows and then I've written short stories. Out of His Mind started as a short story about five years ago, and I saw that it was going to be too much and I wasn't ready to tackle it. So I stored it. And one day I was looking for something to write, and I found it and I said, "OK, let's do it."

JE: I usually write biographies of characters first, like pretty extensive biographies. I've got to get to know them first. You can't see it all, but the best parts of it get in. When I write, I'll write a paragraph sometimes and spend an hour adjusting it.

NT: What are you hoping that readers take away from your book about mental health issues?

JE: Well people that I know tell me that when they walk down the street and see someone who's homeless they don't look at them the same way anymore, they humanize them. They don't necessarily go right to a judgment. When I heard that, I was very happy. I just want them not to judge people. That's probably the main thing.

NT: What inspires you?

JE: I do best when I'm helping other people, when I'm being of service to other people. So I spend quite a bit of time doing that, outside of work even. It's best for me to kind of stay out of my head.

NT: Do you have any upcoming projects?

JE: I have one in the works right now. It centers more on homeless people. It's set in San Luis Obispo again. It has to do with a homeless guy who solves a murder and how he uses the different talents of the people in the homeless community to help him do that.

JE: John Steinbeck's Cannery Row is my absolute favorite book of all time. I love Stephen King and Raymond Chandler. I constantly refer to those three people when I want to get an idea of how I want to describe something. Δ