Some day when this quarantine is all over, I sure hope someone has the wherewithal to compile all the great songs being written in response to COVID-19. The most recent entry is "Six Feet Apart Or Six Feet Under," written by award-winning singer-songwriter Ted Waterhouse of The Jump Jax.

"Some music friends had been knocking around song titles via text back when the whole shelter-in-place thing started, and my pal Madeline Royal of LoveLiveMusic came up with 'Six Feet Apart Or Six Feet Under,'" Waterhouse explained via email. "I thought it was great but didn't get any real traction on it until last Thursday when this just came to me real fast—the way a lot of good songs do.

"I picked up a guitar and just sang the title against this 2-5-1 progression, and that got it started," he continued. "I had a sketch recorded on my phone a couple of hours later and sent it to friends. Recorded the finished version in my home studio—Cabin 2—two days later at the suggestion of my bassist, Dave Block, who thought I should get it out to radio—which I'm doing; listen for it on KCBX and KPIG. I'm hoping it'll strike a chord, pun intended. My old National Tricone guitar [shown in the photo] made a rare appearance on the track."

Like a lot of Americans, Waterhouse is none too impressed with the federal response and Trump's handling of the pandemic.

"I realize this might hit some folks wrong, Trump supporters in particular, but I'm just telling it like I see it," Waterhouse explained. "I know it's a very serious subject, but I thought we'd maybe had enough of somber just now. Oh yeah, and Madeline [Royal] definitely gets a co-write on this song. Don't think I'd have gotten that title by myself!"

Waterhouse and his band The Jump Jax will perform a livestreaming concert on Sunday, April 26, at 2 p.m., available on the Basin Street Regulars' Facebook page. Find his new song on YouTube and his website.

Local singer-songwriter Emmy Follett, who goes by Fezt online, has her own quarantine story.

"I live in Cambria and just got back from Thailand on March 24," she wrote in an email. "My 14-day quarantine is over, but I will continue to be careful about the virus. Hope you stay safe."

She sent links to two songs on her Facebook page @emmyfollett, the first appropriately called "Quarantine," which she wrote on her first night back home: "You remember the night that we met/ We were laughing together/ and you said you would go on a trip/ want to have some adventures/ Then I saw you post all those pictures/ like you're having a great time/ Then suddenly you have to go home/ because the bottle was shutdown// I know, it's sad, I cried, it happened to me too."

She also wrote "Ghost" in quarantine, which she describes as a "conversation I have with a ghost in the house."

I'm sure Echo Canyon would love to play a live record release party. The power trio is releasing their sophomore album, Dark Skies, on Friday, April 17, and they've posted a couple of tracks on YouTube to give you a taste.

"The track 'Eclipse' is centered around a melodic bass groove that breaks out into a hard-hitting, powerful chorus, and exciting ending," they wrote via email. "The track 'Apex' is a sonic journey through three moods, the first being aggressive drums with melodic bass and guitar lines, the second, a chilled-out groove with singing guitars, and finally the third, a long breakdown with the band finally all coming together in a brutal, ass-kicking finish."

These are both great tracks from some players with serious chops! "Eclipse" starts like a light rain but soon turns to a full-blown storm of guitar, bass, and drums—a thundering instrumental with some surprising time signature changes. It's rock with jazzy flair.

Echo Canyon is Drew Lewis (bass), Dave Pruett (guitars), and Matt Elston (drums). Check out their tracks on YouTube and look for their new album this Friday. 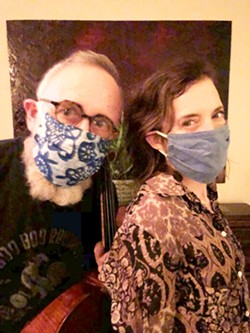 Bob and Wendy "have been doing two-song sets every other day," they said via email, but they'll do longer sets on Facebook Live (@babandwendy) on Thursday, April 16, and Tuesday, April 21, both at 7 p.m. If you've never seen this duo, don't wait! Wendy's an amazing songwriter with a gorgeous voice and is a solid guitarist, and Bob is a terrific cello and mandocello player.

Sharine Borslein emailed to say, "My band, Sharine and the Moonlighters, streams live mini-concerts every Saturday at 4 p.m. from our studio in Atascadero, using my Facebook @sharine.borslien. We're a trio that frequently brings on board our drummer/percussion player. We create a theme for each concert. Last week was 'Champagne and Limousines,' and this week is 'Songs from Mother Earth!' We'd love to reach more SLO County music lovers!" Tune in this Saturday, April 18!

If you're a local act with a streaming show coming up, send me the details. Let's do this! Δ