Local beaches will benefit from cleanup

Old-fashioned transportation horses will be called upon for help with a modern-day problem trash on local beaches during the Coastal Cleanup Day on Sept. 15. 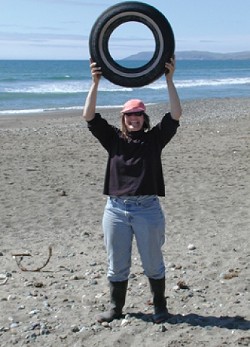 # Hundreds of local families, surfers, and other beach-lovers are expected to take part in the beach cleanup effort, picking up around 6,000 pounds of trash and recyclables strewn in the sand at 25 popular local beaches, according to organizers.

This year, for the first time, the Oceano Dunes Off-Highway Vehicle Recreation Area will also be included in the cleanup effort, with volunteers using horses to access the beach and dunes, and haul out the trash collected.

"It's a really important day. Our beaches don't get cleaned up often, which is a huge environmental problem," said SLO County organizer David Kirk of ECOSLO.

"It's also important for our local economy. Imagine what it would look like if three tons of trash piled up on our beaches every year we wouldn't get a lot of tourism," Kirk added.

The Saturday event is the 23rd annual Coastal Cleanup Day, part of an international effort to remove trash from the marine environment.

Locally, the most commonly found items are thousands and thousands of cigarette butts, along with recyclables, tires, engine parts, and plastic, Kirk said.

"It's a problem for marine life, plus there's the human health concern," he explained. "Tires, transmissions, cigarette butts in the sand are all pretty toxic. You don't want your kids playing in that."

Volunteers can just show up at their favorite local beach, from Piedras Blancas to Pirates Cove to Point Sal, around 9 a.m. on Sept. 15. ECOSLO's website at ecoslo.org lists all 25 of the beaches involved.

Like the Oceano Dunes cleanup effort, the Point Sal event is also a little unusual: Volunteers have to hike in two miles, and carry out any trash they find. They'll meet at the west end of Brown Road, one mile south of Guadalupe on Hwy. 1, to hike in to the beach together.

Pirates Cove is another offbeat site, with its well-known "clothing optional" informal designation.

"We provide the trash bags, gloves, trash picker-uppers, and that warm fuzzy feeling. The cleanup ends at noon, so you still have the whole day left to enjoy the clean beach," Kirk said.

The beach at Morro Strand will also be the site of another international event starting at 7 a.m., known as Paddle Out for Water Quality, according to organizer Noah Smukler of the San Luis Bay Chapter of the Surfrider Foundation.

"We're supporting the federal Beach Act, to keep track of contaminants in the ocean water and identify solutions. It's a symbolic act, as we all paddle out together.

"Surfers, boogie-boarders, body surfers, swimmers just show up with or without your board or flotation device. You can ankle-swim if you want that counts," Smukler said.

One of his favorite aspects of the annual beach cleanup is meeting other volunteers who care, he said.

"This is my neighborhood beach, at Morro Strand. I'm excited to meet my neighbors who love the beach as much as I do," Smukler said.

"When you get together with a large group, on a worldwide level, you can step back and see the worldwide effect, which is noticeable and tangible," he continued. "It shows what individuals working together can accomplish. It brings continuity to individual efforts to help our oceans."