Prepare yourself for the return of Shabang, the biannual music festival that, according to co-founder and fourth year Cal Poly student Greg Golf, brings “together the greatest aspects of life—friends, family, art, nature, and music—to create a euphoric experience for our fans and inspire love for the Central Coast through charitable donations.”

The first Shabang, ironically billed as “The Last Shabang” in spring of 2014, has returned every six months and continues to get bigger and bigger. They’re expecting 3,000-plus attendees this Saturday, May 6 (2 to 9 p.m.; all ages; $5 presale at shabangslo.com/tickets; $7 at the door).

“The crowd has grown sizably larger every Shabang and things have changed along the way, but the mission has been to keep the event as grassroots, DIY, and awe-inspiring as it was the first time,” Golf notes. The event is particularly aimed at Cal Poly students. For $12, which includes admission, you can catch a shuttle at Campus Bottle near Cal Poly. Those who prefer to drive can park in Madonna Plaza and walk across Madonna Road.

“We started out in 2014 as a group of friends with a guitar on a mountain and have grown to an event with 2,000-plus attendees,” Golf added. “We also make a large donation to a local nonprofit that our fans vote on prior to the show.”

Last fall, Shabang donated $2,000 to the ECHO Homeless Shelter, which bought food and hygiene products for SLO County’s homeless. This time they’ll be donating to the Women’s Shelter Center of SLO County.

“These artists are primarily Central Coast rock bands with influences being drawn from the psychedelic, surf, and punk rock genres; at the end of the day it’s all straight up California rock ’n’ roll,” Golf said. “Later that night there will be an after-party for those of age featuring DJ SPYK3 and Alt9, drink specials, and free cover with a Shabang wristband, at a location to be announced.”

“Over its tenure, Shabang has become something more than a small music festival for the fans. It’s a place suspended in perfect youth, where expressions of self are encouraged and accepted, and waves of euphoria never stop rolling through the crowd. At the end of the day, nobody leaves saying they didn’t have one hell of an experience,” Golf finished. 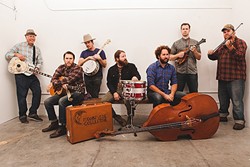 “The Red Barn Community Music Series is trying something new—an entire afternoon and evening of acoustic Americana roots music, from traditional folk to Cajun to old-time country to jug band—on Saturday, May 6,” organizer Jonas Richardson said. “We hope to make this an annual event.”

The all-ages Central Coast Folk Festival runs from 1:30 to 8 p.m. and includes 10 performers all for $35 presale tickets at centralcoastfolkfest.com, or $40 at the door.

“From Oakdale, Willy Tea Taylor is bringing his well-crafted stories and tenor guitar,” Richardson noted. “From Los Angeles, Moonsville Collective will be offering their ‘Americana tornado’ music. Local favorite, singer-songwriter Amber Cross, will feature selections from her newest CD. The G Burns Jug Band from San Diego will take you back in time with a pure 1930s sound. Other acts include Cajun, blues, a traditional string band, jug bands, and acoustic folk artists. Food will be available for purchase from food trucks on site; there will not be a potluck at this event. Your admission wristband will get you in-and-out privileges all day. It’s BYOB but keep it family friendly; this event is for people of all ages.” 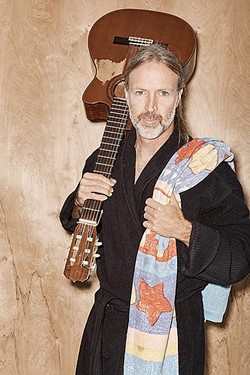 Folk-N-Soak, the three-day music festival at Paso Robles’ Franklin Hot Springs, is back! Hosted by the Christopher Hawley Rollers, the event features camping, camaraderie, crazy-good music, a natural hot springs, and good people! It’s scheduled for Friday, May 12, through Sunday, May 14 (all ages; tickets available at eventbrite.com or via facebook.com/events/189613174884115/?active_tab=about).

“Folk-N-Soak is a weekend filled with healing hot springs, camping under the stars, all day and night live music, yoga in the morning, and connecting with new and old friends in a retreat festival event!” according to a Facebook post from event creator Christopher Hawley, who put on the first festival in spring 2016 and produces these quarterly events to help boost the local economy as well as bring newcomers to a healing retreat.

It’s got quite a lineup! Gates open at 4 p.m. on Friday and the fun starts with comedy by Sean Reilley, followed by music from Thea Rae, Randy Todd, Will Vanguard, Bullyheart, Jenny Liu, Cory Adair, Jac Marino, and host Christopher Hawley. On Saturday at 9 a.m., do some five-element Qi Gong flow then listen to music all day until 9 p.m. with some of Friday’s acts as well as Nadeya, Ryan Blowers, and Adam Ferrick & The Beautiful Noize. Sunday starts with yoga, followed by music from Jac Marino & Nateo, a Hawley Rollers gospel set, and then the bathrobe parade. Good times! Get your tickets now!

John Knutson will bring the Cuesta Chamber Choir and Voce to the Friday, May 5, Brown Bag Concert at SLO’s First Presbyterian Church (noon; all ages; free). Fair Trade coffee and chocolate is available.

Cal Poly alumna Jessica Getman presents George Gershwin’s Concerto in F on Friday, May 5 (3 p.m.; all ages; free) in Room 218 of the Davidson Music Center (building 45) on campus. Getman is the managing editor for the Gershwin Initiative at the University of Michigan, working on publishing a score of the concerto.

Clark Center presents Yesterday and Today—The Interactive Beatles Experience on Friday, May 5 (8 p.m.; all ages; $39 to $45 tickets at 489-9444). The audience gets to create the playlist for the night by filling out cards! The band eschews the traditional wigs and costumes tribute thing and instead concentrates on the music.

Reggae act A La Lune plays a Cinco de Mayo concert at Frog and Peach on Friday, May 5 (10 p.m.; 21-and-older; free). The Modesto-based band moves beyond traditional roots and toward world music sounds.

Unfinished Business returns to D’Anbino for two nights this weekend, starting on Friday, May 5 (8 p.m.; 21-and-older; $15 reservations at 227-6800), with their British Invasion Dance Party and the music of The Beatles, The Rolling Stones, The Animals, The Zombies, The Kinks, The Yardbirds, and more. On Saturday, May 6 (8 p.m.; 21-and-older; $15 reservations at 227-6800), they return with their American Rock and Roll Dance Party and music by The Beach Boys, The Safaris, Creedence Clearwater Revival, Roy Orbison, Chuck Berry, The Byrds, The Lovin’ Spoonful, and more.

Susie Glaze and The New Folk Ensemble return to Música Del Río in Atascadero this Saturday, May 6, (7:30 p.m.; all ages; $20 donation; reservations at 466-6941 or online at musicadelrio.org). “A Nightingale!” organizer Fred Munroe gushed. “We heard this simple description of Susie Glaze before we ever heard her sing a single note. The first time we heard her, it was clear this description was hers to own. Originally a Broadway actress and singer, now an award-winning recording artist and critically acclaimed Bluegrass powerhouse vocalist, Glaze has carried her Tennessee roots across America.”

Jazz on the Monterey Street Terrace features the Dylan Johnson Trio this Sunday, May 7, playing straight-ahead jazz from 11 a.m. to 1 p.m. This one’s free!

Judkins Middle School presents the music of Bappi Lahiri at the Clark Center on Sunday, May 7 (3:30 p.m.; all ages; $50 tickets at 489-9444). Lahiri was “born in Calcutta into a family with a rich tradition in classical music” but “was the pioneer of disco beats in India, and his refreshing, vibrant, and rhythmic music had the entire nation dancing for decades,” according to press materials.

Numbskull and Good Medicine Presents will host Balance and Composure at the SLO Guild Hall this Sunday, May 7 (6 p.m.; all ages; $16 presale at ticketfly.com or $18 at the door). Balance and Composure recently released Light We Made, their third studio album with producer Will Yip at the helm. The new album softens the quintet’s punk roots, delivering a more dreamy, melodic sound with swirling guitars and trippy dance grooves. From Indian Lakes and Queen of Jeans open the show.

Don’t worry, Pozo Saloon fans! The venue’s not dead. Yes, two concerts were canceled recently, but longtime venue builder Tim Reed has stepped in to help the Beanway family stabilize the venue and continue its long history of hosting concerts.

To show goodwill to fans, the venue hosted a free concert last Saturday, April 29, with Randy Houser and others who had been scheduled to play the canceled Pozo Stampede. The event—attended by around 4,000 people—raised $17,580 for St. Jude Children’s Hospital, according to Reed, who is best known locally for being the brains behind the world class Vina Robles Amphitheatre.

Reed said we should expect a period of dormancy as the venue regroups. There may or may not be a fall concert, but he says good things are on the horizon for the venue.

“I’m a venue builder,” Reed said. “I’m the person that can get a venue up to speed, and Pozo has unbelievable character—there’s nothing else like it, one of a kind, just a very special place. Our intent is to preserve that and bring the saloon into the modern touring world.”

Judging from what an amazing job he did with Vina Robles, which by the way he’s suing for breach of contract, Reed has a proven track record of creating incredible venues. He was also instrumental in building the Shoreline Amphitheatre. Prepare yourself for a professionally run Pozo Saloon!