Photos By Jayson Mellom SURVIVEOARS Many of the women who participate in dragon boating on the Central Coast are breast cancer survivors. A popular sport for cancer survivors worldwide, it offers proven medical benefits for those who partake.

The boat jolts forward faster and faster with each unified stroke. In repetitive, synchronized motions, about a dozen paddlers plunge their oars into the calm morning waters of Morro Bay at the same moment, propelling this 40-foot canoe rapidly along the estuary.

At full speed, the vessel feels almost like it's hovering above the water, the sheer collective will of its tenacious paddlers seemingly defying gravity. Achieving this feeling is one of the goals of dragon boating, an ancient Chinese sport requiring strength, concentration, and teamwork—all traits that going through cancer requires as well.

On this Saturday morning, Sept. 28, most of the dragon boat paddlers out on the bay are women who've either battled or are still battling breast cancer. Their twice-per-week ritual of training together—in this case, training for competitive races—is a life-affirming escape for them. Each boat member, seated two per row, holds her own paddle, but they move the boat as one.

"The minute you step on the boat, you're a team," said Miki Gillman of Atascadero, president of the Central Coast Dragon Boating Association (CCDBA) and a breast cancer survivor. "The empowerment comes from moving that boat, and moving it fast."

This particular CCDBA team is well-acquainted with hauling ass on a dragon boat. Last summer, in Hungary, the team took home a gold medal at an international dragon boat festival. This summer, they will travel to France for another competition, with even more paddlers in tow this time. The CCDBA competes in races throughout the year in California, winning the gold at a festival in Long Beach last July.

"It was just epic," Gillman said of the team's past year. "I think it's a testament to our training and dedication to practicing. We work hard, and we try to be in the best physical shape we can." 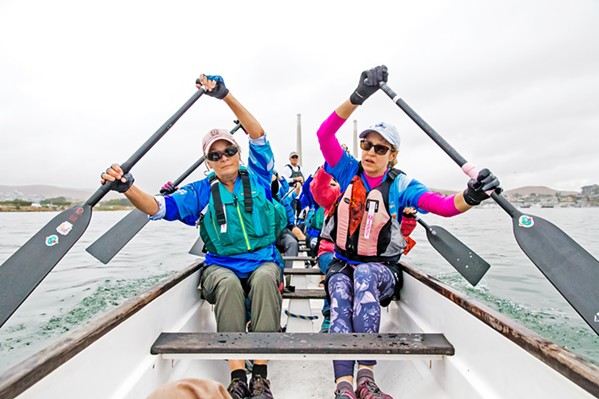 For SurviveOars, as they're called in the CCDBA, staying in good shape can be "a matter of life and death," according to Gillman.

"Because a lot of us have had some very terrifying cancers, we want to just be in the best shape we can be," she said. "When you're feeling half dead from treatment and whatnot, you don't like that feeling. You want to feel healthy again."

CCDBA SurviveOars aren't alone in their attraction to dragon boating. The sport has worldwide appeal among cancer-surviving communities, due to its proven medical benefits. In the mid-'90s, a Canadian doctor's research debunked the long-held theory that women with breast cancer should refrain from strenuous exercise. It found, instead, that the opposite was true, and that dragon boating was a particularly beneficial activity that could even help stave off lymphedema.

"It was found that repetitive, strenuous upper body exercise was actually much more conducive to healing and strengthening after having surgery," said Gail Riley of Morro Bay, a survivor and one of the nonprofit's founding members in 2007.

There are several elements of dragon boating that can prove healing to people going through cancer, CCDBA members said. For one, the serene setting on the bay helps connect paddlers with the outdoors and nature.

"When we get there at 8:30 a.m., there's nobody out on the bay except for the animals—the otters, birds, sea lions, and harbor seals," Gillman said. "It's just magic. It's really special."

Dragon boating also fosters a strong sense of team and community. As far as competitive sports go, dragon boating is the ultimate team game. And for many women who participate, Riley said, it's their first time playing one.

"That's the one consistent comment that I hear from people who are just in love with the sport," Riley said. "When you're in the boat, there is no emphasis on, 'Well, here's our star paddler.' You are only as good as how the team all fits together."

"Timing is incredibly important," Gillman added. "What you want is all the paddles to hit the water at the same time."

Dragon boating's inherent sense of unity helps forge deep bonds among CCDBA teammates. For them, the boat is their shared place to push their bodies, to triumph, to grieve, and to support one another through the trials of cancer. If a member goes through a recurrence of their cancer, they rally around them in support. If she's feeling too sick to paddle, they encourage her to join anyway, to go along for the ride, and feel their love and support

"We all have a level of understanding that's deeper than just anybody, because we've all been through it," Gillman said. "We have had people who have been very sick, and some of our people have actually died." 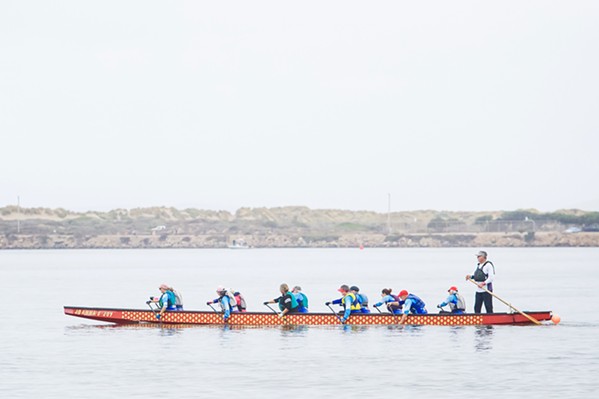 When a CCDBA member "paddles on," as they say, the group memorializes them each time in a ritual done out on the bay.

"We take the boats out and each person has a flower and we spend some time together talking about the person," Gillman said. "It's very moving. When we're done talking we throw the flowers into the water. And then it's very special when we paddle away and watch what happens to the flowers and how they arrange themselves."

Those paddlers always remain in the spirit of the group, Gillman said. Their names are etched in plaques that are affixed inside the dragon boats or on benches at the docks.

"They're still a part of us," she said. "We all learn from each other. We learn from other peoples' journeys, and we all support each other."'

After forming 12 years ago as a small group of breast cancer survivors, the CCDBA is more than 100 members strong today. Over the years, donors have helped supply the nonprofit with three dragon boats, which are made in and shipped from China. Its first boat came thanks to funding from a local oncology group; its second was donated by a team member who passed away and wrote the donation into her will (they named it after her—Joanna's Joy); and the most recent boat came last year courtesy of a paddler's local company.

Having three boats allows the CCDBA to broaden its horizons as an organization. Now, each week, it offers a busy schedule of dragon boat trainings and activities designed for virtually anybody—man, woman, young, old, etc.—interested in the sport. Last year, it welcomed a college team into the mix, with Cal Poly and Cuesta students who paddle out together each weekend.

"We've really tried to encourage other people who want to join us," Riley said. "We're trying to give opportunity for anyone else who would like to benefit and participate in the sport."

For Riley, the teams' diversity is what's become most fulfilling about the venture she helped start.

"It's just such a draw for me, personally, this wonderful group that has become such dear friends," Riley said. "The group is very eclectic in age, in profession, and just who the participants are, and I love that."

For Gillman, it all goes back to the powerful, exhilarating feeling of "moving that boat, and moving it fast."

"It's an incredible upper body workout; it works all of you," she said. "When you have cancer you feel beaten down. ... When you can feel empowered physically, that's what it's all about. That's really what we need. That's part of the healing." Δ