If you are looking to get elected to office in SLO County this June, it's going to cost you. A lot. 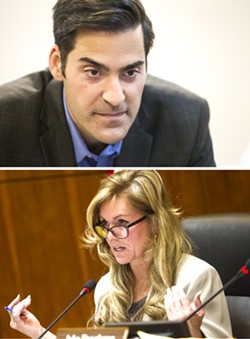 The combined war chests of the various 2018 campaigns dwarfed those raised in the first months of the 2014 primary elections, when many of those same county offices were last up for grabs, by more than $1.2 million, an increase of about 80 percent.

The race for SLO County 4th District supervisor tops the list, with candidates Lynn Compton and Jimmy Paulding raising a combined total of $398,944 so far in 2018.

The two candidates running for SLO County Sheriff reported $381,444 between their two campaigns. In 2014, incumbent Sheriff Ian Parkinson ran unopposed for re-election and raised and spent less than $1,000. Parkinson's campaign raised $253,965 in 2018 thus far. The bulk of that amount came from large donations made after March 16, when the SLO Tribune released video footage of the death of SLO County Jail inmate Andrew Holland. Parkinson's opponent, Greg Clayton, raised $127,479 in campaign funds. Clayton received a $25,000 donation from Holland's father, Carty, in February, and another $10,000 from the Holland Family Alliance for Humane Mental Health and Correctional Reform that same month.

In the race for SLO County District Attorney, incumbent Dan Dow and challenger Judge Mike Cummins raised a combined total of $307,248 since January, more than three times what was raised in the same reporting period in 2014, when the DA's race had three candidates.

SLO County Democratic Party Chair Rosemary Wrenn said the large amounts of money raised by the campaigns were possibly the result of a growing partisan divide at the local and national levels.

"There's been such a polarization of opinions, and each side has been energized," she said.

SLO County Republican Chair Randall Jordan pointed to the involvement of the SLO County Progressives as one reason why the county races were getting more contentious and expensive.

"Unfortunately for candidates on both sides it means they have to get out and raise money to keep up with the fervor of the [SLO Progressives]," Jordan said. "It's being stepped up on both sides. I feel bad for them because they are having to do so much fundraising, but that's politics." Δ