In San Luis Obispo, city officials will buy up gift cards from local businesses to give to residents who are shopping locally. In Grover Beach, small businesses hardest hit by COVID-19 closures can apply for $7,500 city grants. SLO County will spend $1 million to support economic development initiatives.

With the state's latest stay-at-home order sending the Central Coast economy into a frenzy, several municipalities greenlit these new or expanded programs on Dec. 8 to try to stop the bleeding. According to SLO Chamber of Commerce CEO Jim Dantona, the help is critical now given the recent shutdown orders and the ongoing delays in Washington, D.C., to pass a stimulus bill. 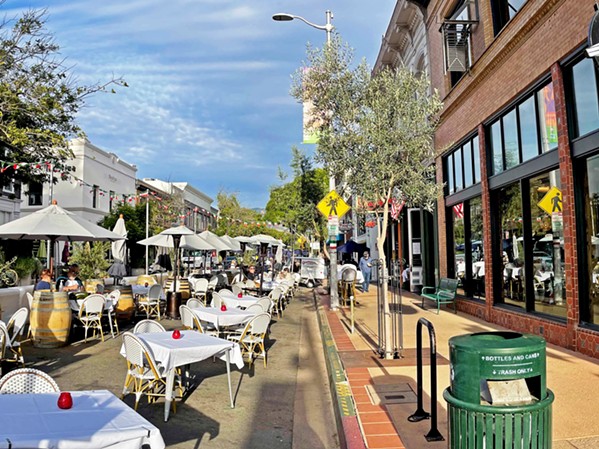 "If you look at the problems we're having with Congress—we're not getting that [assistance] out of our federal government. But our local governments are stepping up," Dantona told New Times. "Seeing Grover Beach and SLO injecting money directly into the economy ... they know that this is what it takes to at least keep something still on the tracks."

The most money—$2 million—will go toward the tenant improvement grants, aimed at helping businesses safely renovate their spaces for the pandemic. The remaining funds will be split between the other programs—$500,000 for small business grants, $200,000 for the shop local initiative, $425,000 for downtown vitality, and $300,000 to hire a full-time employee to spearhead a city response to homelessness.

Beginning Dec. 14, SLO shoppers buying takeout food or holiday gifts from local businesses should save their receipts to get a free $20 gift card from the city. That's the gist behind SLO's shop local program, which will launch starting this month and run to April 2021, with the city spending $50,000 per month on gift cards at local businesses.

While details are still pending, the goal is to hand out gift cards to locals who can prove they recently spent $100 at local retail stores and restaurants. Officials say the program will help stimulate economic activity between now and around the time that vaccinations become available.

"We know that the first quarter of 2021 is going to be an especially difficult time," SLO Deputy City Manager Greg Hermann said at the Dec. 8 meeting. "One of the important pieces of this is really looking to have a program in place now to help support our businesses into the next quarter."

Similar to SLO, Grover Beach is also using future sales tax revenue to roll out its third round of small business grants—which total $500,000. The city is accepting applications through Dec. 14, giving priority to "those industries most impacted by the state's newest order, such as personal care services and restaurants," according to a press release.

At the SLO County level, the Board of Supervisors voted on Dec. 8 to divvy up $1 million to three organizations—REACH Central Coast, the SLO Office of Education's SLO Partners, and Cuesta College and ACI Jet—that are pursuing economic development projects. But it declined to fund some others or to create an economic management position within the county.

While SLO County still has about $3 million in economic development funds to use that it received via state legislation to offset the future loss of the Diablo Canyon Power Plant, the board declined to subsidize "co-working spaces" at the request of chambers of commerce throughout the county. It also dropped plans to hire an economic manager within the county.

That latter decision came as a surprise to Dantona, the CEO of the SLO chamber, who said that position could prove critical to coordinating countywide economic efforts.

"We were actually very much in support of an [economic] person at the county. We think that would've been helpful to help focus the county's energy regionally," he said. Δ