On Feb. 22 (before the COVID-19 pandemic), Larry Fernandez and his daughters, Andrea and Natalie Fernandez, left a bucket of colorful roses at the bottom of the Bishop Peak Trail.

They were there for the sixth annual Martha-Olson Fernandez Foundation (MOFF) Hike and Brunch. Attendees grabbed a rose and hiked to a bench with a plaque commemorating Martha—an avid hiker. The brunch that followed was a chance for attendees to donate whatever they could for amyotrophic lateral sclerosis (ALS) research. 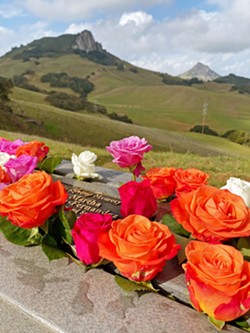 This year's event raised $6,716.80, which was put toward ALS patient care and research.

The foundation was established by Larry and Martha in 2012 a year after Martha was diagnosed with bulbar onset ALS. Initial symptoms of this type of ALS include problems with speech and swallowing.

Natalie was away at college at the time, but she said her mother told her there were two subtle but distinct experiences she had with the disease.

ALS affects individuals living with the disease differently, but all involve muscle weakness and atrophy that spread to other parts of the body. Natalie said her mother could stand up until the day she died—Dec. 17, 2012. Before she passed, Martha and Larry established the foundation to aid researchers in finding a cure for the disease and to help families on the Central Coast find resources and support in their area. The Fernandez family had to find medical care for Martha elsewhere, as there were only two ALS clinics nearby, in Los Angeles and San Francisco.

Natalie said 2013 was tough for her dad, sister, and herself as they grieved for their loss. Her uncle, Danny Fernandez, stepped up and hosted a golf tournament fundraiser for the foundation. The event raised more than $13,000 and gave Natalie's family the spark they needed to continue with the foundation and push it to its full potential.

With a board, a refined mission, and set goals, Natalie said the foundation has been making strides in funding research, reaching out to the local ALS community, and raising awareness of the disease.

MOFF designates $25,000 a year toward the ALS Association Golden West Chapter specifically to help people on the Central Coast with medical supplies, transportation, and communications devices. When MOFF says it donates to ALS research, Natalie said the foundation breaks it down to two categories: basic science and potential therapies.

"It's fundamental to know that if a disease is so complex and you don't understand that, basic science has to exist before you develop a therapy," she said.

From 2017 to present, Natalie said there's been an explosion of knowledge about ALS and the genes that contribute to the disease. She said there are therapies that have the potential to stop certain forms of the disease.

Since 2014, MOFF has given $215,000 to different ALS research projects across the nation and $148,000 to people living with ALS on the Central Coast to assist with patient care. MOFF is working on another golf tournament fundraiser slated for October. Anyone interested in connecting, learning more about ALS, or donating can visit moffoundation.com or email giving@moffoundation.com.

• In support of the SLO Food Bank's pandemic relief efforts, the Federal Home Loan Bank of San Francisco is matching CoastHills Credit Union's recent donation with its own $2,500 contribution. The banks' matching gifts will help the food bank feed 17,500 hungry children, seniors, and families. The SLO Food Bank stated that the contribution comes at a time when the community is experiencing a 254 percent increase in hunger since the outbreak of the pandemic, as shared through a recent study by The California Association of Food Banks in partnership with the Stanford Data Lab. Based on the study, there are now roughly 117,000 hungry SLO County residents, which is 41 percent of the total population. Through bulk purchasing agreements, grants, gleaning operations, and food donation management operations, the SLO Food Bank is able to turn every donated dollar into seven nutritious meals. To learn more about the SLO Food Bank, visit slofoodbank.org. Δ