Most Americans don't remember polio epidemics, which could kill thousands and paralyze thousands more. That's because in 1955, Dr. Jonas Salk developed a safe and effective vaccine that virtually eradicated the disease in the U.S. Other countries haven't been so lucky, but in 1979, Rotary International began a global campaign to end polio, which is ongoing. Local 20-something filmmakers Eriksen and Soren Dickens, who run the media company Platinum Peek Productions, recently completed a short film chronicling Rotary's immunization efforts. 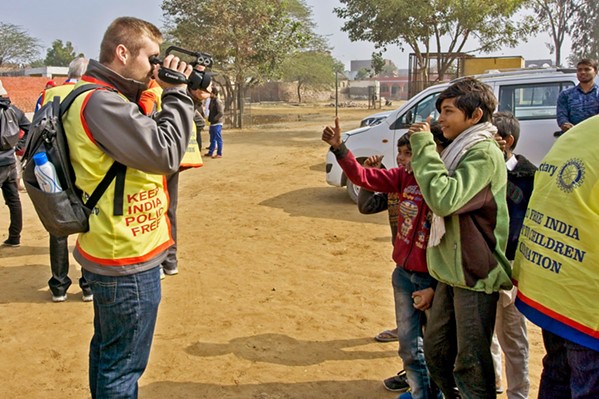 "Two Magic Drops is a 14-minute documentary shot during a two week period in India, in January 2020," Eriksen explained via email. "The film is about Rotary International's involvement in providing polio vaccinations to children."

It literally takes two oral drops to protect these children.

"So far, India has technically eradicated polio, but because of India's close prolixity to Pakistan and Afghanistan (the two countries who have not yet eradicated the disease), India is still seeing cases," Eriksen continued. "The trip took place during the World Immunization Day, in which Rotarians from across the world come together and attempt to immunize over 100 million kids over a five-day period. This involves going to some of the most impoverished villages in India around the Delhi area, literally walking door to door to inoculate children."

The film opens with gorgeous shots of India's impressive monuments, such as the Taj Mahal and Red Castle, as well as exotic wildlife like monkeys, but then it segues to India's slums, its impoverished children, and finally to Rotarian Brad Howard, who organized the trip Ericksen's brother, Soren, took to accompany their mother, a Modesto Rotarian. Though Soren hadn't planned to make a film, he borrowed a camcorder and started shooting. Later, back in the U.S., he handed the footage over to Eriksen, who cut it into the finished product currently available for free viewing on YouTube (youtu.be/BkuJR7TBxms).

You may want to have a box of tissues handy. Between learning that the area's biggest industry is collecting cow patties for fuel and discovering that the caste system is alive and well in India, you'll be moved by the cheerfulness of these children, the charitableness of American Rotarians, and the knowledge that Rotary's good work is changing lives not metaphorically but literally.

Not only is a new generation growing up free of the fear of polio, but Rotary and other organizations are helping Indians who suffer from the disease acquire prosthetic limbs and rehabilitation, or as Howard said, "helping those who didn't get the two drops ... live an upright life" instead of crawling on distorted and atrophied limbs.

The Dickens brothers grew up in Oakdale but came to SLO to attend Cal Poly, where Eriksen, 25, graduated with a BA in Philosophy in 2017, and Soren, 23, is still working toward his BA in Business Marketing. They started their media company in Soren's dorm room in 2016. 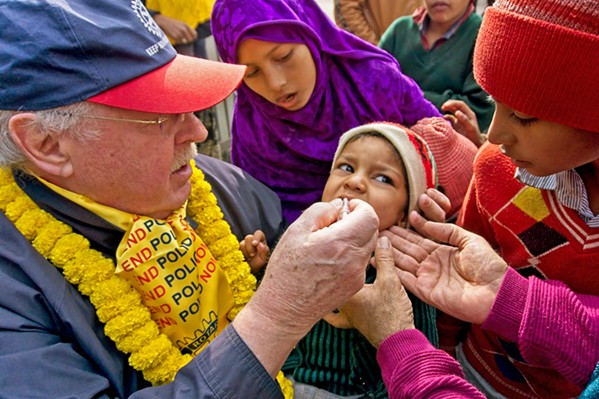 The self-taught brothers grew up making homemade films and "specialize in documentary-style filmmaking, having produced both short and long documentaries for clients and just as passion projects."

They say they "love telling stories about entrepreneurs and athletes," seeing as they're entrepreneurs themselves who grew up playing sports. The trip to India was truly something different and a real adventure for Soren.

"I couldn't believe how many people there were," he said via email. "All the different sights and the smells. So many smells I had never experienced before."

After his short tourist foray to the local sights, Soren and the Rotarians began the work they come for, inoculating every child under the age of 5. An Indian guide would lead them to vaccinate the children.

"The poverty was eye-opening," Soren said. "The people had so little—nothing like what we consider poverty in the U.S. But surprisingly, all the children seemed so happy despite their dire circumstances."

Informative, moving, and inspiring, Two Magic Drops is a reminder of the positive power of people when they come together to help. Even Eriksen, who wasn't able to attend the trip, immediately understood the impact of Soren's raw videotape.

"The footage was so shocking," Eriksen said. "Even though I didn't go, I felt like I was right there in it."

Over the next four months, Eriksen cut the raw material into a short documentary. Even though he had enough footage for a feature-length doc, he felt he "wanted to really show the gritty, fast-paced lifestyle of the Indians" and thought that if it was "a short documentary, people would actually watch it and be more apt to digest the whole thing."

They released the film last month, calling the feedback "tremendous." The brothers also submitted it to international film festivals, and it's already been accepted by four. They're "waiting to hear from 20 more" and "are in the process of also getting the film placed on Amazon to be used as a fundraiser for the Polio Plus Foundation."

"My trip to India changed my perspective on a lot of things" Soren said. "It made me realize how lucky we have it. I hope this film not only inspires people but restores a little faith in humanity."

Added Eriksen, "I was honored to be able to put the film together and hope to be able to actually go to India one day in person. I hope this film instills a sense of unity in people when they watch it. I think it can start a lot of good conversations and remind people the world really isn't as small as we sometimes pretend it is."

When Rotary began its global vaccination program more than 40 years ago, there were 350,000 new polio cases a year. Last year there were just 140. That's the power of people helping people. Δ