Local fishing voices are left out of offshore wind discussions 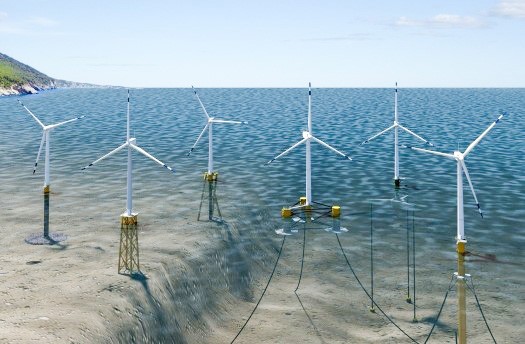 The waters off the shore of Morro Bay have been the focal point of a potential wind farm development site since 2015.

Between 2015 and 2017, a state intergovernmental task force that evaluated offshore wind power for the state of California was established, and its members included the Bureau of Ocean Energy Management (BOEM), the Morro Bay mayor and a City Council member, and regional state representatives. However, the fishing industry was largely left out.

At the time, the community engaged with the task force through public hearings to learn about the project's blueprints—although its potential impacts weren't shared. The project was halted in 2018 because the then-designated area conflicted with naval operations.

He characterizes it as a wind turbine gold rush.

One of President Joe Biden's first actions in office included issuing an executive order that called on the nation to build new American infrastructure and a clean economy in an effort to create millions of new jobs. It went hand in hand with his goal of eliminating greenhouse gas emissions from power plants by 2035.

This executive order commits to expanding opportunities for the offshore wind industry by producing 30 gigawatts (30,000 megawatts) of offshore wind by 2030. Meeting the 2030 goal aims to trigger a $12 billion per year capital investment in projects on both the west and east coasts, employing more than 44,000 workers in offshore wind by 2030, and adding nearly 33,000 other jobs in communities supported by offshore wind activity.

"We're just a little blown away at this whole thing. How we're being left out of this process, and we're the ones that are directly affected," Hafer said.

"People have said, 'Well you can just fish somewhere else.' But you can't fish anywhere else because that's where the fish are," Hafer said.

While fishermen could fish in other parts of the ocean, it could cause overcrowding and overfishing—catching too many fish at too high of a rate to allow the breeding population time to recover. Every fishery area has catch limits and other regulations.

"It's really helped with the fisheries, and that's because of the last 20 years of conservation that the [California Department of Fish and Wildlife] have put forward to sustain our fisheries," he said.

On top of these regulatory policies, fishermen have also worked around marine protected areas, which were once highly trafficked fishing areas. According to Fish and Wildlife, there are 29 protected areas in the region, covering 204 square miles, about 18 percent of Central California state waters. These protected areas include waters off the shores of San Mateo, Santa Cruz, Monterey, SLO, and Santa Barbara counties.

Areas where the fishermen are allowed to fish are becoming smaller and smaller.

New Times reached out to BOEM for comment but did not hear back before press time.

Although several developers have expressed interest in the area near Morro Bay, only one company, Castle Wind, has collaborated with the fishing industry for the past three years. Castle Wind proposes creating a floating offshore wind farm with 1,000 megawatts of energy capacity.

According to the company's website, the proposed project would be located 30 nautical miles offshore from Point Estero at a 2,600- to 3,600-feet water depth. Castle Wind sought to minimize impacts to migrating whales and other marine life by siting the project outside of known whale migration corridors.

Castle Wind has engaged with organizations and leaders within the fishing community, but there's no guarantee that it will be the project developer. Annie Hawkins, executive director for the Responsible Offshore Development Alliance (RODA), said that proactive engagement is needed from all agencies involved.

RODA was established and worked on the East Coast because there were concerns about the exclusion of fishing voices during offshore wind project discussions. Their first project was Block Island off the coast of Rhode Island, which is a five-turbine wind farm.

Both projects lacked involvement from the fishing community during the early phases, she said.

"[Developers, federal agencies, etc.] will reach out to fishermen, but there's always a very strong power imbalance, and it's always on the guise of 'we'll provide you with the information, and you can react to it,'" Hawkins said.

Hawkins said the state worked on fishing vessels with captains and crews to do cooperative research that generated a lot of partnerships with fishermen.

"When there's an effective upfront planning process and fishermen are really listened to and know that if they bring something forward people are going to honestly consider that, then you see different outcomes," she said.

For now, the fishing associations, organizations, and individuals that want to voice their concerns can only do so after BOEM public meetings are adjourned; there's a short break, and the public is allowed to make two-minute comments.

He said fisheries are used to working with the National Oceanic and Atmospheric Administration, Fish and Wildlife, and others to establish sustainable fishing methods and simultaneously protect the ocean. The lack of collaboration with BOEM, Conroy said, has been frustrating.

At this point, he and others have a lot of questions about the project and its potential impacts: What are the true ecological impacts of wind turbines? Could these structures change the migratory pattern of marine mammals? There isn't another floating wind farm in the state, so how confident are the developers that the project isn't going to backfire?

"If there is a perception that we are opposed to the thought of offshore wind, sure there are some fishing representatives who are, but for the most part we're not opposed to a well-thought-out, well-planned source of renewable energy," he said.

The fishermen would rather a developer ask them questions and give them more information about the proposed project.

"We've never been approached, 'Hey we're thinking about putting in an offshore wind farm, where can we put it to best minimize impacts to you guys?' In reality it feels like, 'Here's where it's going to go, deal with it.' That's the impression we're getting," Conroy said. Δ