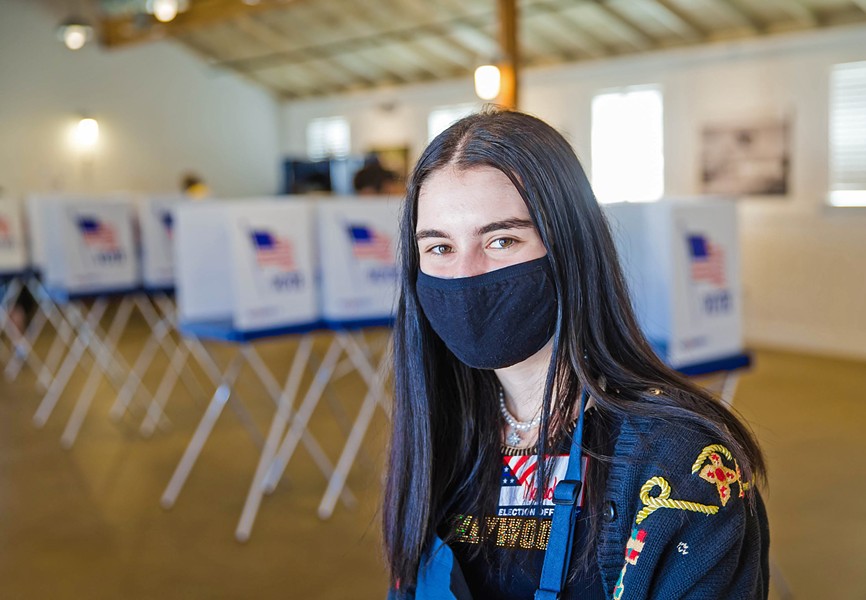 Mission Prep High School senior Maddie Haddad called the Nov. 3 election "arguably the most important election in modern times." And the 18-year-old wanted to do more than simply cast her first vote.

Haddad joined 62 of her high school peers between Oct. 31 and Election Day to volunteer their time at a San Luis Obispo County Vote Service Center.

For Haddad, it was a perfect opportunity to contribute to the democratic process for the first time.

"It feels extremely gratifying being able to help with this election," Haddad told New Times via email. "It is so important that young people get involved and show their passion for the future of our country. It is the first time that I and many other young people are able to vote, so I wanted to do my part in fulfilling this privilege that I now have."

Haddad spent two days volunteering at the Octagon Barn in SLO. Her main job, she said, was to help voters correctly submit their ballots at the ballot drop box. She also experienced a tense situation on Oct. 31 where a group of trucks with Donald Trump flags lined up across the street from the Octagon Barn.

"Obviously, it was a bit of a distraction, but I was mainly focused on just doing my job and helping the voters at the center," Haddad said. "Ultimately, our job was to make sure that we help those who showed up and voted—I would say that we were successful in doing so, despite the company outside."

While high school students have helped out with elections in SLO County before, their participation broke records this year.

"In the past, I've typically only gotten five to 10 students, maybe 15," said Ashley Gibson, an election official in the SLO County Clerk's Office.

Part of the surge was because SLO County Clerk-Recorder Tommy Gong turned student participation into a competition for the first time. The high school that brought out the most election volunteers gets "bragging rights and a trophy that will rotate between schools," according to a press release about the Student Poll Worker Challenge.

But a bigger reason, Gibson surmised, is that students are more enthusiastic than ever about this election.

"It's different than anything I've ever seen," she said. "I think the way things are politically, I think they're just ready to be involved and ready to help. It's been pretty awesome."

For Haddad, the real prize is simple.

"I'm very grateful to even have the opportunity to vote," she said.

• The city of Atascadero is offering a new outdoor fitness program for boys and girls in the sixth through eighth grades. The twice-a-week classes at the Colony Park Community Center will feature basic stretching and cardio, balance, and strength training, according to the city. Participants will be in groups of 10 or fewer, spaced out in their own activity stations. The program will run from Nov. 17 to Dec. 17, with signups available at atascadero.org/teencenter.

• The SLO Food Bank's annual Turkey Trot is going virtual. Participants can sign up at slofoodbank.org and plan a Thanksgiving walk, run, or hike "on their own or with family and closest friends at a location of their choice," according to the Food Bank. Everyone who registers will receive an event T-shirt and pair of DryMax socks, available for pickup at the Food Bank warehouse and the Cuesta College North County campus on Nov. 20. All proceeds help provide holiday meals to families in need. Δ