Local home design company gives back to children with disabilities

Ariana Lovato was raised on the Central Coast by Persian immigrant parents.

"I was first-generation born here, and very early, on it was instilled in us that you should be one of the four top professionals. You know, a dentist, lawyer, doctor, or engineer," Lovato said.

Her parents wanted her to be successful, and while she and her brother desired that as well, Lovato yearned to find her own path to success. 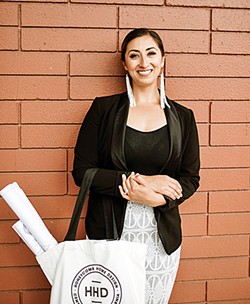 She followed a creative path of interior design, earning her associate degree at the Fashion Institute of Design & Merchandising (FIDM) and her bachelor's degree in business from the University of LaVerne, working as an assistant designer for five years, starting her own business, and winning several awards in her field.

"I was very drawn to interior design, and I kind of just paid attention to the ways spaces made you feel," Lovato said.

Lovato's business is called Honeycomb Home Design, and for the record, her parents are very proud of her successes thus far.

Honeycomb is a boutique interior design studio that specializes in kitchen and bath design, furnishings, remodels, and new construction.

Aside from meeting with her clients and understanding their vision for a room or a home, Lovato said she enjoys being on-site as construction begins so she can help work through inevitable issues that arise.

"That's what I think makes us a little bit different. We're not your typical decorator, and we're not just picking out throw pillows and area rugs. It's a little bit more than that," she said.

As part of being a local business owner, Lovato is always looking for ways to give back to her community. She was recently inspired to donate her time and skills to creating spaces for children with disabilities after working with a client whose son—with cerebral palsy—wasn't too happy to move into his parents' new home.

"He kept mentioning that the house didn't feel like his home," she said.

The scope of work that Lovato and her team were working on at the time was a kitchen remodel, so they weren't working on any other rooms in the home. She wanted to do something for him to make their new home feel comfortable.

Lovato gathered other designers and tradespeople in the area to raise enough funds to redecorate his room, paint it, and put motorized windows in.

"He was so surprised and happy, he couldn't stop smiling," she said.

This project was the first of its kind that she had been part of, and it's something that she wants to continue doing. The initiative is now called Honeycomb Gives Back, and she's looking for candidates who are in need of a room makeover. If anyone in the community wishes to nominate their own child or someone else who would benefit from a remodel, Lovato wants to hear from them.

She also wants to give back to young adults who are figuring out their own paths to success. Lovato said she would advise networking with people in their respective fields so that they can have mentors later on.

"They're people in the industry that I've either worked with in the past or perhaps they're just business owners that I look up to and I continually call on them for support or words of advice," she said.

• Paso Robles High School Student Tyler Schimke is the winner of the 2019 JB Dewar Tractor Restoration Program. With this accomplishment, he has advanced to compete in the Delo National Tractor Restoration Program in Indianapolis. This is Schimke's 10th year of participating in the program. He took first place at the California Mid-State Fair for his 1945 Farmall tractor. A portion of the national competition includes a public vote for favorite video, so community members are encouraged to cast their votes for Schimke before Oct. 26. To watch his video and cast your vote, visit delotrcvoting.com/voting. To learn more about the JB Dewar and its youth programs visit jbdewar.com. Δ