by William D'Urso and Karen Garcia

An off-duty lieutenant with the Santa Barbara County Sheriff's Office was arrested on Nov. 24 in Arroyo Grande on suspicion of disorderly conduct and public intoxication.

Two Arroyo Grande Police Department officers were dispatched to Rooster Creek Tavern on East Branch Street, where they found Brenda Maynard, who had reportedly been disturbing the peace. 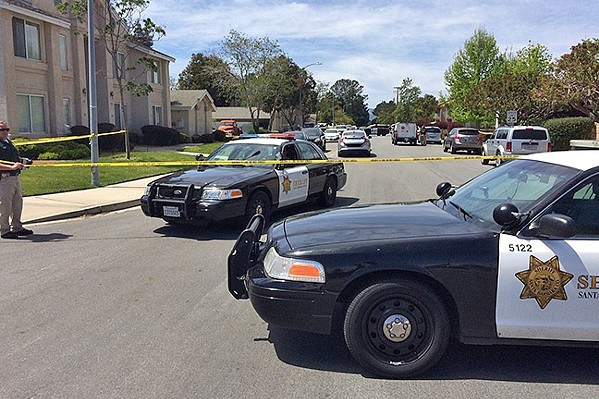 Maynard repeated multiple times that she was "off-duty law enforcement," according to a police department report, and was handing out her business card in the restaurant. Police officers said that Maynard had red glossy eyes, slurred speech, a staggered gait, and smelled like alcohol.

Police asked Maynard to go outside, which she did willingly.

On the way out of the restaurant, Maynard allegedly gave an officer her business card and said, "This is who I am." In the process of producing her ID, Maynard swayed back and forth and almost fell over but, according to police, was held up by of one of the officers.

"Maynard was having a hard time walking," the report said, and was assisted by both officers.

Police asked Maynard if she could contact someone to pick her up or if the officers could take her home. Maynard allegedly refused to contact anyone, and claimed that she wasn't intoxicated. She told police she was going to walk home and asked to speak to a supervisor.

After this exchange, police activated the microphone and camera in the squad car.

At this point, the arresting officer called a special police officer (SPO). The SPO arrived on scene and attempted to speak with Maynard, who allegedly became argumentative and uncooperative. She told police that she's been a lieutenant with the Santa Barbara County Sheriff's Office for 24 years, according to the report. While the SPO was contacting another officer, the report states that Maynard called the officers "idiots."

She told the officer, the "bottom line is I'm going," according to the report, and attempted to walk away. The officers tried to place her hands behind her back, but Maynard allegedly pulled away and stated, "Oh you guys are in fucking trouble."

The Santa Barbara County Sheriff's Office told the Sun it wouldn't comment on Maynard's case, saying that the department was still conducting a review.

Maynard is the second lieutenant from the Sheriff's Office to be arrested on alcohol-related charges in recent months. In September, Javier Jonathan Antunez, a custody deputy, was accused of driving under the influence of alcohol and causing a crash near Lake Cachuma, which injured multiple people. The Sheriff's Office would not comment on his case, saying it was also still under review. Δ