Stylish white chairs and a self-serving water station furnish the front waiting room of the Revive MD Medical Group facility. In the corner of the room, Dr. Laleh Shaban makes an appearance in a large colorful photo.

In the photo, she's sitting on stage at an Entrepreneurship Club of Harvard Business School event, pointing at the crowd and smiling.

"I've worked for a number of doctors, wonderful doctors, but I can say that Shaban is personally invested in her patients in a way that I don't usually see in medicine," Ali Wenzl, Revive's practice administrator says. 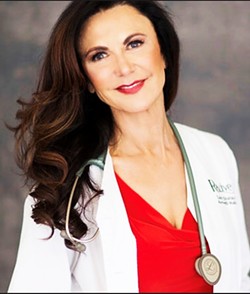 Wenzl is giving New Times a tour of the practice that promotes whole-body wellness through metabolic medicine as well as offering cosmetic services. According to the practice's website, the doctor is triple-board certified in internal medicine, geriatrics, and functional medicine.

But Shaban recently found herself at the center of a complaint the California Attorney General's Office filed with the Medical Board of California on Aug. 2. The complaint states that Shaban is under indictment for gross negligence regarding the treatment of her patients, citing five patients who received treatments between 2016 and 2018 and were interviewed by the Department of Consumer Affairs.

The document accuses Shaban of failing to obtain informed consent from patients, failing to accurately and adequately document and maintain patient history, failing to discuss the risks of treatment, and allowing non-licensed "health coaches" to administer treatments.

One of the patients in question sought Botox treatment in Morro Bay at a former Revive MD Medical Group center location, but was recommended to receive a different procedure instead, the document states. The accusation claims that the patient was never advised of its possible side effects and didn't complete a written form for consent of treatment.

According to the complaint, another patient, a 52-year-old member of the practice's Patient Access Program—which provides patients with a range of yearly services, as well as same-day appointments and discounts on some services, such as weight loss programs—went to Revive for a Shaban-recommended "brain-mapping" treatment, also called quantitative electroencephalography. The technical procedure, the Attorney General's Office claims, was performed by a non-licensed individual with the title "health coach," and the procedure, who performed it, and the results weren't recorded in the patient's medical records.

For the three other patients included in the attorney general's complaint, Shaban is accused of failing to document adequate patient histories. The complaint also states that Shaban's practice failed to comply with prescription documentation guidelines for two of the patients, failed to discuss treatment risks with one of the patients, and allowed non-licensed health coaches to prepare and discuss treatment for another patient.

In an emailed statement to New Times, Shaban said she started her practice more than 20 years ago with nothing but her patients' best interests in mind.

"Until recently, I've never had any claims of malpractice against me. Unfortunately, one of my former employees vowed to damage my reputation and disrupt my business by making false reports to authorities and news outlets," the email states. "My attorneys are working to prove many of the allegations made by the Attorney General's Office in the medical board complaint are false and to clear my name."

According to the attorney general's complaint, if Shaban is found guilty under the Medical Practice Act, her license could be revoked, she could be suspended for no longer than a year, and she could be required to pay the costs of probation, monitoring or any other discipline that the medical board deems appropriate.

Carlos Villatoro, a public information manager for the Medical Board of California, said the state agency receives complaints from a variety of sources: patients, hospital staff, law enforcement, social media, or news media outlets. Every complaint gets investigated.

Complaints of egregious violations such as sexual misconduct, over-prescription, or mental or physical impairment, Villatoro said, are investigated through the Department of Consumer Affairs Health Quality Investigation Unit.

The investigation entails interviews with the physician in question, the patients, and/or any witnesses who may have been in the room. Once the unit has wrapped up its investigation and feels that it has uncovered evidence that meets the burden of proof, Villatoro said the investigation is then sent to the state Attorney General's Office. If the attorney general believes that evidence does meet that burden of proof, the office files an accusation.

The accused physician has 15 days to file a notice of defense with the state Medical Board, which entitles them to a hearing in front of an administrative law judge.

Villatoro said Shaban's legal counsel did file a notice of defense and has a settlement conference scheduled for July 10, 2020, and a hearing scheduled for Aug. 24, 2020.

The Medical Board's mission, he said, is to protect the consumer by enforcing the Medical Practice Act.

"Anytime we have a complaint that needs to be investigated, we address it. That being said, the accusation is a charging document, and it doesn't mean that a physician is automatically guilty of anything," Villatoro said.

An individual within the medical and aesthetic field on the Central Coast, who asked to remain anonymous, said their practice has received former patients from Revive MD Medical Group who were unhappy with their experience.

He said that in the practice that he's involved with, the doctor administers all procedures, something that he's heard Shaban doesn't do.

An unnamed former employee posted a review of the practice on GlassDoor—a website where current and former employees can review their employer—claiming that Shaban employs family members who are unlicensed.

"The owner is cheap and has everyone in her family working there from her husband, daughter, mother-in-law ... But they are on payroll, [human resources], and other health coaches. I was there a year and I think they fired seven to eight people. I wouldn't wish this place on my worst enemy—seriously," the review stated.

During New Times' recent tour of Revive, Wenzl says the practice has licensed registered nurses who operate and administer the IV clinic, laser treatment, and other cosmetic services. Shaban, Wenzl says, may administer any of her offered procedures, but she focuses on her primary concierge patients.

She says while the accusation that was filed has been difficult for Shaban, the doctor has also received an outpouring of support from her current patients.

"In the meantime, I am doing my best to stay positive and focus my energy on patient care and serving the community of San Luis Obispo," Shaban's emailed statement read. Δ