A complaint filed by the California Attorney General's Office against local medical and cosmetic physician Dr. Laleh Shaban in 2019 accused her of gross negligence—claims she says came from a disgruntled former employee—however, the doctor has reached a settlement in the complaint. 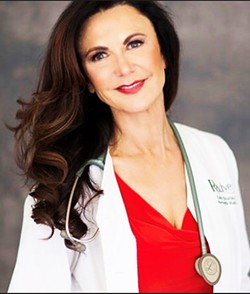 After several years of disputing the allegations, Shaban signed a settlement agreement in July 2020. She will continue operating her practice, Revive MD Medical Group, and providing her patients with aesthetic services and wellness packages. Shaban is triple-board certified in internal medicine, geriatrics, and functional medicine. Through her practice, she has offered concierge services for primary care and cosmetic services. Her approach is promoting whole-body wellness through metabolic medicine.

Shaban has decided to discontinue the concierge medical portion of the practice to focus her energies solely on her cosmetic practice, which has been growing steadily over the last year despite the complaint controversy, according to Revive's Practice Administrator Ali Wenzl.

According to complaint documents obtained by New Times, under the terms of the settlement agreement with the Medical Board of California, which took effect on Dec. 31, Shaban is under a five-year probation period during which she must complete a course in medical record-keeping, a professionalism program, a clinical competence assessment program, and acquire a practice monitor.

The practice monitor must be a licensed physician or surgeon whose license is valid, is in good standing, is preferably certified by the American Board of Medical Specialities, and has no prior business or personal relationship with Shaban. During the probation period, Shaban is prohibited from prescribing and performing human chorionic gonadotropin treatments (a hormone for maternal recognition of pregnancy) or platelet-rich plasma procedures (procedures that accelerate the healing of injured tendons, ligaments, muscles, and joints) until she has successfully completed the clinical competence assessment program, the settlement document states.

Shaban has to provide a copy of the settlement agreement and accusation to every hospital where privileges of membership are extended to her, to any other facility where Shaban engages in medical practice, and to every insurance carrier that extends malpractice insurance coverage to her.

A press release from Shaban's office states that agreeing to the settlement is not an admission of guilt.

"It was approved by the state Medical Board, which licenses and regulates physicians, surgeons, and other health-care professionals in California," the statement read.

"I have always strived to provide the best possible medical care in a professional manner since I began practicing medicine in 1996 and I will continue to do so," Shaban said in the statement.

The Attorney General's Office's complaint accused Shaban of gross negligence in regards to five patients who received treatment between 2016 and 2018. The complaint stated that Shaban failed to obtain informed consent from patients, failed to accurately and adequately document and maintain patient history, failed to discuss the risks of treatment, and allowed non-licensed "health coaches" to administer treatments.

Shaban previously told New Times in an emailed statement that she had never had any malpractice claims filed against her until the Attorney General's Office filed its complaint with the Medical Board.

"Unfortunately one of my former employees vowed to damage my reputation and disrupt my business by making false reports to authorities and news outlets," Shaban said at the time.

In the recent press release, the office reiterated that Shaban denies many of the charges against her and attributes them to high employee turnover that she has since resolved.

"The extensive investigation undertaken by the Medical Board has taken a toll, however, and a trial would exacerbate the expense and stress on my ability to practice," Shaban said in the release. "It is time to put this behind me and to focus all my energy on caring for my patients."