The Morro Bay Open Space Alliance purchased Cerrito Peak, also known as Eagle Rock, from the city of Morro Bay in April, a move that will preserve the open space for residents and visitors alike.

During the May 11 Morro Bay City Council meeting, nonprofit co-chair Glenn Silloway spoke during public comment, saying that the Alliance had finally finished its project to conserve Eagle Rock by recording a conservation easement agreement with the city on the property's deed.

"This will bind future owners to keep Eagle Rock as an open space in perpetuity," Silloway said. "It's finally a done deal."

Within this agreement, the city will retain ownership and continue routine maintenance of the open space.

"Public use of the open space will contine as always, free and open to the public for walks, picnics, or just a refreshing pause in a natural place with stunning views," he said.

The Morro Bay Open Space Alliance started working to secure the open space after the Morro Bay City Council voted to purchase it with the city's general fund emergency reserve in 2017. The city purchased the $350,000 space with the intention of selling the property to a nonprofit for permanent open space preservation.

Since then, the nonprofit has raised $265,000 to pay the city for the conservation easement agreement. 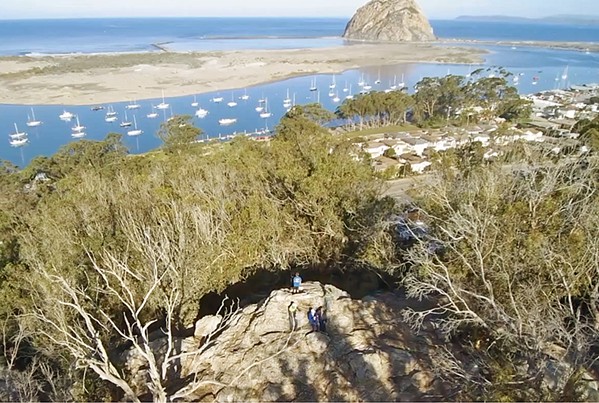 Among the several board members and "super volunteers" Silloway thanked, he gave a special thanks to nonprofit Finance Chair Nicole Dorfman and her team. Dorfman's team garnered contributions from 175 neighbors, supporters, local foundations, and businesses, which Silloway said "says a lot of good things about Morro Bay."

Silloway told New Times that he's very proud of the small, all-volunteer organization that worked really hard to connect with and promote Eagle Rock as an open space. Eagle Rock, he said, is in the middle of South Morro Bay near the ocean and it's part of the same volcanic system that produced the Nine Sisters, including Morro Rock.

The peak also has cultural significance, as the nonprofit learned of its listing on the Native American Heritage Commission's Sacred Land Inventory along with the remains of a rock that was used to grind acorns.

"It's a wonderful place to keep," he said.

The preservation project has come a long way from the city's initial controversial move to approve construction of a home on the peak in 2011. Morro Bay previously approved plans for the construction project, however a local nonprofit, Save the Park, filed a lawsuit against the city in 2012 for not properly conducting an environmental review of the project site.

The lawsuit stated that the eucalyptus-covered peak is a scenic landmark, monarch butterfly habitat, and the site of archaelogical remains. Eagle Rock was used by the public as an open space, but the land belonged to Janne Reddell.

The home was supposed to be for Reddell and her husband, however the lawsuit's resolution would have mandated Reddell to conduct an environmental review of the property. Instead, she reached out to the city to see if it would purchase the land and keep it open to the public.

"[Morro Bay] has some very contentious issues, but when push comes to shove we get together and can make good things happen," Silloway said. Δ