With a focus on addressing violence and instigating sustainable change, the NAACP SLO County branch is hosting an action on June 4 in front of the San Luis Obispo County Courthouse at 5 p.m.

"The hashtag we have is #WeAreDoneDying, but nobody is going to stop dying as long as we spend our lives thinking violence is going to keep us safe," said Stephen Vines, president of the local branch. "Violence only begets violence, that's it. ... It's not the police this and that; it's their policies, and to change that it takes civic engagement." 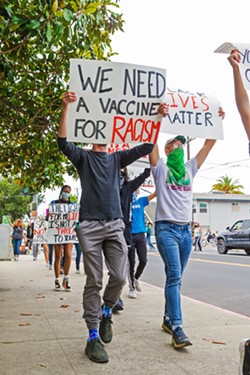 The current movement has many layers, Vines said, that include race, racial discrimination, inequality, and social class. But in that fight, we have a tendency to forget the larger scope of the issue, he said, which is that we live in an imperialist society and an oppressive system.

The goal of the June 4 rally is to garner attention for long-term action through local civic engagement. The event will include speakers, educational booths, and a motion to pledge time toward involvement—whether it be knocking on doors, attending City Council meetings, joining a citizens advisory board, or getting educated on public policy.

"This is about building community power," Vines said.

Previous actions included a peaceful rally on May 31 organized by R.A.C.E. Matters SLO County to focus on supporting black lives in the face of hostility, aggression, and terror. But on June 1, another protest in SLO ended in tear gas and pepper ball rounds, followed by an unrelated incident of vandalism downtown.

"While we are proud and honored to have a leadership role in the struggle for racial justice in our community, we do not pretend to be the sole force at work in the current protests. This is a coalition movement, with many elements and groups involved, sometimes with different ideas and strategies for moving forward," the statement read. "This moment is preceded by 400 years of anti-black racial terror, and our focus is supporting and uplifting black people. Property damage distracts and detracts from this focus. However, shifting the narrative and focus to property damage is similarly distracting. Check on your black friends." Δ