Courtesy Images By Taffy French-Gray BETWEEN THE LINES Taffy French-Gray's latest paintings depict a variety of individuals spending a typical day at the beach. "People are generally relaxed at the beach, enjoying the day and the warmth, and when not throwing Frisbees or surfing, they are generally sitting still reading or sunbathing, which makes them easy to draw," the artist said.

The Valley Art Gallery presents Life's a Beach: Avila to Venice, an exhibit of oil paintings by local artist Taffy French-Gray, at the Santa Maria Airport through the end of September. French-Gray will be hosting a special artist talk and guided tour of the exhibit on Sept. 19, from 2 to 4 p.m. The airport is located at 3217 Terminal Drive, Santa Maria. Visit valleygallery.org for more info.

Although she was born in New York City, Taffy French-Gray attributes many of her favorite childhood memories to San Luis Obispo, where her family moved when she was 5 years old.

"Growing up in SLO was altogether a wonderful experience," the local artist said. "My family lived near Cal Poly, so we used their tennis courts, basketball courts, and playing fields as if they were our own. We were walking distance to Cal Poly football games."

When not traveling on foot or riding her bike with friends, French-Gray loved when her parents would take the family on Sunday drives, "with all five kids and the dog in the back, exploring the backroads and rural areas of SLO County," she said.

One of these nostalgic backroads led to Avila Beach, which became the backdrop of many of French-Gray's oil paintings—from seascapes to figure and still life pieces.

"Many summer days were spent at the beach, usually Avila," recalled the artist, whose latest solo exhibition features said locale in its title, Life's a Beach: Avila to Venice, currently on display at the Santa Maria Airport.

This beach-themed exhibit was organized by Orcutt's Valley Art Gallery and is slated to remain on display in the airport's lobby through the end of September. French-Gray's figure paintings in the show depict a variety of characters spending their day at the beach in different ways, based on sketches she's drawn during various outings over the years. 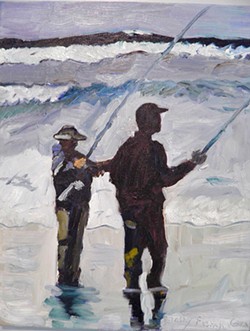 "People are generally relaxed at the beach, enjoying the day and the warmth, and when not throwing Frisbees or surfing, they are generally sitting still reading or sunbathing, which makes them easy to draw," said French-Gray, who rarely goes anywhere without a sketchbook in hand.

Throughout her life, French-Gray would draw and paint as a hobby, but she began to take her art more seriously after retiring from her career in nursing. Free time after retirement allowed her to join a weekly figure drawing group and attend art classes at Allan Hancock College in Santa Maria (the city she currently resides in).

One of these classes cemented her love for painting pieces based around the beach, the artist explained.

"The assignment was to study the effect of backlight on my subject," French-Gray recalled of the inciting incident. "What better place to accomplish this than the beach with all the sunlight?"

During her art studies, French-Gray became inspired by painters like Henri Matisse (1869-1954), and continuously strives to emulate his use of "bold color in simplified forms," she said.

She also finds inspiration in the works of Henry Hensche (1899-1992), who aimed to depict shades of light as accurately as possible, another constant goal of French-Gray in her own artworks.

Out of all the oil paintings featured in her latest Santa Maria exhibit, French-Gray is most proud of "the one of the two fishermen," she said, referring to her portrait of two silhouetted figures armed with fishing poles, standing on a shore with the ocean water up to their feet. Abstract strokes of crashing waves can be interpreted in the distance.

"This painting 'painted itself.' That happens sometimes, but not frequently. I like the relaxed posture of the fishermen and the monochrome palette," said French-Gray, who can fondly recall fishing trips from her own childhood, usually to Lake Nacimiento.

French-Gray's former career as a traveling RN took her (and her sketchbooks) to many states across the country (Alaska, Colorado, West Virginia), and outside the country as well (Somalia, Russia, and other countries). The retired nurse said she didn't realize how exceptional the Central Coast truly is until embarking on these travels. She described one trip to Hawaii as a specific example.

"When I walked out of the air-conditioned airplane into the hot, humid Hawaii evening, I began to understand," French-Gray said. "We have such good air quality, beautiful beaches, lovely scenery, wineries, and minimal bugs."

The artist summed up her love for the area by alluding to the lyrics of "Take Me Home, Country Roads."