Pilates instructor and mother of three Natalie Garay is striving to build a foundation for mothers and all females locally. Currently Garay helps women rehabilitate physically and mentally after giving birth. She focuses on a female's pelvic floor weakness, C-section rehabilitation, and any major abdominal surgeries. 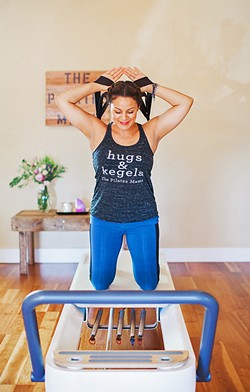 Garay is now working on two projects to expand her one-on-one work with women and to strengthen the female community in the area. She works with her clients virtually and in her new studio in San Luis Obispo, but Garay wants to create a facility that acts as a gathering place for women.

"I'm envisioning a barn that's basically the ultimate healing facility for moms or women in general, where we have more than one pilates instructor, massage therapists, acupuncturists, and a gathering space where they can meet and have tea or green juice with bubbly," she said.

She wants the barn to also have a boutique to house locally made goods and an upstairs space with a long communal table for community events, dinner parties, brunches, Mother's Day celebrations, and other events for locals. The upstairs, Garay said, would also be a space for her to host the get-togethers that she currently has. For certain holidays, Garay assembles a group of women to create goodie bags to donate to Stand Strong, RISE SLO, and Give SLO (a new nonprofit that's currently forming).

In order to make that vision a reality, Garay is asking for monetary donations or for current and future clients to sign up for memberships. Memberships are pre-purchased services such as a pilates session that can be found on her website, youneedtherhappy.com.

Her second project is a book called Stories of Mamas on the Central Coast, which will be a collection of stories and interviews with women about their birth experience.

"I say that lightly because we also have stories of adoptive moms, surrogates, and women that haven't actually birthed but who have been pregnant but had a loss," she said.

Garay said the back of the book is dedicated to local providers in the community who support women before, during, and after birth.

"The stories when they're shared—the good, bad, and the ugly—is a healing process for moms, but in the witness too, it's just inspiring. That was one of the reasons why I wanted to create the books," she said.

A book like this is a way for females to understand that they're not alone in any stage of motherhood. Garay said she has five more interviews to conduct, but the book should be hitting the stands soon.

Her major goal is to help women get in touch with their bodies and build up confidence at any stage of motherhood. It started when she learned about new mothers experiencing a weak pelvic floor with no recommendations for care or rehabilitation.

Having a weak pelvic floor means that a female could experience bladder leakage. Garay said this symptom could lead to reduced time playing with kids or leaving the house. More extreme symptoms could include pelvic organs falling and resulting in a prolapsed bladder, prolapsed uterus, or even a prolapsed rectum.

With her twice-a-week, one-on-one sessions and essence remedies, Garay helps women focus on reconnecting with their abdominals and strengthening their physical foundation.

In April, the Paso Robles Horse Park hosted its first United States Equestrian Federation (USEF) A-Rated show. The event took place April 17 through 21 and offered more than $100,000 in prize money. The Paso Robles Horse Park opened its doors in 2015, and this year the park is venturing into a full schedule featuring four schooling shows, three weeks of USEF B-Rated shows, and four weeks of Classic Series A and B-Rated. To learn more about the facility, visit pasorobleshorsepark.com or call (805) 369-1338. Δ